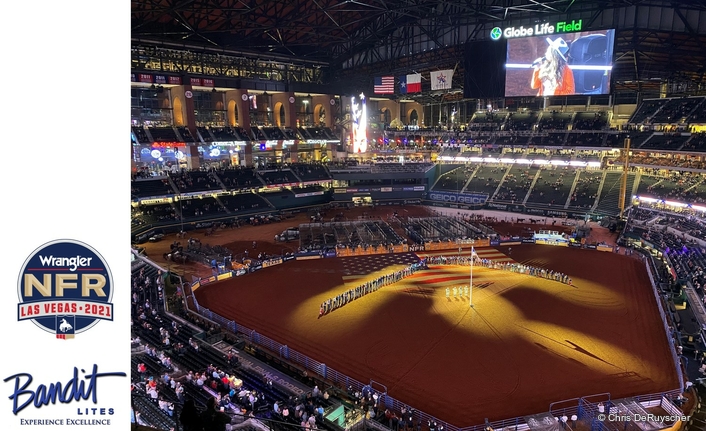 “The Elation Proteus Maximus was the workhorse of the rodeo this year, providing everything from crowd ballys to fill and backlight for broadcast,” explained Chris Noll. “They were also loaded with custom PRCA gobos, utilized primarily during doors to help fill the space on the dirt.”

While the event was held indoors, the IP rating on the Proteus Maximus provided much needed protection from dust, especially since accessing the fixtures would have been a challenge once the rest of the production had loaded in. 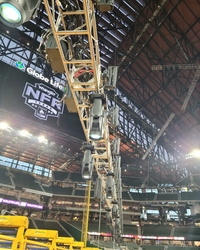 “The Elation ACL360 Bars were the eye candy of the rig with their tight beam angles and infinite movement,” Noll said. “They were used primarily during hype videos to add to the Proteus in ballys or provide movement while the spots were called on for other tasks.”

In addition to choosing hardy fixtures, Bandit’s team had to ensure the lighting could fill out the massive arena space while accounting for sky cameras. Trim height had to be over 90 feet and trusses towards the center so as to not impede the wires supporting the cameras as they moved about the arena, meaning all the front light was to come from the follow spots on the concourse.

Prior to each opening, the team would frame out a rough sequence of events and a final look, allowing the producers and opening show caller opportunities for input. Then the team would go back through and build out each of the individual looks and clean up transitions to get it show ready.

“The lighting was an ever-evolving thing as we were adding new elements every night, each of which had different requirements lighting wise,” Noll said.

And while Noll joked this “wasn’t his first rodeo” (while noting it technically was his first rodeo), he maneuvered his way through all the unusual challenges a rodeo can bring with aplomb and confidence.

“The main difference on this show compared to every other show was the need to work around the horses and animals in the production,” he said. “Tasks like tracking four riders carrying flags get more complicated when their horses don't like being lit in certain ways or seeing movement off to the sides. We adjusted looks several times to make sure the riders and their horses felt comfortable.”