Back from the USA 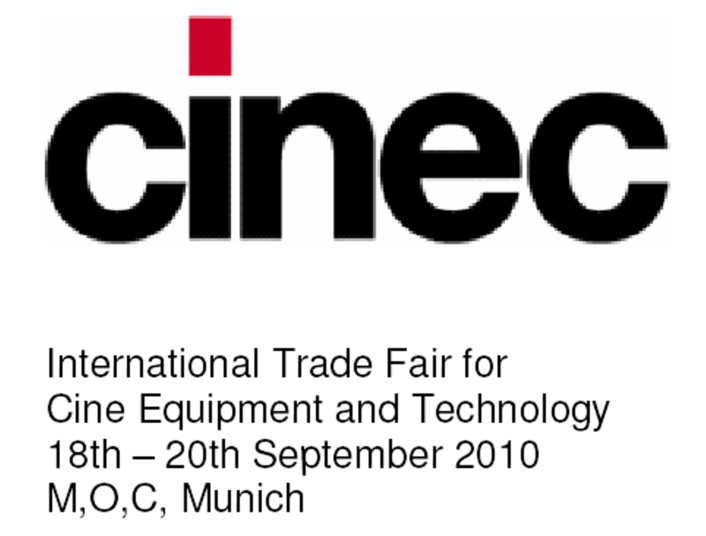 Cine Equipment & Technology
On April 15th, the world’s largest trade fair for film and television technology ended. For some people the journey back home from the NAB in Las Vegas took longer than expected – due to the volcanic eruption in Iceland which suspended the air traffic. However, the trip was worth it. Producers from all over the world presented their technological innovations which are designed to facilitate the work in the film industry and to open up new dimensions. Numerous of these new products can be seen for the first time in Germany at the cinec from 18th to 20th September.

Eagerly awaited has been Arnold & Richter’s “Alexa”, which is “not just another digital camera, but an Arri”, as the global market leader in the field of film cameras proudly emphasizes. For its development the Munich company combined more than 80 years of experience with modern digital technology. “Alexa” is equipped with a new CMOS-sensor and supports the „ProRes“-Codecs, which use Apple’s editing software “Final Cut Studio”. This will make the workflow much easier, the manufacturer says. The compressed HD-pictures are recorded on memory cards, are available on computer at once and can be edited without any further transcoding. The cameras are ergonomically designed, lightweight and flexible, which makes them suitable for the application in studio as well as “on location”. Right now, Roland Emmerich (“Independence Day”) and his DoP Anna Foerster („Coronado“) are shooting “Anonymous” in the Studio Babelsberg – and they are gathering work experience with the new technology.

P+S Technik intend to close the gap between digital and traditional film shooting with their “16Digital SR Mag”. The Munich company is known for its innovative developments for both worlds. P+S Technik convert a common “Arri 16SR”-camera into a “state-of-the-art”-instrument for digital cinematography: The “16Digital SR Mag” resembles a film magazine and takes its space in the camera. But inside a sensor with a resolution of 1920 x 1080 records HD-raw-data with up to 60 fps. Accessories and handling remain as usual, even the magazine can be put back in place if needed.

When developing new viewfinders for professional HD-camera systems, Sony focuses on the OLED-technology. The “HDVF-EL70” for studio cameras and the “HDVF-EL75” for portable camcorders offer a screen size of 7.4 inches. The new archetypes, which will probably be showcased at the booths of numerous distributors at the cinec, are supposed to satisfy through their high resolution. On top of that, Sony developed two new 5-inch-LCD-models, the high definition viewfinder “HDVF-C550W” and the “DXF-C50W” for standard definition.

With its new handle bar and the shoulder support, Chrosziel offers two new proVideo-accessories for lightweight video- and dSLR-cameras with video function. The 205 gram light handle bar is an addition for video cameras with built-in shoulder pads. It can be mounted on all light weight supports with 15 mm rods and is fixed with a knurled knob onto both rods. The hand grips are angled and can be rotated around their fixing freely.An extra shoulder support can be added for cameras without a shoulder pad, such as all dSLR cameras. If a tripod plate is fitted, it does not have to be taken off, a fast swap between tripod and shoulder is possible.

Panther already brought its new generation of dollies to the market last year. With its three column system, the “Tristar” is the lowest electromechanic column dolly worldwide. Its “range” from near ground level to two metres realises a central camera position on eye level, which means: Camera movements from a sitting to a standing person are possible without a time-consuming conversion of the dolly.

With the additional specification “S1”, Sachtler introduced a further development of its well-established fluid heads “Video 18” and “Video 20” in Las Vegas. The new models can also be used with DSLR-cameras with HD video function. The counterbalance of the “Video 18 S1“ and the “Video 20 S1“ fluid heads has been increased to 16 steps which allows for especially fine adjustment. A “boost button” guarantees a quick payload range shift. The “Video 20 S1” now offers a minimum payload of two kilograms instead of seven.

For underwater imaging, the expert Marlin offers its new tripod “Aquatica”. It consists of solid aluminium, is anodized and teflon coated. As standard parts are used, the expenses can be kept low – and the tripod legs can be used as components for light arms. By being extremely lightweight and demountable, it fulfills all the special needs it is constructed for. Besides, it is expandable and fits all housings.

MBF Filmtechnik received special honours. In the run-up to the NAB, the company from Frankfurt and Matthias Uhlig were assigned a prize from Jon Fauer’s “Film & Digital Times”. The “Ron Dexter Award” was given for the development of the first PL-adapter for Canon EOS-cameras.

Come and see – in the M,O,C, Event Center in Munich!

You can experience the novelties mentioned above as well as various others at the cinec from 18th to 20th September. The best developments will be examined by a professional jury and awarded the cinecAward, one of the most important prizes in the field of film technology. The festive state reception by the State of Bavaria will take place in Munich’s Residenz on Sunday, September 19th.