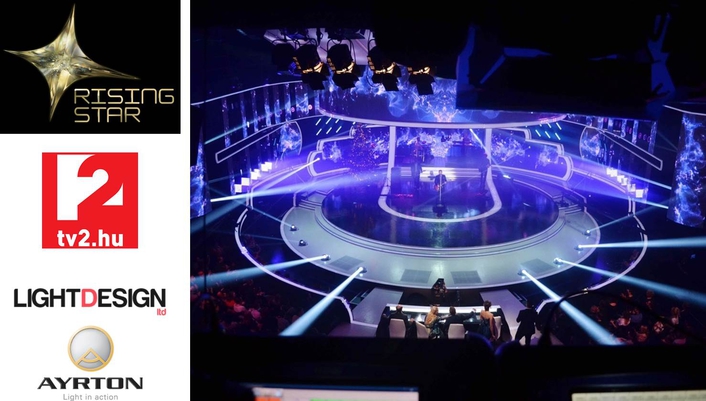 .
Ayrton’s dynamic MagicPanel™-R and MagicBlade™-R LED lighting fixtures formed key elements in Light Design Kft’s lighting of the interactive singing contest Rising Star Hungary, the Grand Finale of which broke all ratings records in February 2015. The competition took place over three months and was broadcast on television networks across Hungary and the neighbouring countries.

The Ayrton fixtures were incorporated into a dazzling set of curved LED walls which displayed video content and abstract imagery throughout the show. Twenty-four MagicPanel™-R and twenty-four MagicBlade™-R luminaires were rigged between the LED walls where they served as a homogenous surface for video display as well as performing as standard moving head fixtures. Several of the Ayrton fixtures’ on-board functions were then used to create a wide range of effects in keeping with the mapping and choreography for the music.

“We chose the MagicPanel-R and MagicBlade-R units for Rising Star Hungary because we were looking for a way to display video signals on moving head fixtures while still being able to use them as regular robotic lamps,” says Tibor Kalla, leading lighting designer at Budapest-based design company, Light Design Kft. 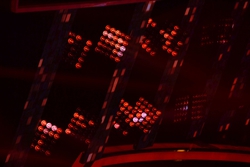 “The license of the show called for pixel mapping technology and a series of moving head lanterns that we could control with our own customised control system. The Ayrton MagicPanel-R and MagicBlade-R were ideal for this purpose. We were able to pixel map the units and display video information across them too. The video signals which ran through the system onto the LED screens also appeared on the Ayrton fixtures with each Ayrton LED acting as an individual pixel. The more pixels we had, the better the result!”

The team at Light Design were first introduced to MagicBlade-R and MagicPanel-R online: “We have been looking for a fixture that will serve our needs in the pixel mapping procedure in Hungary for a long time into the future, but which can also be used as a full functional moving head,” says Light Design Kft director, Krisztian Karmazsin. “We had seen convincing demo videos from Ayrton on the web, and when we saw the fixtures for real at Prolight + Sound in Frankfurt we were convinced that we found what we have been looking for. We had been working on the case for three years before we came to a final solution and are grateful to Valère Huart-Gyors from Ayrton who gave us a lot of help to find the best solution for us.”

For Rising Star Hungary, the MagicPanel-R and MagicBlade-R fixtures were used in extended mode to provide separate access to every single pixel/LED. “We loved the units for their colour correctness, brightness, the effect possibilities provided by the 5x5 raster, the low power consumption, the easy set-up and so on,” continues Kalla.

“Both the MagicPanels and the MagicBlades are easy to mount, rig and set-up and work perfectly even when mounted in a 90° rotated position. We can use the endless, unlimited pan and tilt movement on both of the axes without experiencing any problem and obtained accurate, precise and very dynamic movements.”

Light Design also found the wide range of protocols, which includes Art-Net, DMX-RDM and WDMX, useful, and chose to operate with Art-Net in full mode, controlled by a Road Hog Full Boar, to take advantage of the controllability afforded by the greater number of channels available. 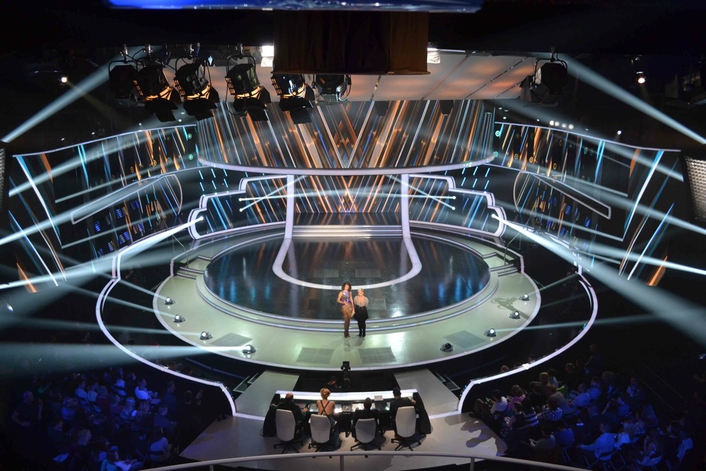 “Rising Star Hungary was the first installation of Ayrton MagicPanel-R and MagicBlade-R for Light Design, but we have so many new ideas already that our devotion is going to be long lasting for sure!” says Karmazsin. “Our designers have accommodated themselves to the new opportunities these fixtures offer and we are able to develop new dimensions in the studios and in concert environments thanks to their advanced LED technology and outstanding optics. The fixtures have more than fulfilled our expectations.”