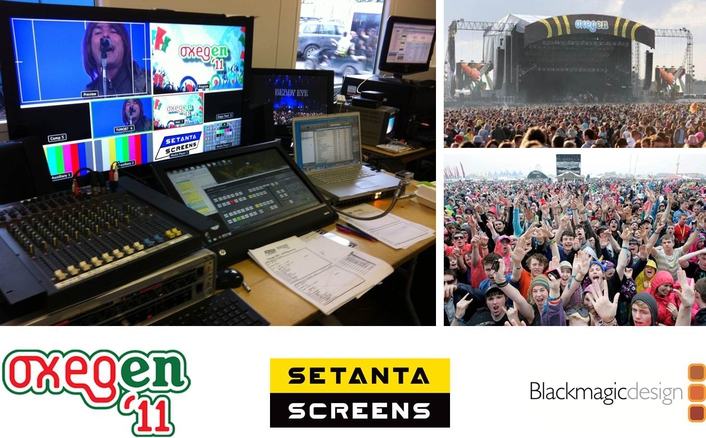 Since its opening in 2004, Oxegen festival has hosted a variety of top international performances, including The Who’s first appearance in Ireland in more than 35 years. This year’s event saw Beyonce, Coldplay, Black Eyed Peas and Foo Fighters take the main stage, along with hundreds of other artists from around the globe.

Moriarty said, “We received the ATEM a few days before the event and I set it up in my living room by connecting to my plasma TV to test the multi viewer. It was very easy to set up and I found my way around the hardware and software quite quickly.”

“Using the software based mixing panel was easy. There was no steep learning curve and having read the manual regarding importing graphics, I found it was simple to use. Our overall decision lied in the fact that it was good value for money, there are a range of inputs and outputs, and the ease of set up and use made all sources synced. We look forward to using more Blackmagic and ATEM products on our upcoming events.”

Empower live creativity with the new ATEM product switchers! For the first time extremely powerful broadcast grade features, incredibly small size and low cost have been designed in a live production switcher! ATEM production switchers include 4 upstream keyers each with independent chroma, shaped and linear keying, 2 downstream keyers, stinger effects, graphic wipes, media players for stills and clips and a built in DVE for amazing DVE transitions or key repositioning. For portable use, the built in Multi View showing all cameras, preview and program can be viewed on a single SDI or HDMI monitor.

ATEM also includes loads of HDMI and SDI inputs allowing both professional SDI cameras as well as consumer HDMI cameras and computers to be connected. Only ATEM allows low cost HDMI consumer cameras in a professional switcher so it's easy for customers starting out in live production! ATEM includes a free software control panel and media pool management software for Mac OS X and Windows XP. ATEM is sold independently of the hardware control panel allowing lower initial cost and greater customization. ATEM retails for only US$2,495.

Based in Dublin, Ireland, Setanta Screens is long established as a world-class service provider with the highest calibre of technology and expertise. Setanta carries one of Europe’s largest LED screen stocks. Over 250m² of LED screens of various types enable Setanta to deliver bespoke solutions for any kind of event or requirement, short term or long term. With three mobile screen units and 130m² of modular LED stock, Setanta has the flexibility to offer all options to all clients.