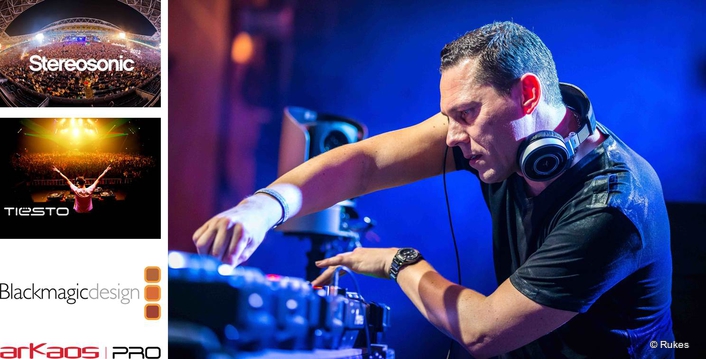 .
One of the world’s top DJs, Tiësto, performed to mass audiences in front of a spectacular backdrop of ArKaos MediaMaster visuals at the Stereosonic festival in Australia at the end of 2012. Now in its sixth year, Stereosonic is unofficially Australia’s number one electronic music festival attracting over 170,000 people.

Dutch super-DJ, Tiësto, is a universal phenomenon, having been the world’s leading DJ for over 15 years. He is a king of dance music with a special ability to adapt and develop new dance sounds and always guaranteed to put on a spectacular show.

Tiësto’s Stereosonic stage set consisted of 3 separate screens with a main screen of 12mm Flyer LED wall located behind the DJ and DJ booth. The main screen was flanked by 12 panels of LC panels and the wings covered with 195 panels of 30mm Spider placed in a random board pattern.

Using an ArKaos MediaMaster Pro 3.1 on a Macbook Pro Retina with maximum specification, Tiësto Lighting Designer, Koen De Puysseleir, was able to create a media server with 2 full-size outputs. One physical output to the screen was created using a Thunderbolt converted to DVI, the second output by using the HDMI output of the Macbook . Both were used at full HD resolution with the Thunderbolt sending images to the centre screen and two on-stage side screens, and the HDMI feeding all side screens on the wings.

In addition to the outputs, a second Thunderbolt slot was used to plug a capture card to feed an input card into the server. De Puysseleir used a BlackMagic UltraStudio 3D graphical card for HDMI input.

The full MediaMaster Pro was controlled using a ChamSys MQ100 including wings. All mapping was handled by MediaMaster’s new VideoMapper feature with which De Puysseleir was able to map out the randomly-placed LED wall components on the wings and successfully integrate them with the central and side screens.

We had no Pixelmap available, but the Arkaos VideoMapper enabled me to set up the screens easily during the daytime prior to the show,” says De Puysseleir. “It works very intuitively and I was able to create different setups for the ways I wanted to show my content in an incredibly short time. Before VideoMapper this was a big hassle, but now it can be done in under an hour and that is pretty incredible knowing how nearly impossible this was before ArKaos made this new addition to their software.”

De Puysseleir was able to operate each of the screens as single output sources, but could easily change the setup to become one big screen capable of integrating all the different pixels pitches into one huge, homogenous image.

“I love the fact that the VideoMapper can speak to more than one output,” says De Puysseleir. “this mapper is a truly amazing extension to the ArKaos software”. “Previously I used MadMapper which was a good solution at the time but it is a stand-alone application that doesn't talk directly with any server. The ArKaos VideoMapper literally blows it away. It means you can now do things with only one server which might have needed five or ten different servers for before.”

“I have played with a lot of servers and, so far for me, ArKaos is the one to beat. With only one product you can design for anything from the smallest club show to the biggest festival or production show and the only thing you need to change is the mapping. It’s pretty incredible if you ask me!”

About ArKaos Pro
ArKaos Pro is a division with ArKaos - leading provider of real-time visual processing technologies for live visual performances. Founded in 1996, ArKaos has been a pioneer in interactive video technologies since the emergence of VJing to todays wide spread use of LED and projection technologies. ArKaos provides both software products and media servers that deliver an unrivalled performance in speed, effects and manipulation of simultaneous high-definition videostreams.