Dual GLD systems split via Dante were installed at the British Music Embassy, the hub of British Music at SXSW. The set up comprised a GLD-112 with AR84 and AR2412 racks and AB-168 stagebox at FOH, and a GLD-80 expanded with an AR2412 and two AR84s for monitors. A broadcast multi-track feed for the BBC was also taken from the Dante network. The system was complemented with a Tannoy VQ-Live rig powered by Lab.gruppen amplifiers. 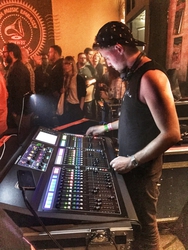 "A mixer’s ease of use, flexibility, and processing capabilities are put to the test during festivals like this, with 15-minute band changeovers, so the ability to drag and drop any channel where it is needed on the GLD surface was invaluable,” says VP of sales for Allen & Heath USA, Michael Palmer. “It's super-easy to program and change scenes for the various setups. Additionally, the onboard effects eliminate the need for any outboard gear, which is always a concern for floor space in these venues."

In addition to the live band performances throughout the week the GLD systems provided a 48-channel digital Dante split to the BBC, which was then captured using Waves Tracks Live. Paul Long BBC engineer took all the mic pre splits from the GLD via Dante to mix down overnight and broadcast on Steve Lamacq’s BBC show.

Meanwhile an iLive system, comprising an iLive-T112 Control Surface with iDR-48 MixRack, was the live stream mixer at the Fader Fort. Sponsored by Converse, the invite only venue hosted performances from artists including Hudson Mohawke, Vince Staples, Migos, Bleachers and Girlpool, and streamed all performances live at 4K for the first time worldwide. The iDR-48 rack was fitted with a M-Waves network card allowing multi-track recording to Waves Tracks.