Country Icon and Multi-Service Production Company Continue Partnership from 2014
After dominating the country music charts with 35 number ones, more than 60 career singles and a dedicated fan base, Alan Jackson has chosen Nashville-based Elite Multimedia Productions (EMP) to handle all lighting, video and LED for his 25th anniversary, “Keepin’ It Country” tour, which is sponsored by Kubota Tractor Corporation.

The tour, which kicked off in early January in Fort Myers, Fla. and continues through the summer, has production needs that vary with the vast amount of different types of venues it plays. Lighting and video play a huge role in the country icon’s production so that audiences feel the camaraderie that is driven home through Jackson’s songs. Account Manager Peter Streiff assisted in compiling lighting gear from Vari*Lite, Martin, Clay Paky and PixelFLEX LED video curtains that are all serviced through EMP, and help to creatively deliver those goals put in place by Nathan Baugh, tour and production manager, and Craig Rutherford, lighting designer.

“Alan is a unique artist in the sense that he wants his music videos played with every song,” Baugh said. “We had to find a unique way of presenting that without appearing like we were doing the same thing over and over.”

2015 marks Rutherford’s second tour with Alan Jackson, and has worked to freshen and breathe new life into the lighting with fellow designer Justin Kitchenman of Fadeup Design. Through bold colors and beamy looks, Rutherford gets the most out of the gear, including Vari*Lite’s VL3000’s and a MA Lighting GrandMA lighting console.

Because of the packaging of both LED and lighting, production for Jackson’s 2015 was able to implement more efficient strategies. 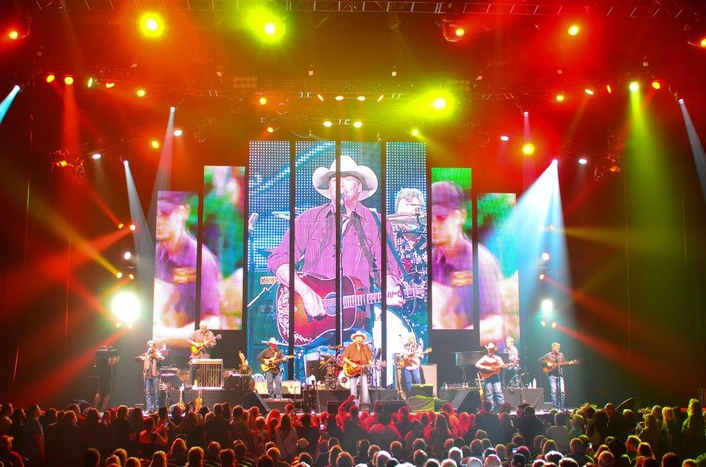 “PixelFLEX was my main reason for coming over in terms of truck space,” Baugh said. “This product has revolutionized our touring in terms of load out times and truck space.”

EMP is a one-stop shop for production services, and has excelled in providing services to popular recording artists including Luke Bryan, Cole Swindell, Darius Rucker and Dream Theatre, as well as for special events across the U.S.

“The most surprising part about working with Elite has been the amount of support I’ve gotten from Peter and Jason, the head of lighting,” Rutherford said. “They’re available anytime something comes up or if I have any kind of problem on the road, and they worked incredibly hard during prep and building to make sure I had everything I needed.”

“Adding Alan Jackson to our Elite family is a special moment for us as a production company,” Streiff said. “It felt right working with Alan and his entire production team, and as a Nashville-based company, it’s a proud moment to be able to continue working with a country icon like Alan Jackson.”

In his 25-year career, Jackson has been steadfast in his love for traditional music while enjoying major chart success. Since signing his record deal in June 1989, he has sold nearly 60 million albums worldwide and ranks as one of the 10 best-selling vocalists of all-time in all genres. He has released more than 60 singles—registering 50 Top Ten hits and 35 #1s (including 26 Billboard #1s). He has earned more than 150 music industry awards—including 18 Academy of Country Music Awards, 16 Country Music Association Awards, a pair of Grammys and ASCAP’s Founders and Golden Note Awards. Jackson received the first-ever ASCAP Heritage Award in 2014 having earned the title of most performed country music songwriter-artist of ASCAP’s first 100 years. He is a member of the Nashville Songwriters Hall of Fame and the Grand Ole Opry.