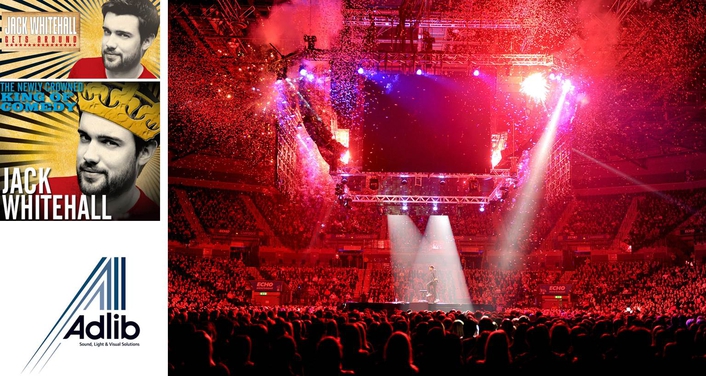 The London Evening Standard even commented, “In terms of production values this may well be the most spectacular arena stand-up show ever.”

This live comedy tour broke new ground as the first in-the-round UK arena tour by a UK solo comedian, the format enabling Whitehall to engage on a far more intimate level with larger audiences than a conventional end-on stage set up would have done.

However with their usual spirit, Adlib rose to the occasion, resulting in a superlative production enjoyed by packed arena audiences every night.

Coda Audio was chosen as the “Most suitable” option for two primary reasons - its light weight meant more boxes could be flown in the centre of the rooms, and the proprietary HF planar wave drivers ensured they could get clarity and detail into every corner of the room.

The venues all varied slightly, but the average set-up featured eight hangs of Coda, each comprising 12 x LA12s and four ViRAY downs per array, all flown on their own individual points.

The Coda speakers were driven by proprietary C10 amps, and Whitehall used an IEM system so the stage was kept completely clear for optimum sightlines. Utilizing IEMs also made for slick and easy communication between audio crew and artist if necessary.

Four Adlib AA1214 speakers driven by Labgruppen PLM 20Ks were positioned discreetly on the floor around the stage, used as fillers for the front rows of seating.

Whitehall’s voice is “Very strong” elucidates Proctor. He uses his own directional DPA headset mic - chosen by Adlib - which “Worked brilliantly” in the arenas, rejecting any reflections and enabling maximum gain-before-feedback.

Adlib also provided a concealed DPA4060 lavalier mic as a spare, which saved him having to wear a second headset. In the event of the main mic going down this would have allowed a smooth and trouble-free transition.

A number of ambient mics were positioned around the stage to capture the reactions of the first few rows of audience, which were fed into Whitehall’s IEMs.

Proctor mixed the show – and  monitors – from one console, a Midas PRO2, picked for its warmth, great sounding preamps and ability to use dynamic processing, with a Soundcraft Vi1 toured as a rock-solid spare.

Both consoles fed into one of Adlib’s standard Lake processing racks – with three LM44s at FOH and three LM26s at amplifier world – giving a total of 36 zones of PA and a high degree of control in all the different rooms in which they played.

Mixing in-the-round produced its own set of challenges, especially for a comedy show, where the clearness and tonality of the spoken word and vocal expressions is absolutely fundamental to the performance … and the public’s enjoyment and understanding of the act.

The infrastructure required for this to work best was a huge technical challenge each day requiring time and utmost accuracy.

In the centre of the room, Adlib’s design included a 13.5 metre eight sided truss, trimmed at 21 metres, which was used to rig the four LED screens from Creative Technology on the long straight sides.  These were a key aesthetic for the show. 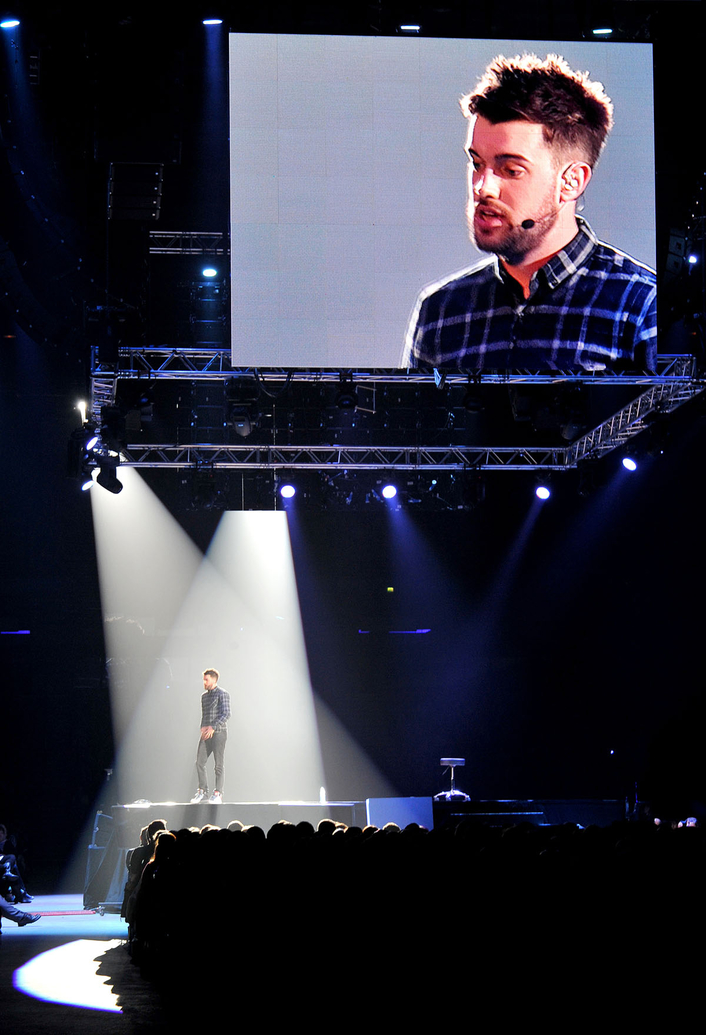 In the middle of this octagonal truss, an 8 metre box truss was flown at 7 metres high which provided some lighting positions plus the hub of a complex cable management system for audio, lighting and video.

These – including approximately 3.5 Km of Socapex cables for audio alone – were then all fed via a straight truss, which could be extended up to 37 metres,  into one corner of the room and dropped down into their respective dimmer and amp worlds.

Lighting
The tour’s lighting was designed by Adlib’s Pete Abraham based on an initial idea from Jack Whitehall’s management company, based on a boxing match style appearance, complete with the video cube above the stage and stark lighting beaming down at a sharp angle.

A ground supported arch was also erected for Jack’s entrance – by Segway -  into the auditorium, and this was rigged with 11 x 2-lite Moles, six Atomic strobes plus another three MAC 700 Washes on the floor each side.

Adlib also supplied four Robert Juliat Ivanhoe 2500W follow spots that were stationed in each corner of the arena on towers provided daily by the venue to Adlib’s spec.

Also part of the Adlib package was an Altair wireless comms system used by the whole crew, the follow-spot ops, stage management and techs from every department including pyros which were supplied by BPM. 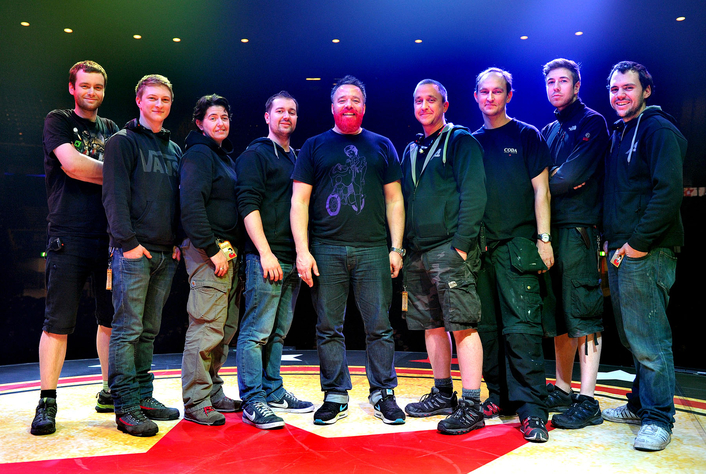 UK Rigging were the tour’s rigging contractors, and supplied all the motors and rigging needed for sound, lighting and video.

Phil Kielty Adlib’s Client Manager stated, “When we all chatted about this over 6 months ago it seemed crazy to do live comedy ‘in-the-round’ but it really worked! Audiences, journalists and reviewers have all raved about Jack’s show and the production. The team behind Jack is incredible, as a comedian he is fearless, and Adlib is very proud to be involved such an evolutionary project. It summed things up perfectly when Alex Hardy said in The Times ‘…. if you are going to do arena comedy this is how to do it: Make it an event ‘**…. Well on this occasion Jack Whitehall did.”