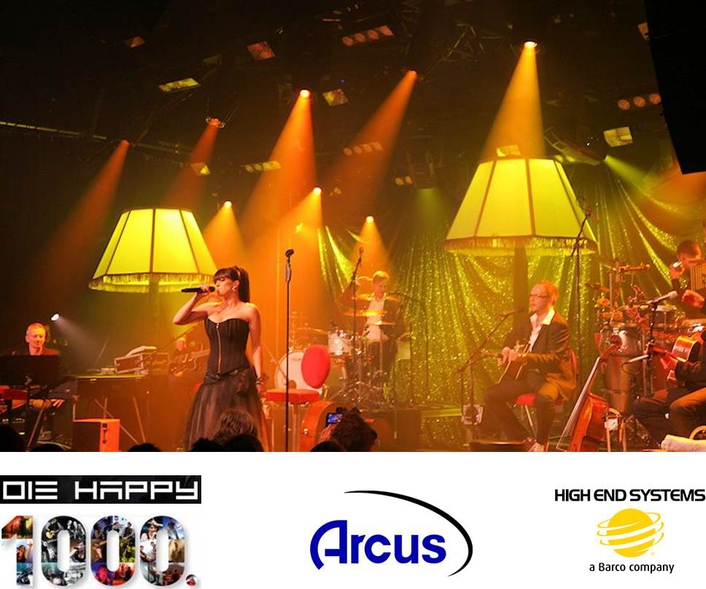 They started in 1993 and have toured all over Europe. They recently celebrated their 1000th concert at the Roxy club in Ulm, where they played their first concert in 1993. They gave two different concerts during to mark the special occasion. First, "Die Happy" started with an acoustic set and then they switched to their full rock set.

LD Rolf Wenzel has worked with "Die Happy" for many years designing many of their concerts and tours.  For the commemorative concert Wenzel specified 24 Technospot automated luminaires, one Road Hog Full Boar, two Wholehog Playback Wings, two DP8000 DMX Processors, one Hog IPC and an Arcus Lighting Hog Switch 8A as the Main/Backup Switch.

The Technospot fixtures were his first choice after having worked with them on a different concert a few weeks prior.  Wenzel explains, "The Technospot is an all-purpose moving light. Especially in this setup it was necessary to have a moving light with multiple features. Narrow beams were as important as the soft-edge. The indigo highlighter was one of my favorite features.”

Wenzel has used Wholehog consoles for many years and considers it a favorite. "Working with the current Wholehog consoles is really easy and I always trust in this system. The Wholehog software is really flexible, and it is very easy to change between a full console and a Hog 3PC system incorporating playback and programming wings.  Often I switch between festivals, touring concerts and small club concerts, where I only need a small Hog 3PC system.”

Arcus technician Tobias Bewermeyer supported Wenzel in installing and programming of the Technospots and the console setup including DP8000 DMX Processor and the Arcus Hog Switch 8A Main/Backup Switch.