“Autokultur” with Sido and Sennheiser 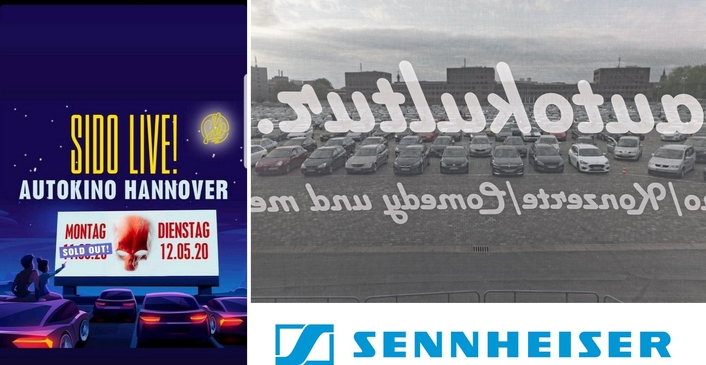 With the slogan “Autokultur – from Hannover for Hannover”, an unusual series of events is helping to keep the entertainment scene in Northern Germany buzzing. Every evening, up to a thousand vehicles converge on Hannover’s Schützenplatz fairground, where they tune in their UHF radios – just like in a drive-in cinema – to listen to exciting stage performances, from concerts to comedy. It’s all a welcome distraction from life during lockdown, and an optimistic ray of light in a time when typical live events have all been cancelled.

Among the highlights of the early summer concert series were two sold-out performances by German rapper Sido. The multitalented artist used a Sennheiser SKM 6000 to wow the crowds on 11 and 12 May 2020. With its stunning bright red, high-gloss finish, the handheld transmitter proved to be a real eye catcher and was the centre of attention during close-ups of the performer on the huge LED walls. 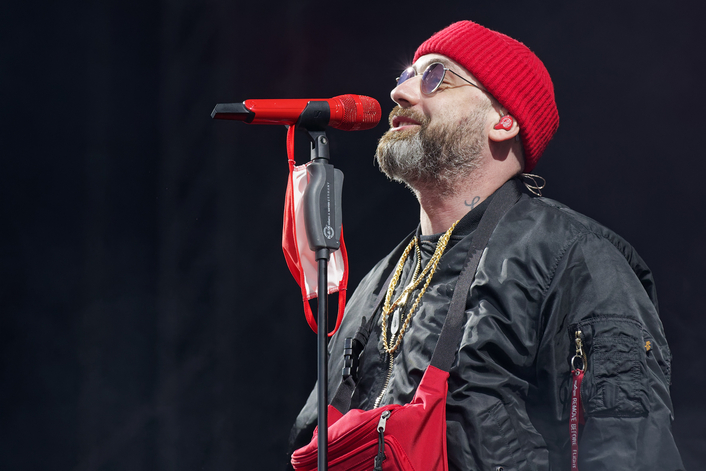 The receiver was a Sennheiser EM 6000, which was placed in a rack bag together with an L 6000 charger at the monitoring console at the side of the stage. A glance at the high-contrast OLED displays showed that monitor engineer Thomas Hofer had reassuringly chosen unambiguous designations (RED/BLACK) for the two reception channels, ruling out any risk of confusion. 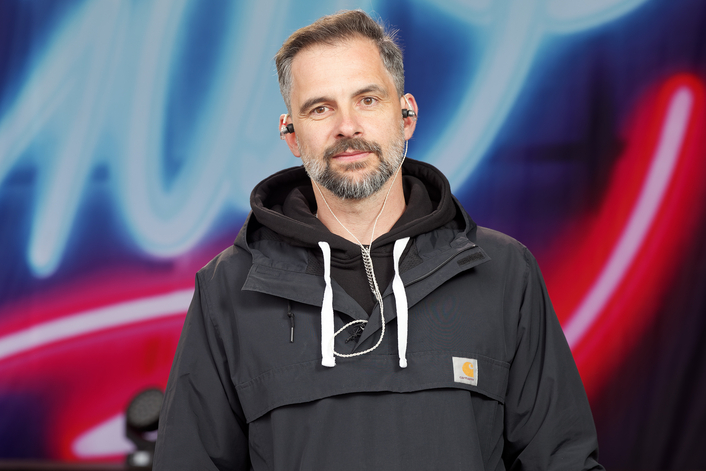 “The SKM 6000 handhelds have never once let us down”, said Thomas Hofer with great satisfaction. “The MD 9235 capsule harmonises perfectly with Sido’s voice, and this combination of transmitter and microphone capsule is robust enough to withstand the most energetic live performances or even showers of rain during open-air concerts without any damage. What is more, the feedback tendency when the performer is moving in critical areas, for example at the front edge of the stage, is extremely low.” 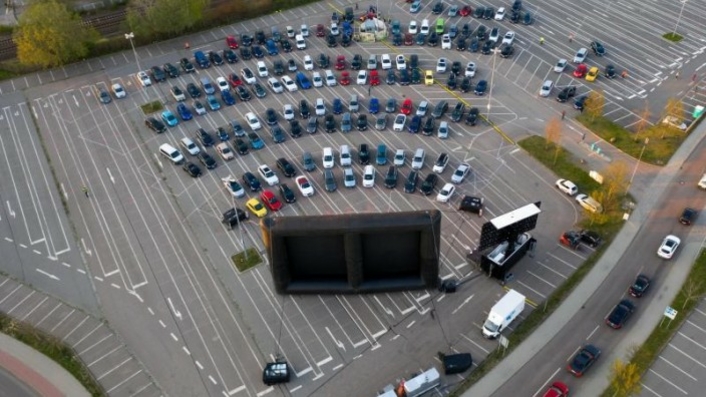 Thomas Hofer is impressed by the sound of the Sennheiser Digital 6000 systems in every respect: “With analogue transmission systems, you sometimes have to struggle with sound influences caused by the companders,” the sound engineer explained. “Digital transmission, on the other hand, doesn’t require traditional companders, which, combined with other features, results in a more open sound image. And when you use a high-quality signal chain you can hear that immediately!” 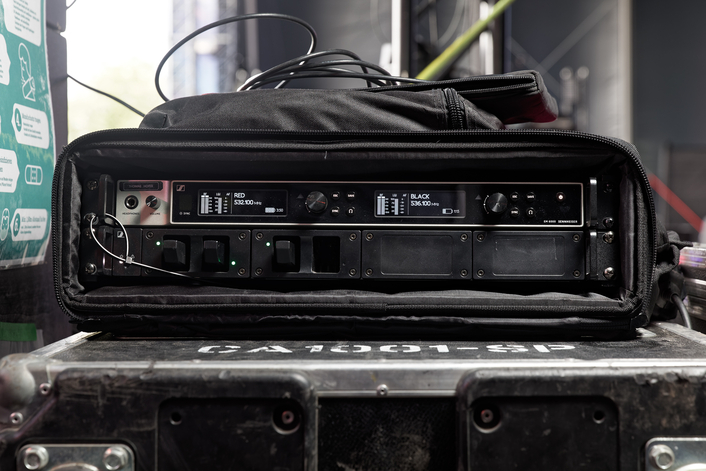 No risk of confusion: a glance at the high-contrast OLED displays shows the unambiguous designations (RED/BLACK) of the two reception channels

On the safe side thanks to future-oriented technology

Thomas Hofer is highly appreciative of the impressive spectral efficiency and the outstanding signal stability of the Sennheiser Digital 6000 series: “The Federal Network Agency is increasingly selling off segments of the frequency spectrum for financial reasons, which means that less and less spectrum is available for events,” the audio expert complained, summarising the development of recent years. “With Sido, we are often involved in large events that use a hundred or even more transmission channels. But thanks to our Digital 6000 systems, we are fortunately on the safe side.”

Normally, setting up multichannel wireless systems requires intermodulation calculation, and sound engineers have to circumvent these intermodulation frequencies when planning their system. The Sennheiser Digital 6000 system, however, does not generate any intermodulation products, which means that frequencies can simply be arranged in an equidistant grid (i.e. at equal distances from each other). Therefore, it not only makes frequency planning very easy, it also makes it possible to accommodate more transmission channels within a defined frequency window compared to systems of other competitors on the market. Thomas Hofer: “With the Digital 6000 systems, I simply put the transmission frequency into a free space, and everything works perfectly – I am totally impressed by the Sennheiser digital wireless systems!”

“Honk if you think I’m a legend!”: Sido, whose real name is Paul Hartmut Würdig, certainly knew how to get the best out of the unconventional situation of a drive-in open-air concert with his usual wit and creativity. The members of the audience watching from around a thousand cars were quick to show their appreciation by flashing their headlights and sounding their horns. Everyday worries were put aside during the two-hour show, and the multitalented rapper provided his fans with two unforgettable evenings, even if the surroundings might have been somewhat unusual.

Thomas Holz, Sennheiser Business Specialist Touring & Rental, explained: “For many years, Sido used a 2000 series system with great success. Since 2019, our innovative Digital 6000 system has been his preferred choice, and I’m really pleased that Germany’s most popular rapper has chosen this ground-breaking Sennheiser wireless solution. At the artist’s request, Sido’s SKM 6000 handheld transmitter was given a stunning bright red finish at the Sennheiser factory in Wedemark, in keeping with the artwork of his latest album.” 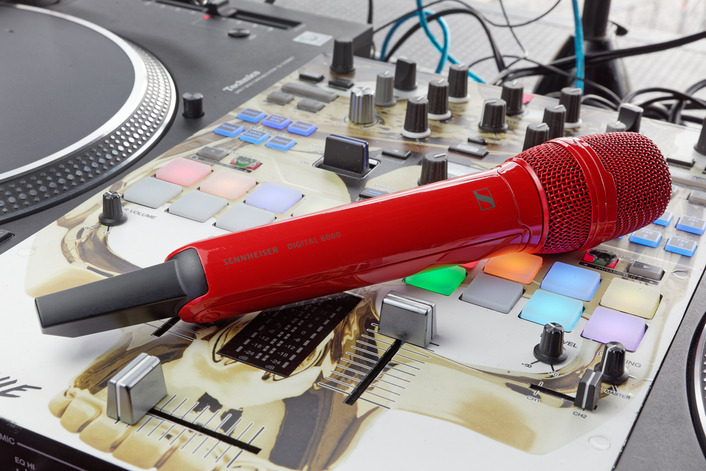 At the artist’s request, Sido’s SKM 6000 handheld transmitter was given a stunning bright red finish at the Sennheiser factory in Wedemark – in keeping with the artwork of his latest album

Even though large events in traditional formats are not allowed to take place in the current situation, fans needn’t go without the thrill of a live show. Under the motto “Autokultur - from Hannover for Hannover” (www.autokultur.info), Hannover Concerts and the agency event it have been presenting a series of events that include not only live concerts but also comedy performances and films since 7 May 2020 with the support of well-known sponsors. The audience can watch the show from the comfort of their car while, of course, still observing all the rules regarding hygiene and social distancing – a relaxed evening in their “mobile living room” is guaranteed. 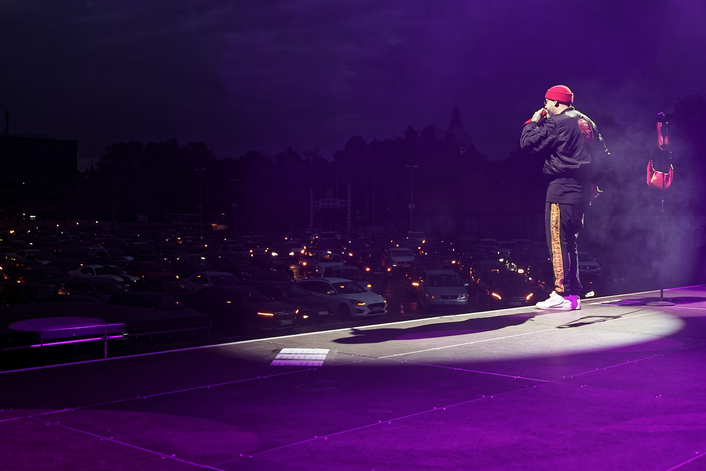