“The only lighting desk that can do it” 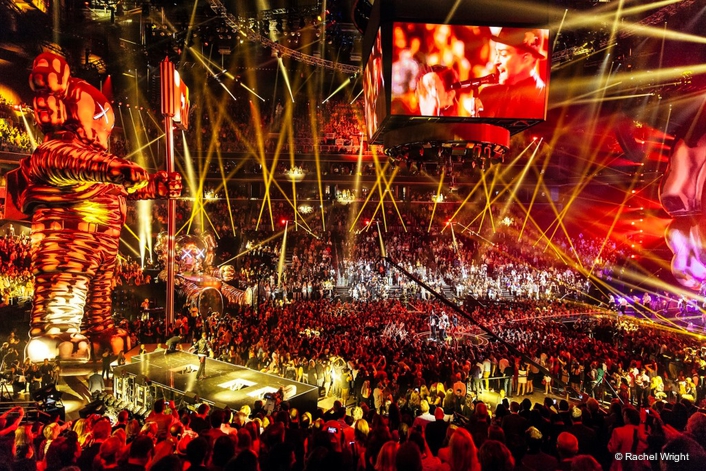 grandMA2 consoles headline at 2013 MTV Video Music Awards
While the 2013 MTV Video Music Awards (VMA) attracted lots of press for its outrageous performances, the show made headlines among professionals for its creative staging, too. The show was controlled by grandMA2 full-size consoles at Barclays Center, Brooklyn where artist and designer KAWS reimagined the VMA’s iconic moonman statuette.

“For the 30th anniversary of the VMAs and its first time in Brooklyn we were celebrating Brooklyn and Brooklyn artist KAWS, who redesigned the moonman as a 60-foot inflatable silver statue that towered over the main stage,” says lighting designer Tom Kenny. “I wanted to make it feel like you were in a gallery or museum honoring his work – it’s an unusual idea for an awards show, but MTV is always on the edge.”

To achieve his goal Kenny deployed a large complement of Clay Paky Sharpy Beam and Sharpy Wash supplied by VER. “I had extremely high trims and needed audience light, back light and aerial beams,” he explains. “They did a great job for me. The whole idea was that the show didn’t look like a normal awards show, yet it needed the performances to be theatrical. Even though the trims were high, the Sharpy were powerful enough to do the job.”

To control the Clay Paky fixtures he used two grandMA2 full-size consoles “with massive amounts of universes” and had two more grandMA2 full-size on hand as backups. “There’s really only one kind of desk for this type of show,” says Kenny. “When the artists are rehearsing we only have a turnaround of a couple of minutes because they’re so busy. The grandMA2 is perfect at making the quick changes. It’s really the only lighting desk that can do it. Everywhere I travel in the world I see grandMA2.”

Kenny notes that the VMA Awards tallied huge ratings and always enjoys worldwide appeal. “Emails from my peers after the show complimented me on how great and iconic the show looked,” he reports. “It really achieved the status of art piece. And we had a great time in Brooklyn, where the crew was fantastic.”

A.C.T Lighting, Inc. is the exclusive distributor of MA Lighting in the US and Canada.