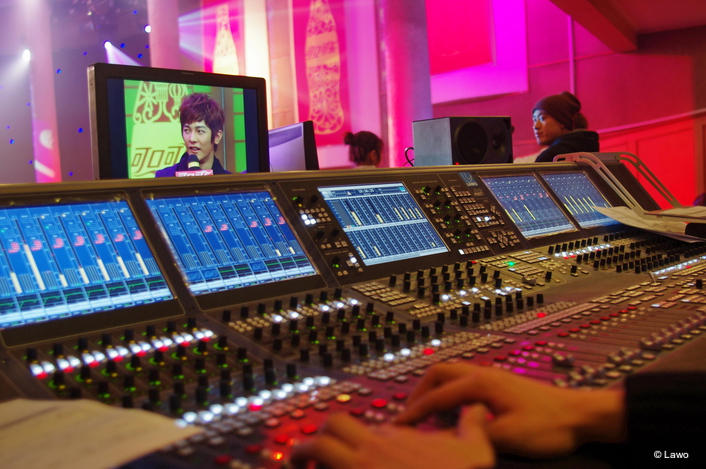 Zhejiang Radio and TV Group Concert Hall acquires HDTV production capability
In Hangzhou, capital of China's Zhejiang province, a popular Concert Hall has been given a new identity after an extensive refurbishment by its owners, the Zhejiang Radio and Television Group. Built in the 1990s as a music hall, the venue has been transformed into a multi-function theatre and television studio with HDTV production capability, thanks to the installation of a Lawo mc²66 digital audio console, the first in East China. 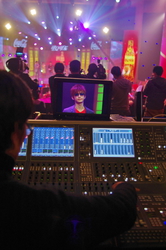 Known for its strength in content production and high-technology utilisation, Zhejiang Radio and Television Group has successfully hosted many large-scale live broadcast productions. However, a shortage of large TV studio facilities has necessitated the conversion of the Group's well-known Zhejiang Concert Hall.

Main contractor New Digital Technology Ltd (NDT) completed a month-long integration project, installing a 40-fader Lawo mc²66 console with 144 DSP channels which will handle both sound reinforcement tasks at front-of-house, as well as the broadcasting output. With the support of an OB van parked outside, the Concert Hall is now able to manage a 10+2 channel HDTV production, and will be used for drama and live music as well as the light entertainment and evening party programme, a must for every TV station on festivals such as Chinese New Year and National Day.

The 24+8+24 frame mc²66 console was chosen for its high reliability and extensive redundancy, and the mxGUI, which insures the programme material during the production. The desk’s ability in the live environment was also persuasive, passing its first test at a fan meeting for Fahrenheit, China’s hottest boy-band, who used the hall for a live recording. Sponsored by Coca-Cola ™, the band played live for 1000 fans and the Lawo console distinguished itself both as a recording console and as a front-of-house desk.

First experience of the Lawo during the Beijing Olympic Games 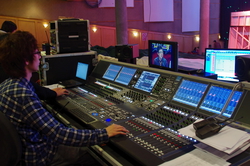 The major pilot project has been a singing competition called ‘I wanna make records.’ Such competitions are extremely popular in China, and more than 30,000 people entered this one. With eight of the best music producers in China acting as judges and compere, the show achieved outstanding audience ratings.

Throughout the production, the mc²66 was located in the stalls among the seats, with a stagebox with 48 inputs placed near the stage to handle 10 wireless mics, 3 judges’ mics and 2 ambient mics, as well as the band.

The Zhejiang Hall’s audio director is Mr Lai Li, who had his first experience of the Lawo during the Beijing Olympic Games, where he was heavily involved with the broadcasting, seeing mc²66 consoles at work on badminton and baseball. He has high praise for its easy flexible operation, and clear transparent sonic performance. Fellow engineers at Zhejiang TV are also pleased with the first results from the console in the concert hall: they are satisfied with the stability of the mc²66, and are convinced that their work will be made easier in the future.

Mr Bai Shi, Lawo’s representative in China, underlines the significance of Zhejiang TV’s choice of an mc series, the first to be installed in East China. “This part of China is the most developed, with the biggest cities of Shanghai, Nanjing, Hangzhou and Suzhou, so this is a very important reference project for Lawo which we hope will influence the big broadcast projects in the region.”