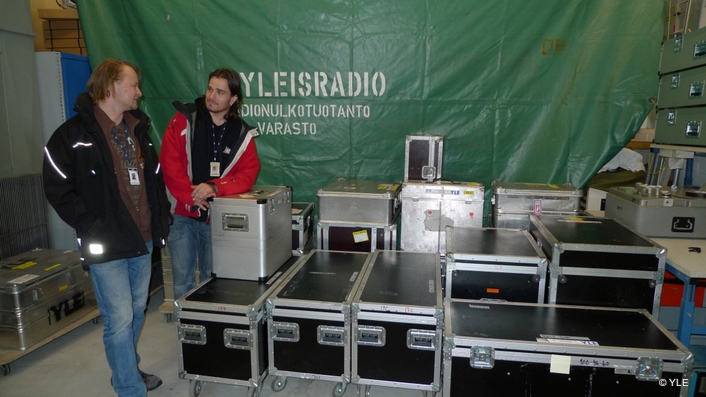 YLE on the Way to Vancouver
Finland’s premier broadcaster Finnish Broadcasting Company (YLE) has devised a clever solution to the problem of escalating travel and accommodation costs for the 2010 Winter Games. Using Lawo’s integrated technologies, YLE has devised an original production network for the collection and distribution of reportage for the Finish audience that requires fewer personnel on site in Vancouver, yet does not compromise either quality or creativity.

In a joint venture with SVT, Sweden’s national broadcaster, YLE’s main production concept is to gather every commentary and intercom signal in Vancouver and Whistler and route them to Helsinki, where they will be distributed to YLE production units for mixing. Close collaboration between YLE, Lawo’s hardware engineers and DSA Volgmann, Lawo’s R&D partner, has delivered a system for real-time audio routing and simultaneous scheduling, remote control and monitoring of all matrices which will work across half the world. Matti Helkamaa, Senior Technical Advisor for YLE, explains. “For budget reasons, we decided to send only the commentators and reporters, and a small technical core, to the actual Olympics site. Instead, we are using our own Studio 25 in Helsinki, which is equipped with a Lawo Nova73 HD Matrix and mc²66 digital console, as the main production unit for our broadcasting. For HD production, we will use the resources in our HD-1 OB.”

From Vancouver and Whistler to Helsinki and back

“Commentary and intercom signals will be gathered in two location facilities in Whistler and Vancouver, equipped with Lawo zirkon and crystal consoles and Nova 73HD Matrices, and supplemented by SVT’s two Lawo mc²66 digital desks. From there, signals will be scheduled with DSA Line Scheduler systems and routed to and from Helsinki via EBU’s FINE Network’s Nimbra AES Service. In Whistler, Vancouver and Helsinki, commentary audios in two languages will be inserted in the Nova 73 HD’s cards to the correct SDI signal’s audio channel for EVS Farm, which operates on an SDI basis only. The return audios from the production units will be collected to Nova Matrix in Helsinki and distributed via two matrices in Canada to venue.”

In such a complex signal gathering set-up, and to ensure no compromise on quality or flexibility, all elements have to be totally reliable. With an increased risk of bottlenecks because of capacity and the time zone difference, very precise routing is required. Lawo’s proven Nova73 HD and DALLIS systems were the obvious choices for YLE, a committed user of Lawo technology, and the use of Lawo mc²66 consoles at SVT adds to the integration of all the technical elements. The Nova73 HD has capacity of 8000 x 8000 cross points but is here configured for 1024 inputs and 1024 outputs. All the systems have considerable built-in redundancy.

The Installations in Vancouver, Whistler and Helsinki

YLE’s criterion is for production qualities to be the same as if everyone were actually stationed at the Winter Olympics venues. For each of the three operational venues, the systems will be comprised as follows:

Originally the transfers Whistler-Vancouver and Vancouver-Helsinki were going to be over an IP but this is now mainly for backup and intercom services. Instead, PGM audios will be transferred between the venues via EBU’s Fine/Nimbra network in AES format. YLE’s Helkamaa commented, “One of the tasks I feel is only possible with Lawo equipment is the extensive real-time routing and scheduling of the audio signals, so that, whilst the switching will take place remotely in Canada, the main mixing will be done in two units in Finland. The production will be transmitted on two TV channels and there will be an HD program as well.”

Success for YLE and SVT in Canada will persuade other broadcasters 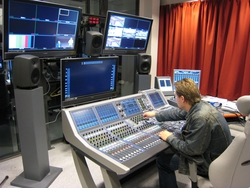 This production model should certainly appeal to broadcasters and producers who are feeling the financial pinch of sending full technical teams all over the globe to gather and produce high-end programming. The unique integration of Lawo technologies is key to keeping on-site budgets down whilst sustaining YLE’s ability to deliver quality output for their broadcasts. In the past, many TV companies would have baulked at the idea of remote gathering the content of their programmes. However, the ease of operation and programming, along with the speed and reliability, made possible by a chain of Lawo products now makes this a professional reality. Success for YLE and SVT in Canada will persuade other broadcasters to send only essential on-site crew to the host country, releasing the budgets to upgrade studio equipment at home. With the Winter Olympics just 2 months away, Helkamaa summed up, “The network testing has just been successfully completed at DSA Volgmann in Cologne, simulating the WAN and the MTX remote control. We are already fully convinced that this dispersed model will work beautifully and set a benchmark for those broadcast companies that wish to reduce their on-site production costs.”