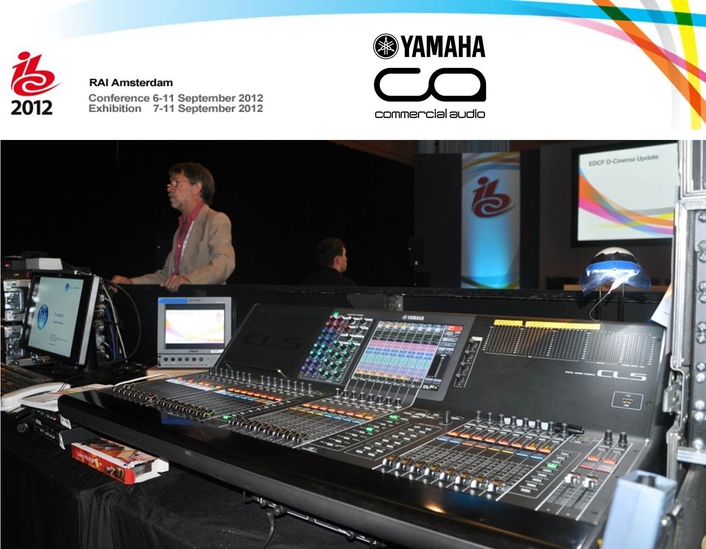 .
As a ‘must attend’ event for the movers and shakers of the world’s broadcast industry, Amsterdam’s International Broadcast Convention (IBC) has to provide the very best facilities. Key amongst these are high quality audio systems, to ensure that the many conference sessions come across clearly. With Yamaha CL series mixers and the company’s latest loudspeakers dominating this year’s event, not a single nuance was lost.

Taking place at the city’s RAI convention centre, IBC2012 attracted over 50,000 visitors from 160 countries and delegates at many of the seminars were able to experience the cutting-edge technology of Yamaha CL series consoles and DXR/DXS series loudspeakers.

The audio technical infrastructure of the seminars is handled by Terry Nelson and Sean O’Dea. The Forum, IBC’s biggest space (after the Big Screen Auditorium), hosted a wide range of presentations and was where the convention’s keynote speech was delivered by high profile artist will.i.am. Here a Yamaha CL3 digital mixing console and RIO1608-D rackmount i/o unit were installed. Terry also put in an ambient surround system, which comprised six Yamaha IF2108, two IF3115/95, two IF2115M/64 and two IS1215 subs.

In Room G102, where high profile broadcast industry leaders were running workshops, a CL1 console with RIO1608-D, while the D-Cinema Auditorium featured two further DXR12s as active stage monitors for the conference presentations.

“We used the DXR12s in there as it monitoring been difficult in the past. I thought I’d go the extra mile and add two active stage monitors, which turned out to be a great decision,” says Terry.

“A very handy thing about the CL series - as with all Yamaha digital consoles - is that they can use the mini-YGDAI cards to satisfy the many interface requirements at IBC,” says Terry. “The guys were handling feeds of all kinds and from all sorts of directions, so the fact that we could configure the consoles very easily to meet these requirements was a big plus. In addition the systems were really easy to set up and tune.”

He continues, “Yamaha really pulled out the stops to supply extra equipment for the various rooms. Engineer Arthur Koll had installed all the latest firmware and he came round before the sessions started to answer any questions, to share some tips and tricks and make sure that the operators were all happy. The support was second to none and the equipment all performed flawlessly.”