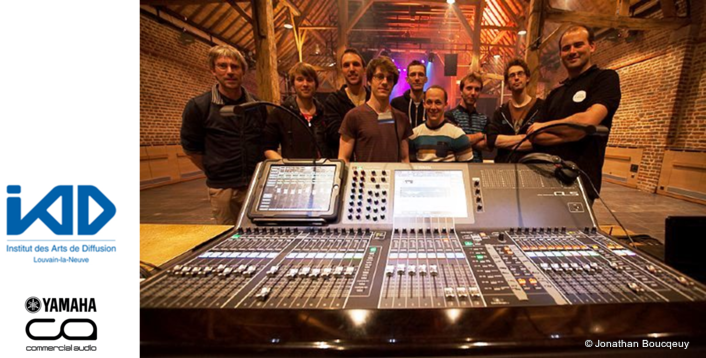 .
As well as live music, theatre, sport and broadcast, Yamaha’s CL series digital consoles are increasingly being specified by colleges teaching state-of-the-art sound mixing and networking. One example is Belgium’s Institut des Arts de Diffusion (IAD), where a CL5 is a vital part of its live production courses.

IAD is located in the planned town of Louvain-la-Neuve which, since 1969, has risen from farmland to having a permanent population of over 30,000, plus many more students during term time. Originally developed to house the Université Catholique de Louvain - with which IAD has a close relationship - the city is now host to a number of education facilities, as well as a science park, exhibition centre, live venue, museums and other amenities.

With its focus on theatre, live music, cinema, television, radio and multimedia, IAD has to ensure its students are trained on the very latest equipment. In charge of teaching professional audio is studio and live sound engineer Jean Luc Ongena. Together with fellow lecturer François Hubaux, another experienced live sound engineer who also works for audio visual specialists Sebuco, they were instrumental in IAD’s recent purchase of a CL5 console and Rio3224-D i/o unit, supplied by Wavre-based Arto s.r.

“The course focuses on all aspects of live audio production, including setting up and calibrating PA systems, front of house and monitor mixing, live recording and stage management,” says François. “Sound technicians need to know about networking, so using a Yamaha CL5 and Dante networking is the best way to give students practical experience of the most up-to-date system. The CL system allows us to easily explain and teach students about it.”

The course ends with the staging of a series of concerts. At each one, students will be front of house engineer, monitor engineer, PA technician and so on, so by the end of the series they have hands-on experience of each role. “These are real shows, they take place in a public venue with a paying audience and the production technology, performances and timings are all exactly as they are at any live show,” says François.

“The CL5 is really helping students to be as well-equipped as possible to work as professional sound engineers. We are really happy to be able to use such a powerful and intuitive tool in education.”