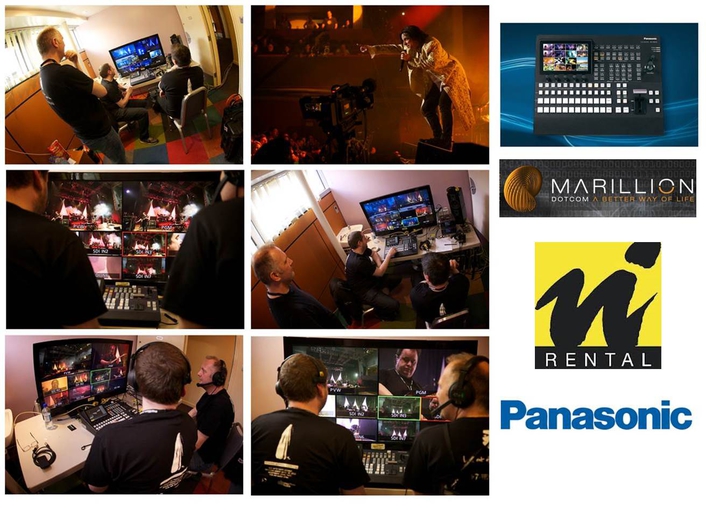 On Friday 12th April at the Civic Hall in Wolverhampton, the English rock band Marillion made history at their biennial fan convention, the UK ‘Marillion Weekend’, by setting the world record for the “World's Fastest DVD Release".  A five-disc souvenir set entitled ‘Clocks Already Ticking’ was on sale just 10 hours and 31 minutes after filming the Radiation show on the convention’s opening night, beating the previous record of 12 hours and 24 minutes.

VI Rental worked in conjunction with multi-camera production specialists Toward Infinity and Abbey Road Studio's Live Here Now instant recording and distribution service to have the set on sale at 7.03am the following morning. The intense challenge to produce and turnaround a five-disk souvenir set in world record time required intuitive equipment packed with useful functions to allow the workflow to be as efficient as possible. The Panasonic AV-HS410 was identified by Steve Gould, Technical Supervisor at VI Rental as a “perfect solution” after testing it at a Visual Impact open day.

When filming the Radiation show, 7 camera sources were connected to the AV-HS410’s SDI inputs, which left expansion in the system for any last minute changes. The enhanced MultiViewer function was set up on the DVI output and connected to a 42” LCD display which enabled everyone to gather around and increase the efficiency of live relay operation. The other outputs were supplied to the Abbey Road crew who were mixing the sound and lighting, and two outputs were connected to the program record VTRS.

“I instantly found the HS410 easy to use. I have only scratched the surface of what the HS410 has to offer, but I can say that it is packed full of functions and features. It's a simple and compact mixer with a built-in 7” LCD screen which I found really useful for navigating menus etc”
“I can not sing the HS410’s praises enough!” added Gould.