World premier for the innovative and specialized camera system „SpeedWinch“ at the Eurovision Song Contest in Baku
Almost noiselessly the fully stabilized Nettmann StabC Compact head with camera speeds down from the ceiling of the Crystal Hall in Baku. Held by two ropes running through a winch, being powered by a 7.000 watt motor, the camera system reaches top speeds of approximately 6 m/s. Despite this amazing acceleration the pictures remain completely smooth and stable at a total distance of 15 meters, due to the 5-axis-stabilized remote head.

“SpeedWinch” is the name of a brand-new specialized camera system invented by skillful engineers working for the German company RTS Rail&Tracking Systems in Winnweiler, Rheinland-Pfalz. There was a period of only four months from the decision to provide the product to the final completion. Record time!

Pizza after midnight
The actual idea already existed a certain time: „After the last ESC in Duesseldorf in 2011 we noticed that there was a strong demand for a high speed winch system for vertical  tracks climbing down from the ceiling. On a long night in January with endless discussions, calculations and lots of pizza after midnight we came to the decision: yes, we can!“, describes  Daniel Pfleger, CEO RTS, retrospectively.

But it shouldn’t be only one SpeedWinch, two systems were required by the client for the Eurovision Song Contest in Azerbaijan. The completion was in due-process: after the final test run and acceptance the systems were just about to be prepared for shipping, when the truck of the forwarding agent reached the warehouse for pickup. Great advantage regarding shipment: the complete SpeedWinch unit fits into a box as big as a standard.euro-pallet. Once arrived in the Crystal Hall, the set-up of the SpeedWinches took only three hours. And they really caused a stir attracting and a great deal of attention by anyone spotting the novelty. 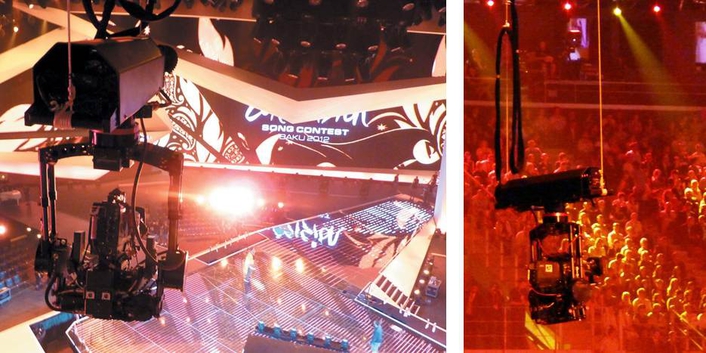 The rts SpeedWinch installed at the Crystal Hall in Baku

Pictures the world hasn’t ever seen before
„Latest camera technology and pictures the world hasn’t ever seen before“, this is how Joerg Grabosch, CEO Brainpool, announced the mega event in advance. SpeedWinch could make a good contribution to this sensational show conception and execution. As a matter of fact, the system is approved and accepted according to BGV C1, so it is licensed to operate above audiences. The rigid synthetic fiber rope warrants a multiple safety regarding the payload of about100 kg (StabC and camera). The data communication is cable-based, a high tech nearly noiseless winch makes SpeedWinch an ideal partner for concerts! 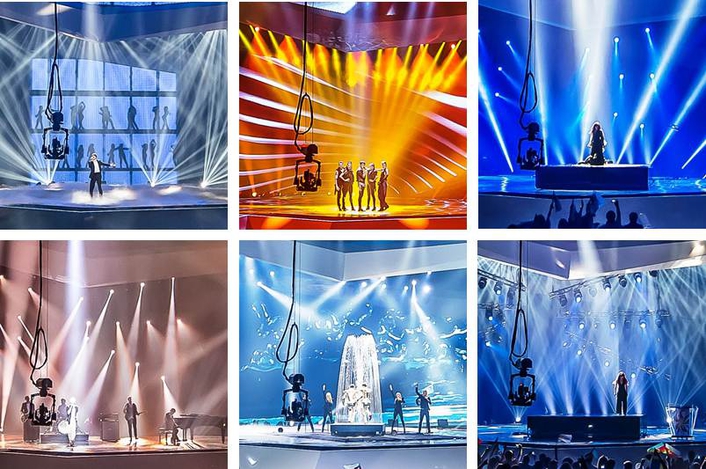 SpeedWinch at the Final of the ESC 2012

Beside two SpeedWinch systems, RTS also provided a dolly with two Suptertower6 mounted on top, running on 70 meters Trackrunner rails. With this application, two different points of view could be realized with only one movement, as one camera focused on the interpreter while the other caught the enthusiasm of the audience. Finally RTS supplied a special Liftarm, just developed the other year, delivering emotional impressions close to the center stage. In 2008 RTS was awarded at the CINEC in Munich for the Trackrunner ENT, a versatile rail tracking system, being used for international events like the Olympic Games, Athletics WC or the Academy Awards in Los Angeles.

At the Eurovision Song Contest in Baku, the „SpeedWinch“ demonstrated only one out of plenty possible applications.

Distinguished technology and unimaginable options
“Accuracy and perfection is our first command at any time, no matter if developing new solutions or on a production“, describes Pfleger the continuous process of advancements “When time allows, we will also enhance the features of SpeedWinch. For example, I see unimaginable options for film: just imagine a truss rig overhanging the top of a high-rise building The SpeedWinch could fall down vertically from this construction, closely running down the face of the building. Wouldn’t that be a spectacular point of view?“