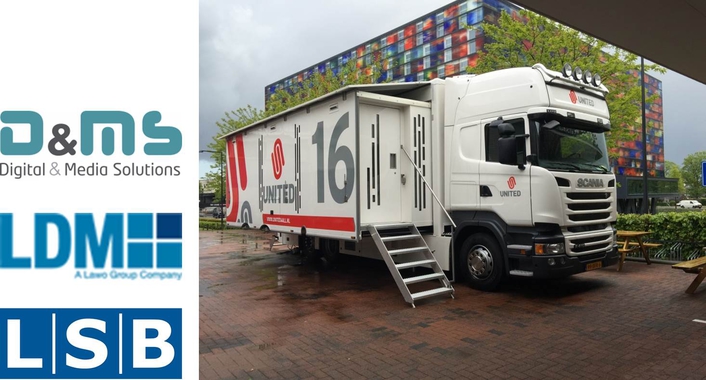 For OB 16, the newest addition to its fleet, the company chose L-S-Bs VSM system to control all major components of the vehicle. L-S-B’s local partner LDM Audiovisual Systems, based in Lint/Belgium, carried out the delivery and configuration of the VSM system. VSM works as overall control instance for central automation of all systems in the vehicle, integrating the video (Grass Valley), audio (Lawo) and intercom (Riedel) router, and also the multiviewer (Grass Valley), thus offering workflows, individually configured to the needs of the company and the operators alike.

The OB Van works completely in HD-quality and all connections are realized with fibre cabling. On the audio part a Lawo mc256 console plus a Nova73 compact core is in place. The audio mixing console works as a controller for the Nova router, which is equipped with MADI, allowing transferring audio signals of 64 audio channels over one fibre cable. Furthermore, VSM has direct access to the Riedel Artist Matrix intercom system that connects to the Lawo system via MADI protocol.

The fifteen different workplaces use VSM hardware panels for switching the signals or even trigger multiple complex functions with one button push. The operators at the fifteen different workplaces can select their specific visualization. The buttons on the VSM panels are LCDs, dynamically displaying the signal labels. Using VSM setups can be set, saved and recalled for any situation. Operators can configure their workflows individually, even during preparations. With global snapshots these workflows can be recalled for production immediately. For example, changing the order of the cameras previously required a lot of effort by changing setup and re-configuration plus re-naming of tally signals. With the use of VSM now that can be programmed centrally – changing all labelling of signals for UMDs, monitors or CCUs – which makes the workstations very flexible. Even LDM could, if desired, control the system from any location by remote. 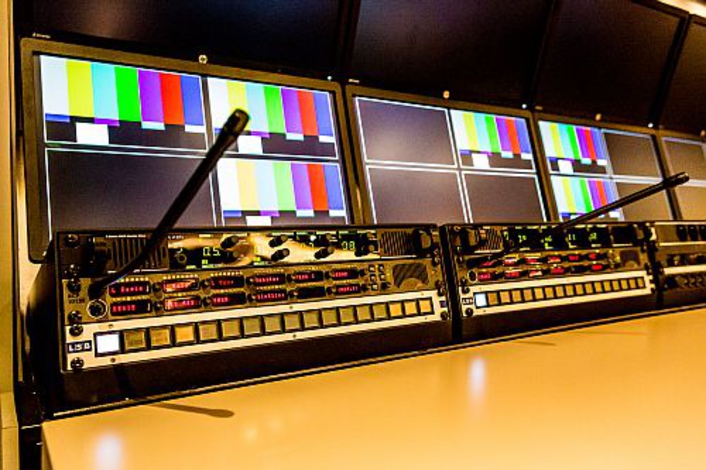 The OB’s entire digital infrastructure and the use of VSM as the overall control system provides a high degree of flexibility never attained before. VSM’s overall design as a hardware independent and IP-based control system as well as its flexibility when it comes to workflow management enables the team to stay ahead of the competition in the demanding field of live production with its short delivery times and ever changing setups.

United offers full service broadcast facilities and ranks among the top three broadcast service companies in the Netherlands. The company owns several OB Vans, from small cars to the largest satellite Outside Broadcast Van (OBV), where thirty cameras can be connected. The camera department produces major sporting events like the Olympics, European Championships and World Cups, game shows, pop concerts and other live events to be mastered by multicam.

Systems Integration was carried out by Digital & Media Solution.

United
United, which is housed in the Music Pavilion / Media Park in Hilversum, is a full service organisation in the field of facilities, and technical and creative support for media and broadcast organisations. United offers a wide range of facilities and services. The company is part of the Euro Media Group (EMG). This allows combining forces with other subsidiaries, exchange knowledge and experience, and operate flexibly and effectively at a national and international level. In addition, this gives customers access to a very wide range of possible facilities, services and solutions.

LDM Audiovisual Systems
LDM Audiovisual Systems is a young and dynamic company aiming to be the local single point of contact for L-S-B, Lawo and DirectOut Technologies. With its office based in Lint, near Antwerp in Belgium, the company has found a central location from which the LDM team provides commercial solutions and technical services for professional audio and video equipment for the Belgian, Dutch and Luxembourg market.

L-S-B Broadcast Technologies GmbH, Wiesbaden (Germany), is the leading manufacturer of control systems for radio and television production. The company’s core product is the IP-based Virtual Studio Manager (VSM), a universal control system. As a single-source solution, VSM works independently of any single manufacturer and thus represents a flexible and powerful answer to technical challenges in the fields of production and broadcasting. Founded in 2003, L-S-B Broadcast Technologies can draw on an excellent worldwide sales network. A staff of 35 at Head Office in Wiesbaden is responsible for management, project implementation, services and software and hardware development.

UNITED OB15
Dutch broadcast provider ... new OB with Lawo Systems
The Closest You Can Get To Real Life Now Is Live