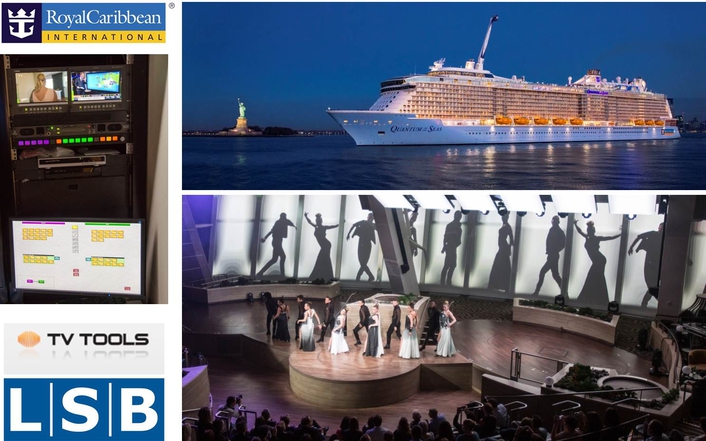 Quantum of the Seas is off to the sea with VSM control system on board
This November cruise ship Quantum of the Seas, the world’s third biggest cruise ship, set off on its maiden voyage to the Caribbean. The vessel sets standards not just in terms of its size, but also in terms of the range of entertainment and technology it offers. Used as Broadcast Control- and Monitoringsystem shipping company Royal Caribbean International chose VSM by L-S-B Broadcast Technologies. Indeed, with numerous event venues and 36 IPTV channels on board Quantum of the Seas provides a programme of activities that is unique.

And furthermore for the first time on a cruise ship all video-content is produced and distributed in HD-quality. For production, coordination and dissemination of all broadcast content throughout the ship VSM is an integral part of the broadcast infrastructure. During construction Finnish company TV Tools served as responsible system integrator for all broadcast technology on board.

Quantum of the Seas offers a large number of leisure facilities: iFly by RipCord a sky diving simulation, Flowrider a surf simulator , rock climbing, bumper cars and the obligatory pool deck. As for theatre, shows, music or musicals guests can choose between four stages, theatres or multipurpose rooms. 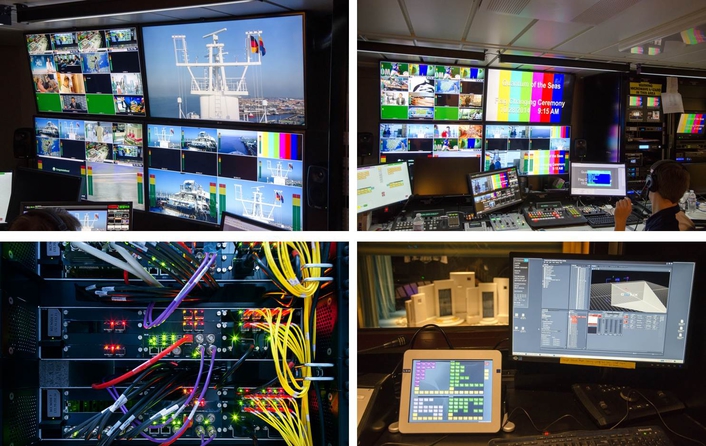 A top attraction is Two70, a multifunctional location at the stern of the ship. During the day the room acts as a lounge area with a large window front providing a 270° panoramic view. In the evening Two70 becomes an event venue with stage shows and the window front is transformed into a screen with 15 4K Christie and Barco projectors screen high resolution pictures on the 50 metre wide and 15 metre high surface. Two70 also incorporates six 100 inch 4K monitors that are driven by robotic arms. At certain points in the programme these screens are included in the choreography. Other event venues are the Music Hall, the Royal Theatre (the ship’s musical theatre with around 1,100 seats, showing the broadway production Mamma Mia) or SeaPlex, which can be used for bumper-cars, basketball or roller skating. At the heart of the on board media and broadcast technology is the Broadcast Control Centre. This is where the incoming and outgoing signals are controlled, switched and processed. VSM is the overall control system in the broadcast control centre. Signals stemming from 20 satellite receivers, from the event locations or self-produced footage are collected. Further control rooms are in use in the various event locations, also controlled locally by VSM. 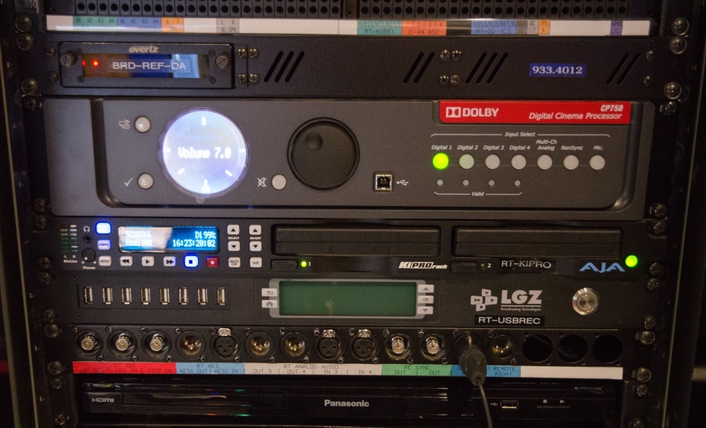 Within the Broadcast Control Centre VSM controls al critical equipment including the Riedel MediorNet hardware, video routers (Evertz Xenon 128x128), Multiviewer (Evertz VIP-X), Evertzs signal processing equipment as well as further tools such as AJA KiPro HD-recorders. VSM takes care of crosspoint routing, Tally, tielines, audio-follow-video or Labelling. At the Broadcast Control Centre audio signals are being routed additionally through a Lawo crystal console, for which VSM has direct access to all parameters, snapshots, as well as signal routing onto the faders. Further on VSM controls several projectors and approx. 26 screens on the ship as well as projector and screen lifts. 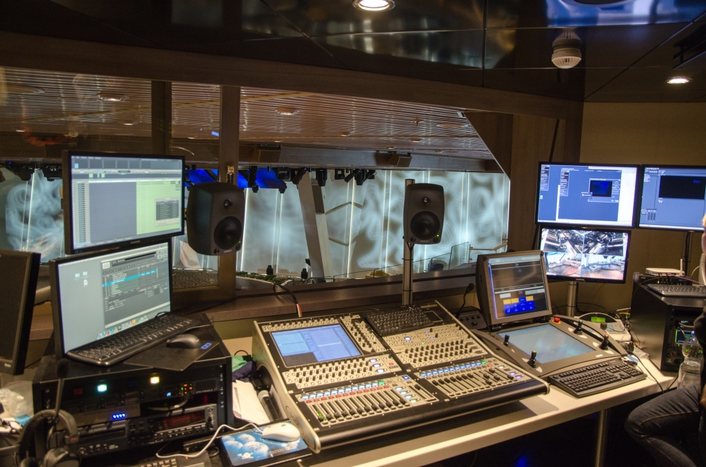 Content transmission via transcoders to the 36 on-board IPTV-channels is also managed in the Broadcast Control Centre. 10 to 15 of these 36 channels are reserved to self-produced content. All audio-, video and intercom signals are being distributed on the ship via a Riedel MediorNet network with 30 nodes – currently the biggest fixed MediorNet installation worldwide. 21 video boxes are available throughout the whole ship to directly plug video and audio-equipment into the MediorNet. 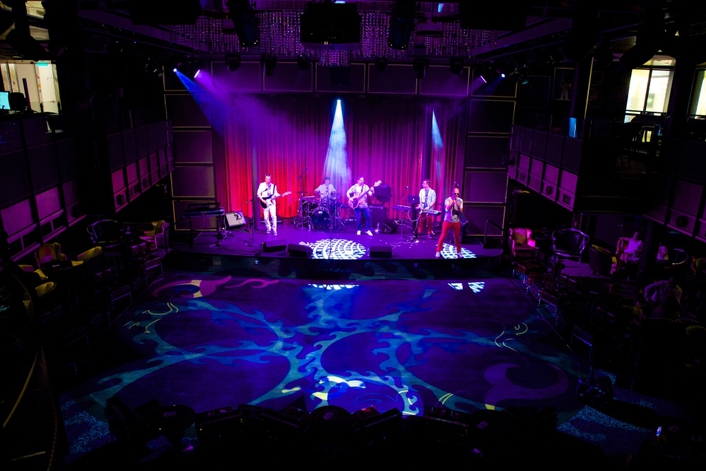 The VSM-system employed on the Quantum of the Seas runs on a server cluster ensuring the highest failure safety. By using L-S-B’s Ember+ protocol – available as open source code – a deeper integration with existing hardware is achieved. Via Ember+ VSM talks directly to coolux’s Pandoras Box and AJA’s KiPro HD-recorders. Control within the Broadcast Control Room is managed via several software-based VSM touch surfaces. In the local control rooms being used for every event location VSM is at place on a TTP10 panel. A compact, all in one vsmPanel client running on a 10,4" touchscreen panel in desktop format that offers the full flexibility of vsmPanel with no need for any additional external PC workstation. 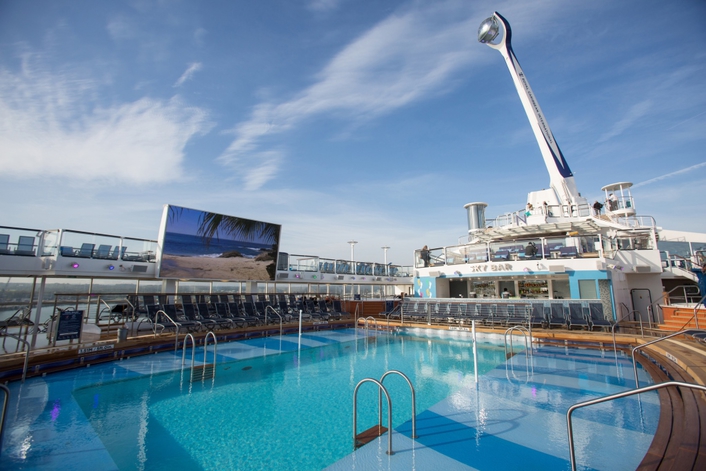 VSM’s reliability and flexibility in connection with all kinds of different hardware in use enables the customer to focus on their core business on board: to develop and deliver extraordinary content and experience for and to the passengers. By commissioning Quantum of the Seas shipping company Royal Caribbean sets new standards in every respect thus putting high requirements on the broadcast infrastructure in use. With the use of VSM as the overall control system the customer is able to control the complex system on-board with relatively little hardware used. Additionally VSM is a future-proof investment and ready for all further changes in terms of hardware, workflow or design.

Commissioning the Quantum of the Seas for Royal Caribbean marks the start of a new class of ships. Two more ships of the Quantum-class are currently being built at Meyer shipyard in Germany. VSM will be the overall broadcast control system within these two new ships as well.