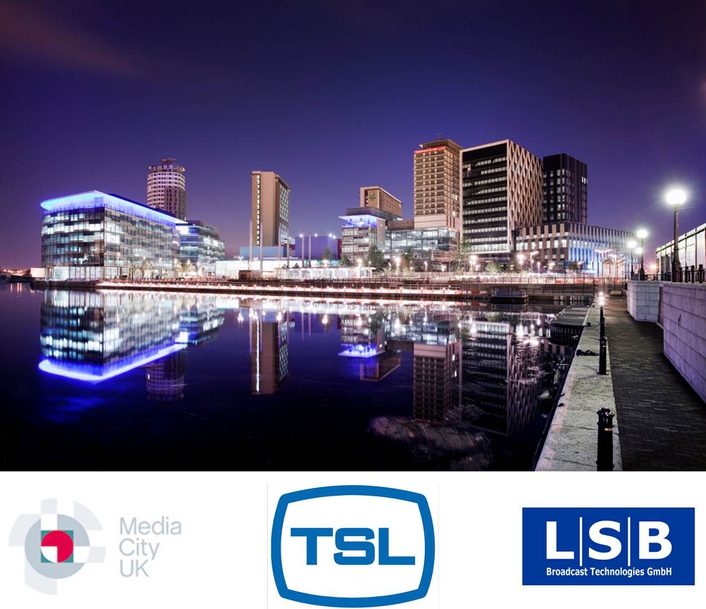 System Integrator TSL Places Large Order with L-S-B
TSL Television Systems Limited decided in favour of the VSM control system manufactured by L-S-B Broadcast Technologies GmbH for the large-scale project MediaCityUK. The British company has been commissioned by Peel Media with the conception of the technical equipment and the system integration of the extensive studio complex in Manchester. From the mid-May five departments of the BBC are to move to the new £650 million site and start producing content. The Virtual Studio Manager (VSM) integrates the major components in the designated studios such as vision mixers, multiviewers, intercom systems as well as control-, audio- and video routers. In addition the VSM provides interfaces connecting the umbrella control system seamlessly with the TSL UMD and tally system.

MediaCityUK is a large-scale project developed and funded by the Peel Group and is the new home and production site for BBC, ITV, Coronation Street, SIS and the University of Salford. A modern media city arises on the banks of Manchester's historic ship canal on a total of 37 acres (potential to develop up to 200), housing one of Europe's biggest HD studio complexes. From mid-May the BBC will start their relocation of five departments including BBC Children’s, BBC Children’s Learning, parts of BBC Future Media & Technology, BBC Radio Five Live and BBC Sport and Breakfast TV to the new location Salford. As well as the studio block 400 apartments, a wide range of office space, a hotel and a tram stop in the heart of a five acre piazza have been delivered.

The system house TSL, headquartered in Maidenhead, lead the definition for the technical development of the studios, the technical block and master control room since autumn 2008. Technically the new media community leads the way: TSL realised a 3-gig infrastructure allowing both 1080p50 and 3D operation. With the aid of the VSM control system the equipment in the complex is networked in such a way as to enable easy re-assignment of all facilities such as studio wallboxes and galleries.

Seamless Integration of all Production Components

L-S-B equips a total of three studios and the master control room with the Virtual Studio Manager. The VSM provides interfaces to the Sony vision mixers (MVS 8000 and MVS 6000), KaleidoX multiviewers and numerous under monitor displays in the studios HQ3, HQ2 and HQ5. In addition the overall system controls the TSL TallyMan, RS422 and video routers by Snell, modular Axon equipment, several Riedel talkback systems, audio routers from Calrec and Harris X85 processors. This enables the central monitoring and management of the HD studio production centre of the MediaCityUK at individually configurable user interfaces.

L-S-B Broadcast Technologies GmbH is the global leader in advanced mobile audio and video broadcast controls. The core product of the company, which is based in Bingen in Germany, is the Virtual Studio Manager (VSM), an IP-based overall control system. Since the VSM is able to control broadcast devices from any manufacturer, it provides a flexible and powerful one-stop solution that meets all broadcasting requirements. Together with the configuration software vsmStudio, the VSM makes a variety of hardware and software front-ends available for an unlimited number of users. This enables complete studios, master control rooms and mobile trucks to be equipped and managed with one single system. Customers of L-S-B include the NDR, proSieben Sat. 1, Deutsche Telekom, T-Systems, N24, n-tv, and numerous other radio and TV stations all over the world. Founded in 2003, the mid-sized company has access to an ideally positioned global sales network. A staff of 20 people responsible for management, implementing projects, service, training, software and hardware development and production are employed at the company’s headquarters in Bingen in the German state of Rhineland-Palatinate. Additional training rooms and the company administration are situated at the new Training Centre in Wiesbaden.