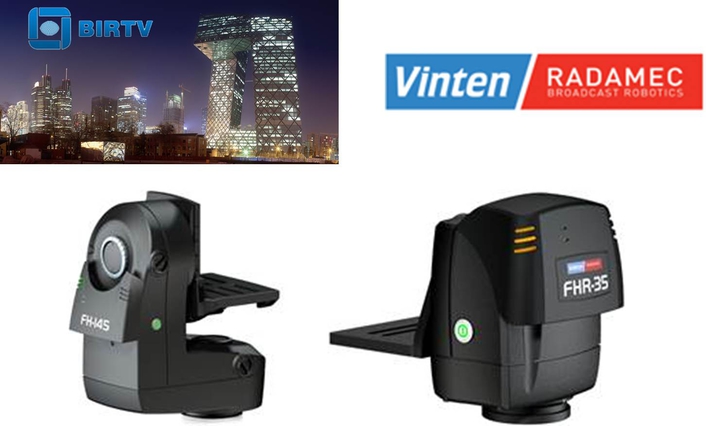 The extensive range of Vinten Radamec robotic camera support solutions can be seen on booth 8B15a at the BIRTV 2012 exhibition
Vinten Radamec®, part of Vitec Videocom, a Vitec Group company, will unveil its new next generation heads to China’s broadcast market for the first time at BIRTV 2012, in Beijing, on 22-25 August.

The new FH-145 pan and tilt head will be shown alongside the company’s recently released FHR-35, and will demonstrate Vinten Radamec’s latest technological advancements by incorporating its new Intelligent Control Engineering (ICE) platform. This forward-thinking technology enables operators to achieve unprecedented control, combined with simpler set up and easier to support installation.

The FH-145 and FHR-145 next generation series of heads were built on the successful performance of Vinten Radamec’s FH-100 and FH-120 models. The addition of the company’s ICE technology will give broadcasters the ultimate smooth image in both virtual and real worlds by providing an improved pan and tilt resolution of over two million counts per 360 degrees. The enhanced aesthetics of the heads include a new innovative tilt locking mechanism, improved drag and quieter robotic/manual changeover mechanism.

Virtual Reality (VR) upgrades will also be shown at BIRTV 2012, for the FHR-35, the manual and robotic FH-145 head and the robotic FHR-145 head. The upgrade modules make VR integration straightforward for broadcasters and allow all of the next generation heads to be used in a broad range of VR applications, from sports to studios.

Visitors can discover more details about the exacting performance benefits of the new next generation heads by visiting Vinten Radamec’s booth at BIRTV 2012. Additional products in the ICE range are expected to be released during the next 18 months.

Karen Walker, commercial manager, Vinten Radamec, says: “We’re really looking forward to showing China’s broadcast industry all of the unique benefits and outstanding performance of these next generation robotic products. We’ve worked hard to offer a range that anticipates the varying needs of our global customers, in fact, many of the enhancements gained from the ICE technology actually reflect customers’ feedback.

“The new pan and tilt heads perfectly demonstrate our commitment to creating forward-thinking technology and shows how we are rapidly advancing our product range.”

About Vinten Radamec
Vinten Radamec is a leading provider of robotic camera support systems offering engineering excellence and globally supported solutions for a wide range of technologies and markets. Its extensive range of products includes robotic heads, pedestals and controllers suitable for studio, OB and legislative environments.  Recognised for some of the most innovative broadcast robotics in the world, Vinten Radamec has a worldwide customer support network and distribution infrastructure, and an industry leading research and development programme.
Vinten Radamec solutions take a seamless role in the broader automated environment and thereby increase the flexibility of systems to take advantage of the economic and operational benefits of robotic cameras.