VCs Only Invest in Winners, a Dozen at a Time 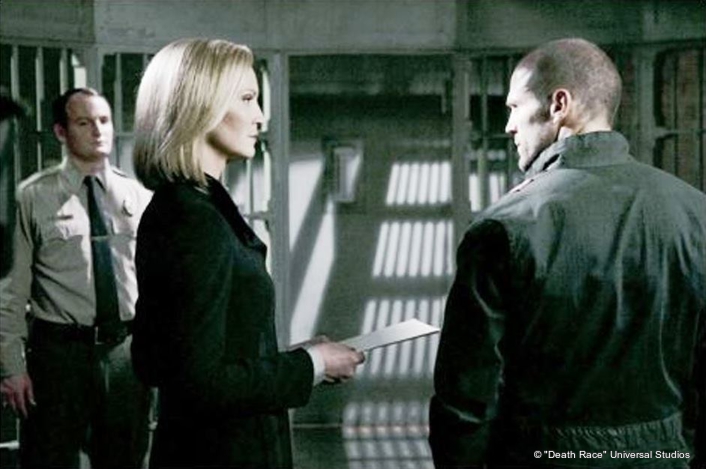 “The United States Penal System sends me the worst of the worst. Let's just say Mr. Ames that the life term you've joined us for may be a lot shorter than you think.”

I was recently told that I obviously don’t understand the big picture.

It happened when I was discussing Apple’s latest earnings report where they made a helluva’ lot of money but not as much as some young MBA on Wall Street (who never designed/manufactured anything) thought they should make.

The Apple stock went down while a Unicorn’s – great free-for-now service – stock went up even though it lost a ton of money and was light years away from making money.

I asked a VC (venture capital) MBA how a new company -- or for that matter, any of the nearly 230 Unicorns (firms valued in excess of $1B by someone’s fuzzy logic)  – that had received $175 M from his and other VC firms could be valued at $5B.

Better yet, why were they any different from Bernie Madoff’s Ponzi scheme?

These Unicorns came up with ideas on how to quickly make huge dollars for the VC firms as long as they spent (invested) money even faster so they could get other people to invest even more money to fund the added losses.

Bernie went to jail for his efforts.

The Unicorn founders get celebrated at parties and are speakers at SXSW (South by Southwest).
All because they have even higher paper valuations, even better burn rates (spending). 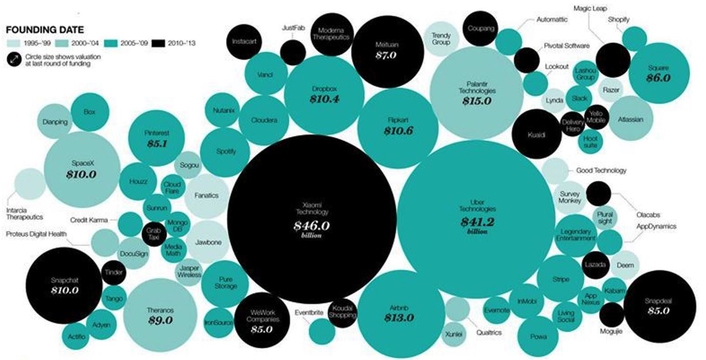 One Begets Copies – It wasn’t until early 2000 that the rare Unicorn appeared and it was marveled at because here was a start-up already valued at a whopping $1B.  So, more folks followed suit, insisting that their start-up was worth far more than the previous. Investors believed them, even though they seldom had a track record of success or failure.

O.K., is the Unicorn, or any of the other first-in-the-marketplace Unicorns, in danger?

Probably not; but what about the other very similar 10 knock-off ideas that the same young MBA VCs invested in? … I dunno.

However, if they reduce their burn rate (the rate at which they are spending/losing the invested money), it would be a sign of a fundamental weakness in the idea. The start-up MBAs would be sending signals to the VC MBAs that they were in deep pucky.

The VCs don’t worry because they have an exit plan – IPO (initial public offering) or have the company merged or acquired.

In other words, “Don’t let them see you sweat.”

Never in the history of venture capital have early stage startups had such easy access to so much capital.

Back in 1999, if a company raised $30M before its IPO, it was obvious the founders were great sales people or had an idea that would change the world.

Fast-Track – Despite the fact that the new firms had massive losses with little concern about when or how they would turn a profit, Unicorns have just kept coming, to the point that there’s no room in the barn for yet another similar – but different – new company with a well-painted, rosy future … someday.

The Unicorn (with “worth” in excess of $1B) has become part of a growing herd and all of them need to be regularly fed (more infusions of capital).

Unlike 1999, in this go-around they are able to find food with remarkable ease.

You simply pick a new valuation that’s a lot higher than the last one; say from $6B to $10B.

Prepare a new presentation deck, make the rounds with your solicitation offer and watch the hundreds of millions of dollars flow into your bank account.

Twelve to eighteen months later, it’s time to fly around the country and do it again.

New Presentation – While the burn rate (spending) is high for many of the Unicorns, it is almost too easy to draw another picture of all of the potential (growth, not profit) that is out there for them as long as VCs keep pumping in more and more funds.

It’s much better than conning your friends!

Yes, just as folks ultimately caught onto Bernie’s book-cooking scheme, there could be an adjustment for incremental investments in Unicorns.

The very enamorment with Unicorns is putting the herds and their participants (founders, employees, investors and limited partners) at financial risk.

As “they” reduce the valuation multiples from 10-20 down to 4-6, investors are suddenly less willing to participate in yet another round of financing.  Even when they do, it costs the company/management/employees much more.

That’s when the sharks begin to circle.

As the startups burn through cash, they are suddenly in a position where they have to accept new rounds of financing under less-than-ideal conditions; or what ticked off people call dirty terms – guaranteed IPO terms, liquidity rights, etc.

Most of these entrepreneurs haven’t learned how to deal with the idea of failure or layoffs.

Growth at all cost has been replaced with cautious investment and a realistic goal of turning a profit, even if it’s a very small profit.

Success on paper just doesn’t count for much when there’s no real cash-on-cash return!

It’s time for the Unicorn riders to focus on the long-term valuation of the shares and minimize the chances that the thing will die in the middle of the race.

The fundamental rule of a start-up should be -- become profitable so you aren’t at the mercy of the sharks.

Hundreds of thousands of small- to medium-sized firm CEOs who are in business for the customer (rather than the fast buck) have a firm grasp on the concept.

To grow, they spend (invest) gross margin dollars rather than dilute their equity in the firm.

They survive … they thrive.

If  they decide to go public or sell the company, they do it on their terms--not because VCs want to move their money to something that is newer, sexier and/or hotter.

And when they move on, they’ll do what they learned in school--write bigger checks and encourage the newly refunded Unicorn to spend for market supremacy. They’re told to do this regardless of the cost so they can raise more money to gather more fees to make new investments that will raise more money.

The valuation of the Unicorn herd is flat-out subjective.

Media noise will encourage more Unicorns to emerge to help with more publicity and hey, it works.

The whole idea that “if the Unicorn just raises one more round of funding everything will be just great” is probably what kept Bernie going in the waning days of his Ponzi scheme. 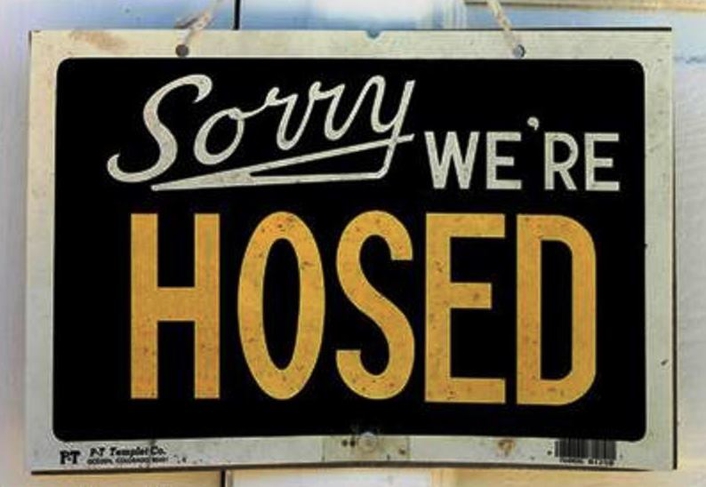 Mo Money – The availability of additional investments in a bad idea or one that is poorly executed only masks the problem.  At some point, the company simply runs out of places to hide all of the mistakes. Investors and the board wake up and close the door, putting the bad multi-billion dollar idea out of its misery.

Being successful on paper is one thing.

Being successful in terms of real cash-on-cash returns is something quite different.

More money, or ready access to more money, won’t solve the problem of simply doing what the rest of the herd does.

It will probably only mask the issues.

Management has to understand and appreciate the value of sound business execution, solving real customer problems no matter what the personal cost.

Forget what the rest of the herd is doing, especially if they’re doing it all wrong.

Just remember Jensen Ames’ response when the nasty bank teller said, “You wanted cash, there's a fee. You want a check instead?” Ames replied, “Seeing as how the company's out of business, not exactly.” 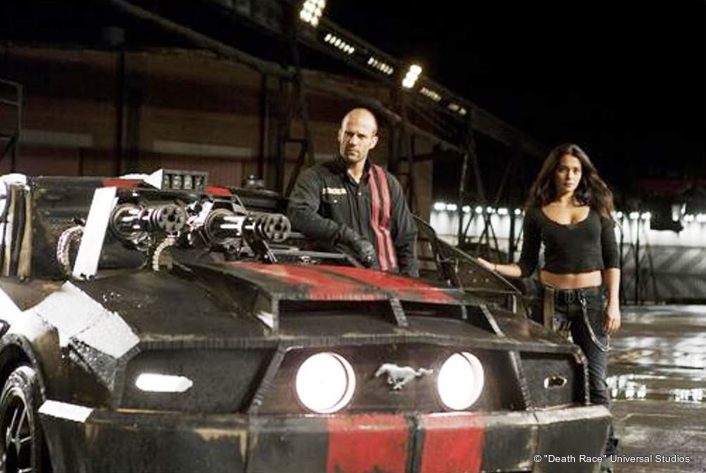