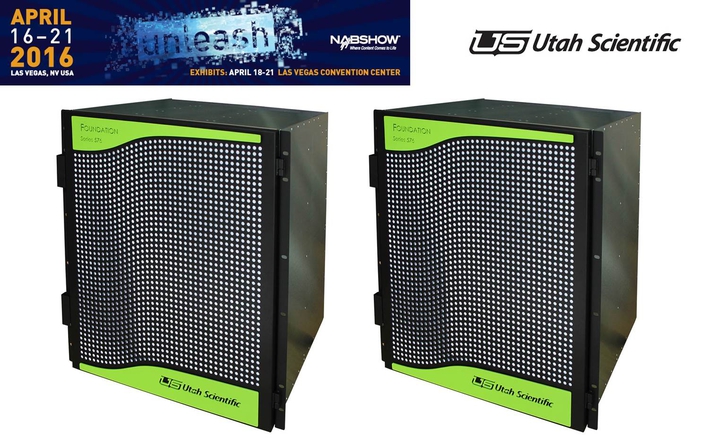 At NAB 2016 Utah Scientific announced the launch of the Foundation Series, the latest offering in the company's advanced family of hybrid digital routing systems. Ideal for a broad range of broadcast, mobile, corporate, and postproduction applications, the Foundation Series provides double the outputs without increasing the device footprint for efficient and feature-rich signal routing to monitoring devices such as multiviewers.

The Foundation Series leverages technology in Utah Scientific's well-established UTAH-400 Series 2 router family, designed to provide a single platform for all digital router applications and handle all digital signal formats. Foundation Series routers include newly designed output cards that use the same physical footprint as any Series 2 router to provide twice the number of outputs.

These outputs can be connected directly to multiviewers and other monitoring devices that are installed locally with the router. These outputs can also be repurposed as standard outputs to drive up to 100 meters of standard cable runs. The Foundation Series gives users the ability to deploy routers in a rectangular configuration, rather than the traditional square router design, and additional outputs can be added while still maintaining full crosspoint redundancy for both normal outputs and monitor outputs. Plus, the outputs can be loaded with all of the advanced feature cards currently available for Series 2 routers, including IP gateways, embedders/de-embedders, frame synchronizers, advanced audio features, and clean/quiet outputs.

"With the growing number of large-screen displays that use multiviewer technology to display multiple images on a single screen, our customers have an increased requirement for outputs that can be dedicated to monitoring. In the new Foundation Series, we've repurposed our Series 2 technology to offer customers a feature-rich yet lower-cost solution," said Tom Harmon, president and CEO, Utah Scientific. "The ability to drive normal cable runs as well as short runs to multiviewers is a unique attribute of the Foundation Series, and it's one more example of our ongoing commitment to provide the industry's most advanced signal distribution technology to our customers."

The Foundation Series can be controlled by any version of Utah Scientific's current family of routing control systems, including the SC-4, SC-40, and SC-400. In addition, the routers support hardware control protocol to enable control by third-party interfaces and legacy control systems.

Utah Scientific will begin shipment of the Foundation Series with the 288 frame configuration this June. More configurations will be available later in 2016. The routers come with Utah Scientific's best-in-the-industry 10-year warranty and no-fee product support.