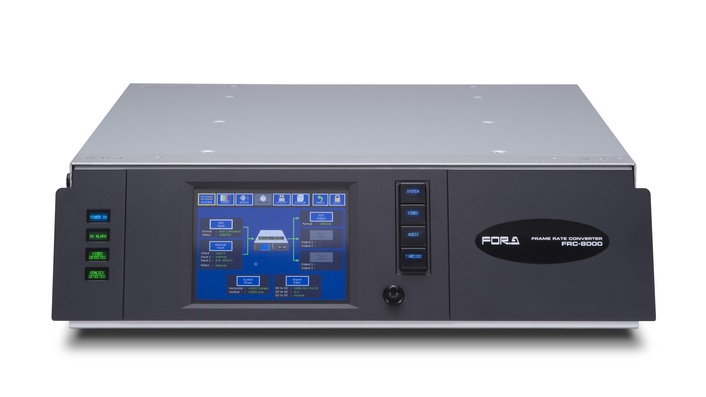 Unit optimizes conversion in environments with fast motion and high contrast
FOR-A Corporation of America, aleading manufacturer of video and audio systems for the broadcast andprofessional video industries, announces a new update for its FRC-8000HS HD/SD Frame Rate Converter tobetter accommodate the production of winter sports. With this software release,the FRC-8000 offers a unique level of in-depth user control, giving operatorsthe ability to customize settings based on their specific needs.

Users of the frame rate converter will now be able to select a ‘winter sports’ scene type, a special mode created by FOR-A to optimize the conversion process in environments with high-speed moving objects in highly saturated backgrounds that contain a lot of bright white, such as snow or ice.

“One of the strongest features of our FRC-8000 is the ability to fine tune our vector motion process,” explained Pedro Silvestre, Sales Director, FOR-A Corporation of America. “The FRC-8000 will produce world class results using the automatic conversion modes, but the new ‘scene type’ setting provides a new level of conversion, not available on any other motion vector converter.”

Offering simultaneous HD and SD output and an optional front touch panel for easy operation, the FRC-8000 is a popular frame rate conversion solution that has been utilized by many broadcasters to convert footage to the appropriate standard. Equipped with FOR-A’s proven motion compensation processing technology, the FRC-8000 supports a wide range of signals, including 1080i, 720p, NTSC and PAL. Up, down, and cross converters provide both frame rate and format conversion in a single unit. The solution’s new winter sports function will benefit broadcasters who are working on winter sporting events, such as speed skating, figure skating, skiing and snowboarding. While the FRC-8000 already offered a host of advanced functions to ensure excellent image quality, the new feature allowing users to customize the pre-set mode presents an even greater advantage. Broadcasters now have a wide range of control parameters, and can select from ‘normal,’ ‘sports,’ or ‘winter sports’ as their menu setting.

“We’re excited to offer this new feature,” said Silvestre, “The FRC-8000 was successfully used by a variety of broadcasters for the London Games last summer, and we anticipate that this new winter sports setting will prove popular for the 2014 Winter Games in Russia. More immediately, we look forward to seeing the new setting in action for upcoming winter sports productions.”

The updated FRC-8000 software was released at the end of November 2012.