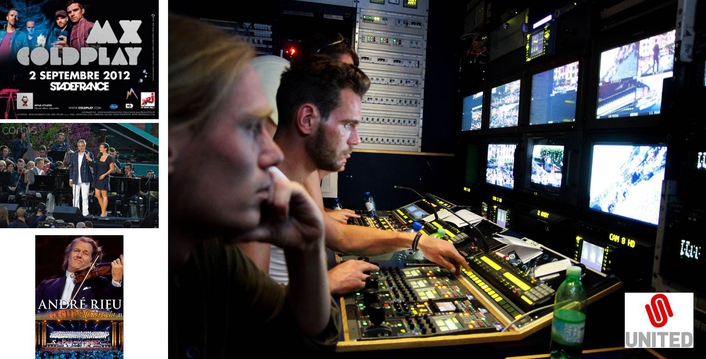 United was recently responsible for recording concerts by Coldplay, Andrea Bocelli and André Rieu
Among the rock and classical highlights of the 2012 concert season were the sell-out appearances of Coldplay in the Stade de France in Paris, Andrea Bocelli in the open air in Portofino (Italy), and André Rieu in Maastricht.

Three superstars from quite different musical traditions but with one thing in common: all three relied on the Hilversum-based broadcast service provider United Broadcast Facilities (UBF) for the recording of their acclaimed performances. And with good reason, because all three were planning to release DVDs of the concerts in question. Only state-of-the-art quality, then, would suffice.

This fact was reflected in the choice of outside broadcast vehicles. From the company’s lavish fleet, UBF selected OB 14 and OB 15 for the assignments, these being reference vehicles on the global broadcasting scene in terms of the quality of equipment on board.

The nerve centre of communications inside OB 14 and OB 15 comprises digital matrices from RTS. OB 14 is equipped with an Advanced Digital Audio Matrix (ADAM) with a 144 x 144 port configuration. In OB 15, a slightly smaller Cronus digital matrix with a 64 x 64 configuration has been installed. Supporting up to 464 ports, ADAM is RTS’s top-of-the-line matrix. With the redundant power supplies and redundant controllers, integrated MCII-e controllers allow the simultaneous use of up to 32 parallel AZEdit clients via Ethernet or RS-485. The RTS Cronus intercom, on the other hand, is a modular 32-port digital matrix intercom only two rack units in height that can be equipped with up to four AIO analogue or RVON-C VoIP cards with eight ports each. Relying on DSP architecture, each Cronus matrix is capable of uniting with up to three others to form an integrated system with 128 ports. In addition to the matrices, over 40 KP-12 and KP-32 keypanels from RTS form part of the equipment of the two trucks with twelve RTS 2W/4W interfaces and twenty-five belt packs rounding off the vehicles’ inventory.

“Of course, the rock of Coldplay and the classical sounds of Bocelli and Rieu are worlds apart musically,” says Bolke Burnaby Lautier, Manager Operations Sports and Events with UBF. “What this meant for us is that each production was different and came with a separate set of challenges. What all three productions had in common, however, was that we could never have realized them to the desired high standard without a reliable and highly sophisticated internal communications system at our disposal,” adding: “For years, we have been relying on equipment from RTS out of just such considerations. The quality of recordings we were able to achieve here confirmed the wisdom of this choice. All three productions ran like clockwork.” 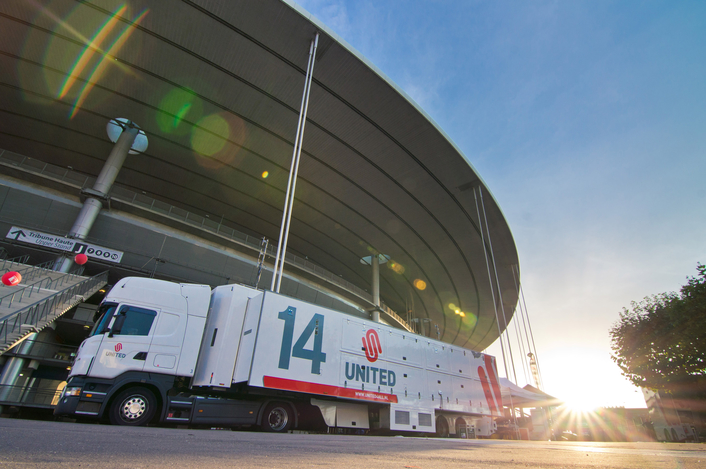