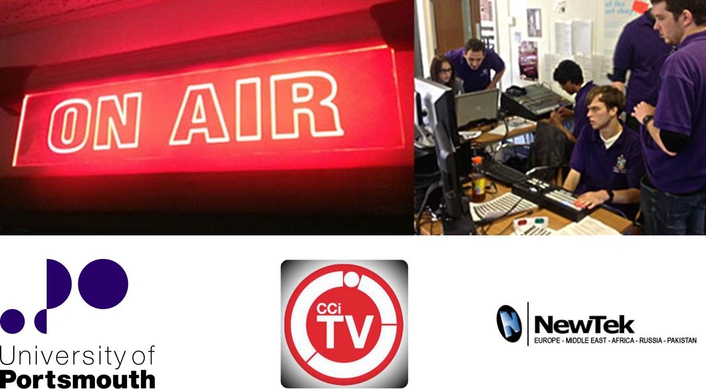 The running of the TV channel at the University of Portsmouth is a team effort
Students from the University of Portsmouth have broken new ground by being the first undergraduates in the country to produce and air four hours of live television coverage. Produced with two TriCaster live production and streaming systems… and a lot of enthusiasm, this live record performance required professional skills and endurance.

The 46 students and four staff from the School of Creative Technologies BSc Television and Broadcasting course ran a four-hour magazine-style show, which aired on the BBC Big Screen in Portsmouth Guildhall Square. The show was streamed live across campus and on the internet. Their mission was to promote and celebrate the work of fellow students from the University’s faculty of Creative and Cultural Industries, work they had prepared for the final year show.

Course tutor Charlie Watts said: “As far as we know, this has never been done or even attempted in higher education in this country before. I’m ecstatic with the end result. We have been building up to this moment for five years and I’m so proud of the students that we actually pulled it off and broadcasted consecutive programmes over the four hours. This year we have launched CCi TV Channel website, that streams the TV channel content 24/7, and also provides video on demand displaying of over three years of work.”

The broadcast transmission was broken into sections with Charlie, TV manager Lou Appleby and Principal lecturer Gary Bown overseeing the students’ showcase programmes, which included work from Art, Design and Media students as well as the live broadcast , to the BBC Big Screen of the BA "Fashion and Textile Design with Enterprise" students’ fashion show. Technical support specialist Steve Bellinger also played a key role throughout making sure the broadcast ran as smoothly as possible.

Gary Bown, a seasoned TriCaster user of several years said: “The final year show is a great opportunity for all levels of the TV and broadcast course to work together. Students did a fantastic job of producing and transmitting the show. Knowing we were being shown live in the city Guildhall Square added a little to the pressure, but we specialize in working without a safety net. We also have 100% trust in our TriCaster systems. Both machines performed flawlessly and helped to make the whole show look great!"

The live shows were a combination of magazine style programmes, featuring music, art, film, a game show, and a magic show.

Charlie said: “This live show will be hard to top for a while. The BBC trusted us implicitly to broadcast acceptable and professional content and we owe a big thank you to Portsmouth City Council for their continued support, for our presence on the Big Screen and for the investment they have made to make it such a major asset to the city. We know other universities around the country cannot believe our students produce live programmes every week. Now they will have to try and comprehend how we have managed to produce four hours of live TV, from two separate locations, while also transmitting all around campus and to the web.”

The running of the TV channel is a team effort, Charlie and the course team say that they are grateful to all who have contributed towards CCi TV's on-going success.

The School of Creative Technologies BSc Television and Broadcasting course of Portsmouth University purchased their first TriCaster live production system in March 2007 to broadcast the university graduation ceremony live. Their second TriCaster was purchased in 2009.

BSc TV and Broadcasting is an academically challenging course, with a strong vocational element. The main goal is to be able to give students firsthand experience in live broadcasting and an essential grasp of technical aspects which is a crucial component to their studies.

Charlie said: “The fact that we could even attempt this live show was all thanks to NewTek TriCaster. It delivers time and time again." 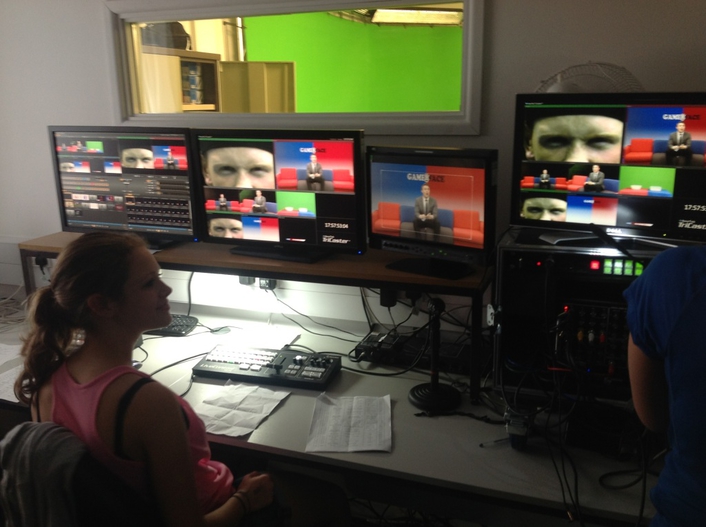