Since 2006, the French-language international TV network TV5MONDE has entrusted Ericsson with operation of its existing broadcast platform for production, playout and post-production.  The new contract with Ericsson, signed in 2012, includes integration per functional blocks and operations of TV5MONDE's new production, playout and post-production facilities until February 2018.  The Harris Broadcast NEXIO server domains were installed after the new contract was made valid.

The first of the two server domains is dedicated to content ingest, and acts as a backup to the playout SAN to add another layer of redundancy.  This network includes 64TB of content storage, protected by the unique, high availability RAID-601 technology of NEXIO servers.  The compact NEXIO Volt™ server, occupying just 1RU of rack space, provides the front end of the ingest system, with 42 baseband I/O ports on 11 NEXIO Volt servers.

The primary playout server has 24TB of storage, again with a NEXIO Farad RAID-601 SAN for security.  The system includes 9 Gb/s fiber connectivity, which supports 32 baseband I/O ports and 3 Gb/s of FTP bandwidth through the system. 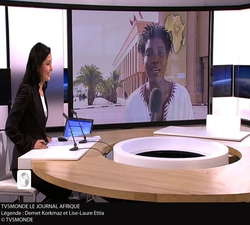 “Ericsson and TV5MONDE were impressed with our ability to deliver a fully integrated solution,” said Mathias Eckert, vice president, sales and services, Europe & Africa for Harris Broadcast.  “This is a proven solution we have delivered to other major broadcasters around the world, and which fits the needs of Ericsson and TV5MONDE.”

Harris Broadcast is an industry leader in delivering the most advanced, content-rich media experiences available for a wide spectrum of radio, television and private media networks around the globe. With more than 25 leading brands including Versio™, Selenio™ and Maxiva™, the company enables media organizations to tap into one of the broadest, integrated product and solution portfolios in the industry. Headquartered in Denver, Colorado, the company is widely recognized for its product quality and reliability, engineering excellence and customer service, and has earned nearly 100 technological firsts and more than 50 awards for technical innovation.