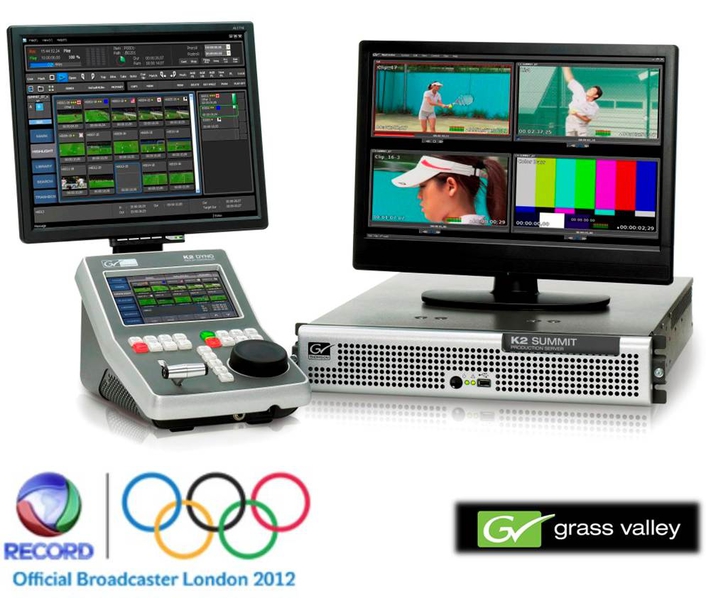 The Aurora HD DNP platform to be installed in London includes 10 Aurora Edit and seven EDIUS editing workstations
TV Record, Brazil’s second-largest television network, will deploy a complete high-definition (HD) production system from Grass Valley™ on-site in London for live and delayed coverage of the country’s athletes competing at the various sporting events this summer in London on its TV Record channel.

With an excited home audience watching, the broadcaster will leverage Grass Valley’s digital file-based technologies and engineering expertise—which have proven themselves time after time at many of the world’s highest-profile live sporting events—for all of its audio and video clip storage, editing and playout operations.

“Our past experience with Grass Valley technologies reassures us that we can provide our viewers with the same production values in London that we provide at home in Brazil,” said José Marcelo Amaral, Director of Operations and Engineering at TV Record. “While the world will be watching these sporting events, we want to give our viewers a world-class television experience. Grass Valley equipment will help us do that reliably and cost-effectively.”

Production staff will share clips stored on K2 Summit servers for production and playout during coverage of the sporting events this summer in London. The huge project, to be supported by Grass Valley engineers on-site as part of a Service Agreement, includes the design and set-up of the online SAN with K2 Dyno™ Replay Systems able to control all SAN files for slow-motion playout.

“We are very pleased that TV Record has committed all of its coverage of one of the world’s most watched television events to Grass Valley technologies and solutions,” said Jeff Rosica, Executive Vice President of Grass Valley. “They have continued to innovate and have put together one of the country’s most sophisticated newsgathering operations in the region. To think that they will now relocate much of that technology and work on-site in London, with the same capability, is remarkable.”

The network will use the Grass Valley Aurora suite of file-based tools to ingest, edit, and play out content within a completely file-based, shared storage production environment. The Aurora HD DNP platform to be installed in London includes 10 Aurora Edit and seven EDIUS editing workstations attached to 1,450 hours of K2 Production storage. The network will also set up numerous Aurora Ingest, Scheduling, and Playout stations; more than 30 Ingest and 10 Playout channels with up to a dozen Grass Valley K2 Summit servers.

Rede Record (part of TV Record) journalists and news production crews used an Aurora-based production system for the  2011 Pan American Games, in Guadalajara, Mexico, and are now using an upgraded version that includes several new ingest and playout channels. Additional EDIUS craft editing stations have been added to the same SAN to provide a tight integration between Aurora and EDIUS in a K2 SAN workflow.

About Rede Record
Rede Record de Televisãois a Brazilian television network, founded in 1953 by Paulo Machado de Carvalho, also founder of Rádio Record. Currently it is owned by businessman Edir Macedo, founder and bishop of the Universal Church of the Kingdom of God. Since 2007 it is the second most popular television network in Brazil after being in the last place of television networks for many years from the 1980s. With 58 years of transmission, it is also the oldest TV network in the country.

About Grass Valley
With a rich history serving the broadcast and professional video industries, the Grass Valley name is synonymous with innovation, leadership, and performance.  With a full range of products and services supporting many of the world's most high-profile live events, Grass Valley offers the most comprehensive portfolio of software, services and IT infrastructure. Customers deploying Grass Valley solutions include most of the world's leading broadcast and teleproduction IT facilities, independent video professionals, as well as emerging content creators and distributors providers of broadband, telecommunications, and transmission services.  When you’re watching news, sports, or entertainment programming, whether on a TV, the web, or a mobile phone, you’re watching Grass Valley at work in the connected world.