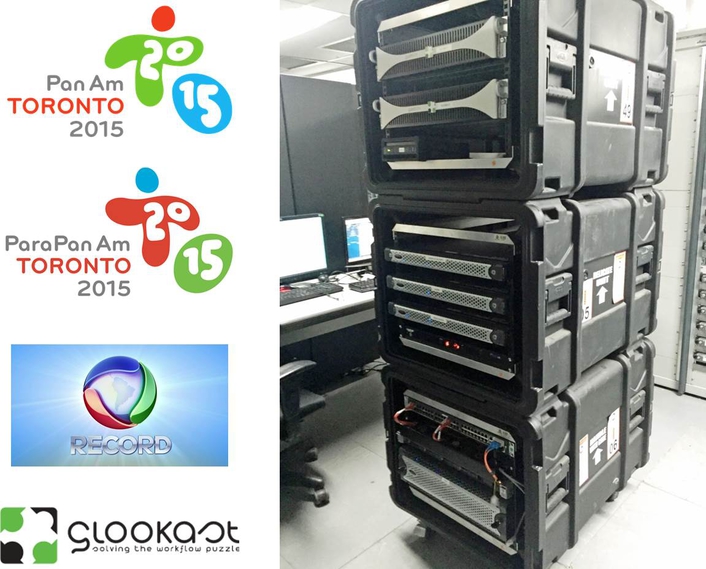 TV Record is leveraging cloud technology for the Pan American Games
GLOOKAST, an innovator in MXF workflow solutions, has announced that TV Record, the second largest commercial TV network in Brazil, has selected GLOOKAST’s Ingester turnkey solution to manage the ingest of multiple channels of file-based content into its Toronto-based Avid® Media Central UX platform during the next Pan-American Games.

Incoming files (from multiple sources and in multiple formats) will be processed by GLOOKAST’s Ingester solution while simultaneously adding key metadata information and creating a lower bit rate resolution for shot list editing in Avid Media Central. AAF sequences resulting from the shot lists will be relinked to the correspondent hi-res files for transfer to TV Record’s headquarters in Sao Paulo, Brazil, where stories will be finished and broadcasted nationwide. The GLOOKAST Ingester database will store all the relevant metadata generated throughout the games, allowing future repurposing of the content and as well as facilitating its export to digital archive systems.

“Sports events of this magnitude generate massive amounts of files, which can add up to many times the number of hours of coverage. We needed to ensure that our ingest system would provide efficient encoding and trans-wrapping of a wide variety of formats to fulfill our coverage requirements at the games. Since our facilities, both in Toronto and in Sao Paulo, are based on Avid Media Central, a proven compatibility with Avid systems was a key factor in selecting GLOOKAST”, said Jose Marcelo Amaral, Director of Engineering and Operations for TV Record.

“A tight collaboration between GLOOKAST’s and TV Record’s engineering teams was a key factor in this project. No two workflows are the same and we needed to implement one that would fully support TV Record’s requirements, which included the capability to receive a wide variety of formats, guaranteed compatibility with Avid’s Media Central UX platform, asset and metadata transfers to a facility located some 5,000 miles away, and the need for a robust solution that could operate under the fast-paced environment that an event of this nature presents.”, said Edel Garcia, EVP Sales and Operations, GLOOKAST.

About REDE RECORD
Rede Record is the second-most popular television network in Brazil.  Founded in 1953, it has 62 continuous years of transmission; it is also the oldest TV network in the country. Rede Record has more than 100 affiliate stations. Record International is an international channel available in North America, Europe, Africa and Asia. In a first for the network, Record signed with the International Olympic Committee for the exclusive rights for the free-to-air television of the 2010 Winter Olympics and the 2012 Summer Olympics.. The network also holds, until 2019, the Pan-American Games broadcasts rights.

About GLOOKAST
Established in 2009, GLOOKAST is redefining MXF-based broadcast and drama production workflows. The GLOOBOX and GLOOPORT family of products were developed from the ground up to support news, sports, archive, disaster recovery, and post-production workflows. With a set of modular and highly customizable tools, GLOOKAST makes implementation of true multi-format, multi-resolution workflows a reality.