Tagesschau is a German national and international television news service produced by Norddeutscher Rundfunk on behalf of the German public-service television network ARD. The main edition of the program is aired daily at 8:00 pm on Das Erste, the principal public TV channel. It is also simulcast on several ARD-affiliated networks and broadcast 24 hours per day via the digital channel Tagesschau24.

Having outgrown the studio it had occupied for the last 10 years, Tagesschau completed construction in 2014 of a new 320 m2 studio, at a cost of €23.8m. This state-of-the-art facility is now home to the 20 programs broadcast by Tagesschau every day, among them the television magazine Tagesthemen, the night show Nachtmagazin and the weekly review Wochenspiegel.

Forming the backdrop of the new studio is a large, curved media wall, capable of adapting to the graphics needs of the various different shows. The optimal brightness of the media wall projector is 20,000 ANSI lumens, but during testing it transpired that this level could only be achieved by setting the color temperature to 6,000 K. When this was reduced to 3,200 K (the same color temperature as all the other lights in the studio), the projector’s luminous intensity fell significantly. At the average camera aperture of T5, this resulted in the media wall appearing much darker than the news presenters standing in front of it. 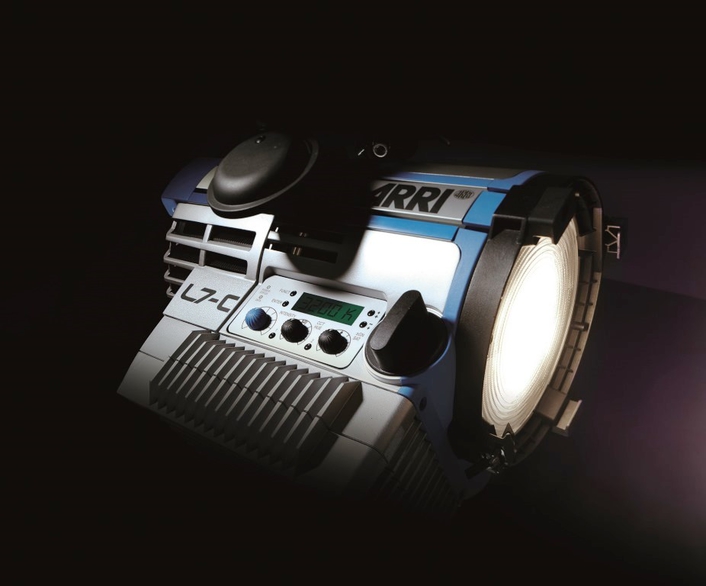 Clearly, the ideal solution was to find a way of setting the Fresnel lights illuminating the  news presenters in the main body of the studio to 6,000 K, as this would match the media wall when set to its optimal luminosity. Unfortunately, conventional tungsten Fresnels would not be able to do this, so ARRI provided some demo L-Series fixtures to the studio via its system partner, Medientechnik Duwe.

Following a successful demonstration, 99 ARRI L7-C lights were ordered for the new studio, with the installation planned and supervised by Medientechnik Duwe. L-Series lampheads were chosen because they offer the familiar feel of a traditional Fresnel, but with the versatility and power savings of a fully tuneable LED fixture. There is no change in color temperature when the L7s are dimmed, and their true Fresnel characteristics allow the news presenters to be lit flatteringly and precisely, without any spill light falling on the media wall. Tagesschau’s desired color temperature of 6,000 K falls easily within the 2,800 K - 10,000 K range of the L7-C.

Compared to the old studio with its tungsten lighting, the new ARRI L-Series units facilitate a power saving of approximately 60%. In addition, maintenance costs are reduced by the fact that the estimated lifetime of the LED light engine is 50,000 hours, and unlike conventional lights, there is no need to change bulbs or color filters.

About ARRI:
With headquarters located in Munich, Germany, Arnold and Richter Cine Technik (A&R) was founded in 1917 and is the world's largest manufacturer and distributor of motion picture camera, digital intermediate (DI) and lighting equipment. The ARRI Group comprises a global network of subsidiaries and partners that covers every facet of the film industry, including worldwide camera, grip and lighting equipment rental through ARRI Rental; turnkey lighting solutions through the ARRI System Group; lab services, postproduction and visual effects through ARRI Film & TV; and film distribution through ARRI Worldsales. Manufactured products include the ALEXA camera system and AMIRA documentary-style camera; Master Anamorphic lenses; L-Series LED and M-Series HMI lights; Pro Camera Accessories; and ARRISCAN archive technologies. The Academy of Motion Picture Arts and Sciences has recognized ARRI’s engineers and their technical contributions with 18 Scientific and Engineering Awards.