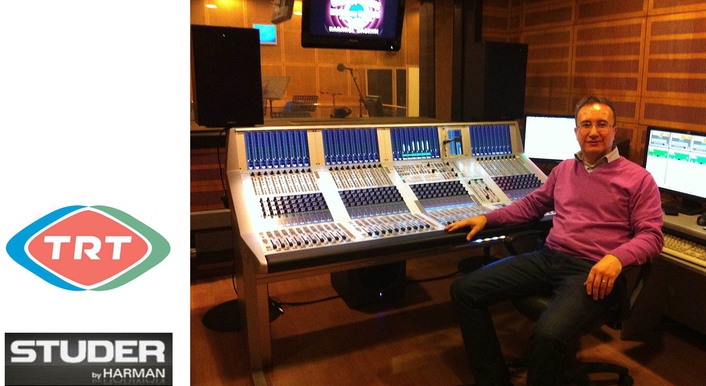 Erkan Gökceli with the new Studer Vista 9 digital mixing console
Turkish Radio and Television Corporation (TRT) is the national public broadcaster of Turkey, and broadcasts its TV programming around the world, offering more than 14 regional, national and international radio stations including the Voice of Turkey. TRT has relied on HARMAN’s Studer consoles since the 1980s and recently upgraded its Izmir Radio Studios with a Studer Vista 9 digital console.

“I have been working at TRT for more than 25 years in a number of capacities, and all that time we have depended on Studer gear to get the job done,” said Erkan Gökceli, Technical Manager and Designer at Izmir Radio Studios. “We’ve used everything from the old Studer 169 mixer to no less than 15 ReVox B77 reel to reel tape decks. As a broadcast and recording mixer at Izmir Radio Studios I put our previous Studer 902 console through every situation you can imagine but when it was time to upgrade our studios, we decided that we would move to a digital mixer with modern features and flexibility.”

“As someone who works with the equipment year-in and year-out, I insist that the consoles I use are robust and of high quality,” Gökceli noted. “We do a lot of live broadcast at Izmir Radio and TRT and as any live engineer knows there is no room for error in a live production situation. Based on our previous track record, I was confident the Studer Vista 9 would be completely dependable.”

“As expected, so far the operation of the Vista 9 has been flawless,” Gökceli said. “I’m also finding that the newer features of the Vista 9, such as the Vistonics™ touchscreen interface, the FaderGlow faders that can be color-coded by function and the total freedom to lay out input and master channels anywhere across the console’s surface have been incredibly useful. I can configure the Vista 9 any way I want it which gives me far more control flexibility than I’ve ever had and makes mixing a live or taped broadcast easier and more efficient than I could have imagined.”

HARMAN designs, manufactures and markets a wide range of audio and infotainment solutions for the automotive, consumer and professional markets — supported by 15 leading brands, including AKG®, Harman Kardon®, Infinity®, JBL®, Lexicon® and Mark Levinson®. The Company is admired by audiophiles across multiple generations and supports leading professional entertainers and the venues where they perform. More than 25 million automobiles on the road today are equipped with HARMAN audio and infotainment systems. HARMAN has a workforce of about 13,900 people across the Americas, Europe and Asia, and reported net sales of $4.4 billion for year ended June 30, 2012.