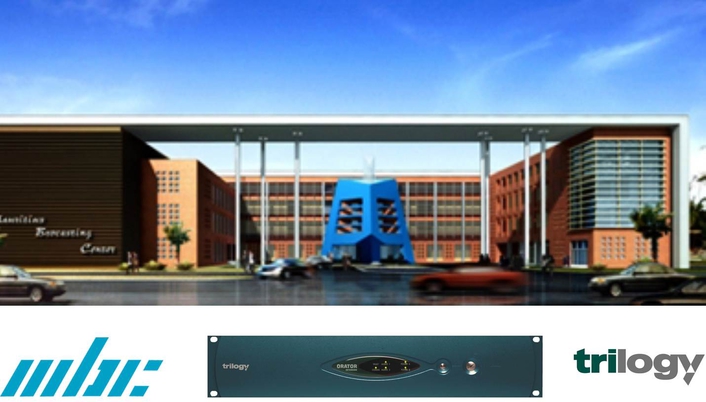 Supplied directly to Mauritius Broadcasting Corporation, the installation of the new Orator, a fully featured compact Digital Intercom with a 36 port configuration, will be used in the corporations’ new Central Equipment Room, Master Control Rooms and two studios. The link between the matrices and control panels is easily established via CAT 5 cables with RJ45 connectors. With an Orator Digital Matrix Intercom already installed in their current facility, the new and old systems are E1 networked together and to a Master Control Room (MCR) allowing for seamless operation between users in the different studios.

The familiarity of the Intercom and its Pathfinder Lite Configuration software, combined with the flexibility and scalability the Orator offers, meant that custom configuration was set up quickly and easily.  Key to Mauritius Broadcasting Corporation’s selection of the Orator Intercom was the ability for it to store four complete configurations within the matrix, which can be selected and run without the matrix being linked to a PC, when they have a short period of time to set-up and prepare new configurations for different events.

The intuitive Pathfinder Lite software is an easy to use interface that allows any system parameter to be readily edited or modified,  meeting Mauritius Broadcasting Corporations’ desire for a system that is easily configurable by the engineering team when needing to adjust settings according to demand.  Additionally, use of the Rapide software allows for non-intrusive real time configuration changes to the system.

Mauritius Broadcasting Corporation has a long history of utilising Trilogy’s equipment, having first installed the Orator Intercom, with in-ear monitoring and beltpacks, and two Mentor XLs and a MasterMind change over unit in their first fully digital Outside Broadcast (OB) vans in 2003 as part of their transition from analogue to digital.

Barry Spencer, General Manager - Broadcast at Trilogy, commented: “ Having previously deployed Trilogy equipment, Mauritius Broadcasting Corporation wanted to utilise their previous investments but add additional capabilities and increase the scalability of their communications network across the new studios. Working together, we provided full on line support to MBC Engineers to ensure they had maximum performance, whilst minimising expenditure and time spent on configuration. We look forward to continuing to work with them to meet all of their future studio and OB van requirements.”

To see the latest in Trilogy Communication’s Intercom and SPG systems, please visit us at IBC 2011, 9th-13th September, in Amsterdam on Stand 10.A29

Mauritius Broadcasting Corporation
Catering for a multicultural population, Mauritius employs 600 full time and 200 freelance staff producing content in a number of languages ranging from news to channels dedicated to culture.MBC broadcasts 17 Digital channels including 3 which will continue to transmit in analogue until digital switchover in 2013. In addition MBC transmits 6 radio stations across AM and FM bands, 2 of which are also sent by satellite uplink with 2 television channels to the dependant islands of Mauritius.