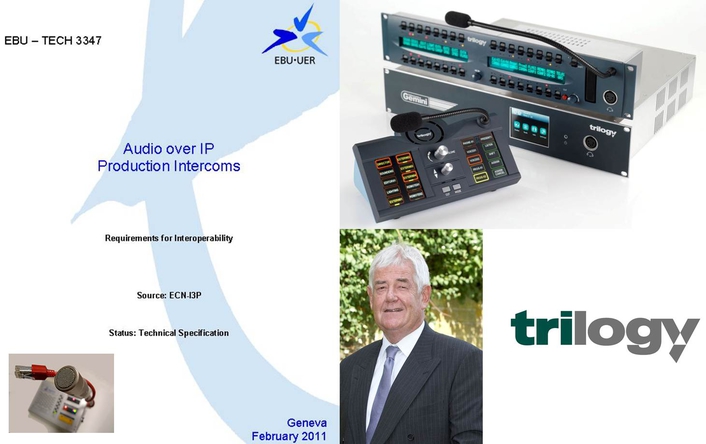 Barry Spencer: The Pioneers of IP Intercom Communications applaud new industry standard
Trilogy Communications, the global provider of digital intercom systems and Master Reference Generators to the broadcast industry, today announced that all their Intercom communications systems are compliant with the requirements of the recently announced EBU Tech 3347 Standard for Audio over IP Production Intercoms.

The new standard was announced by the European Broadcast Union in February and is designed to enable different manufacturers’ intercom systems to work seamlessly together in situations such as; linking different broadcasters over IP to the International Broadcast Centre at a large international event, or in everyday use to communicate between two studios or with an OB van. As the pioneers of IP Intercommunications within the broadcast sector more than a decade ago, Trilogy has advocated the use of IP technology within intercoms for many years and initiated the now mandatory Session Initiation Protocol (SIP) requirements within their products in 2007.

“Trilogy has very much been at the forefront of this first IP movement, developing our Mercury IP communications system in 2001. Most of our competitors at that time dismissed IP for Broadcast intercom purposes on the basis that it wasn’t sufficiently resilient, bandwidth was an expensive commodity, and the inherent audio latency would not be acceptable. So we are thrilled that this important technology is now getting the recognition that it deserves.” said Barry Spencer, General Manager Broadcast at Trilogy Communications.

Barry continues: “For intercom manufacturers such as Trilogy, who have already embraced this move and have been advocating the need for an industry standard for many years, we are now entering an interesting time within the industry as other manufacturers now look to how they will meet the standard. The EBU specification will open up the market and give broadcasters the ability to mix and match different vendor’s solutions, creating a shift of power away from proprietary vendors, which will inevitably create a more dynamic and user focussed marketplace. And we here at Trilogy are embracing this shift.”