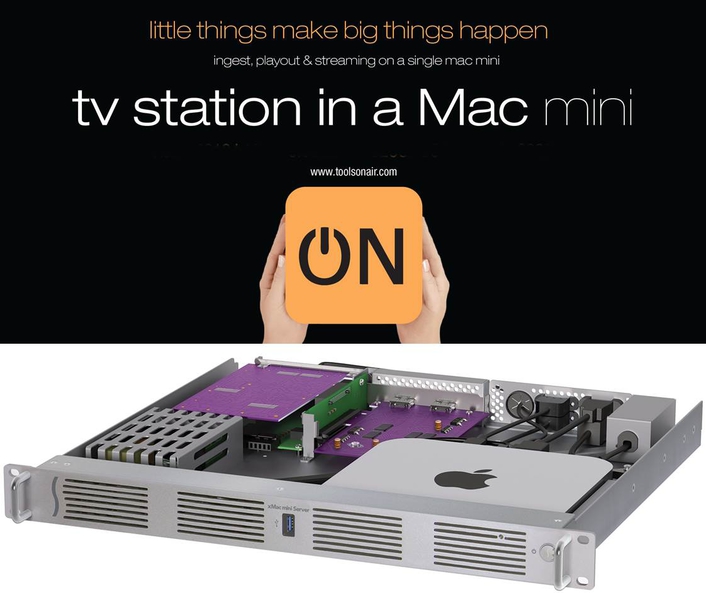 New Solution Takes Advantage of Mac mini's Small Form Factor to Provide Ingest and Playout for 12 HD Channels in Only 6U
Sonnet Technologies today announced that ToolsOnAir Broadcast Engineering has integrated Sonnet's xMac™ mini Server, a Thunderbolt™-to-PCIe® 2.0 expansion system, and a 1U rackmount enclosure for the Mac® mini computer into its new "TV Station in a Mac" solution. By combining the xMac mini Server with key components from its just:Broadcast Suite, ToolsOnAir has built a Mac mini-based appliance with a compact form factor and a central storage system to support a live, 12-camera production workflow.

The just:Broadcast Suite is an integrated suite of QuickTime®-based software tools that enable broadcast professionals to create a complete TV production facility in a Mac mini computer. Sonnet's xMac mini Server enables A/V professionals to rack-mount a Mac mini where it can be easily cabled and connected to two onboard PCIe slots via integrated Thunderbolt-to-PCIe expansion.

"In the previous generation of this solution, we needed a 5U rackable Mac Pro — and even then, the system only provided four HD ingest channels. But thanks to the compact 1U form factor of the xMac mini Server enclosure, we've been able to quintuple the workload within the same space," said Manuel Grund, product manager of ToolsOnAir´s just:in ingest solution. "When we tested the xMac mini Server, we knew it would provide the ideal solution in terms of reliability, ease of deployment, and suitability for a 24/7/365 operation. We highly recommend the xMac mini Server product line, and Sonnet's solutions will be our first choice for deployment in current and future projects."

The new ToolsOnAir "TV Station in a Mac" is able to capture up to 24 SD or 12 HD channels in ProRes HQ within only 6U of rack space. Each of the six Mac minis ingests up to two HD channels via the Blackmagic DeckLink card. The content is then stored in the flow:rage NAS system via the Gigabit Ethernet connection provided by the Sonnet Presto card. The Mac mini's internal Ethernet interface provides a 10Gb connection to an external Mac, where the operator can access the just:in and live:cut graphical user interfaces for remote control of the application. The system enables automated export of camera angles into a multiclip XML sequence that is readable by Apple Final Cut Pro® X and Adobe® Premiere® Pro, with automatic launch of the selected nonlinear editor upon export.

"ToolsOnAir's new implementation is exactly the leading-edge live production ingest and playout solution for which our xMac mini Server was designed. The system offers many advantages from both practical and technological perspectives by leveraging the Mac mini's small footprint and lower cost to provide support for 12 HD channels in only 6U of rack space," said Greg LaPorte, vice president of sales and marketing, Sonnet Technologies. "As an added benefit, ToolsOnAir has built the system using off-the-shelf hardware components, which radically reduces downtime and makes the exchange of defective parts a simple task in case of a hardware failure."

Sonnet Technologies Inc. is a leading provider of storage systems, Thunderbolt™ technology PCIe® expansion products, interface cards, and media readers for professional users in the audio, video, and broadcast industries. Sonnet's Thunderbolt expansion products enable the use of pro audio I/O and DSP cards, pro video capture and transcoding cards, interface cards, and other high-performance PCIe cards with mini, portable, and all-in-one computers. The company's product line features a range of high-performance, cost-effective, and reliable portable, desktop, and rackmount RAID storage solutions. For more than 25 years Sonnet has pioneered and brought to market numerous innovative and award-winning products that enhance the performance and connectivity of Mac®, Windows®, and other industry-standard computers.

Zest 4 TV Does it in Real Time with ToolsOnAir
24 Kitchen Makes it Fresh with  ToolsOnAir
Sonnet Announces Cost-Eff...actFlash® Media Reader