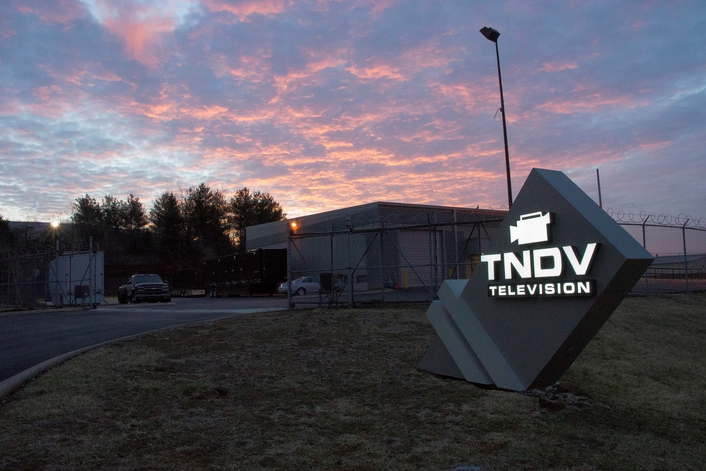 Dugger and his team re-designed the former armored truck warehouse from scratch, from concrete pours and office partitions to lighting, wiring and security systems.  The 10,000 square foot space provides plenty of room to securely park and work on TNDV’s trucks, and includes a networked infrastructure with state-of-the-art AV technology to share data, audio and video across offices and conference rooms.  The main board room is equipped with the latest HD playback and recording technology to evaluate and review projects with staff and clients, while UHDTV displays and fiber optic tie lines to the trucks enable real-time review of media still residing on video servers and ProTools.

While the technological gains are impressive, Dugger notes that the move was firmly rooted in square footage, with a need to better accommodate activity and growth.

“When we moved to our previous location six years ago, it was me and a truck,” he said.  “Ten years into business we are at five trucks with seven full-time engineers and a crew of production freelancers.  Bringing one truck into that facility meant we couldn’t prep for our next show effectively.  Here, we can pull three trucks indoors at once to do maintenance, make upgrades and change infrastructure as needed.  The last point is very important, as we do not force a fixed inventory on our clients.  We are a la carte for each show, and constantly reconfigure our trucks. Now we have a spot to prepare for the many upcoming truck shoots we have, while taking advantage of our newest 4K production acquisition systems.”

The large space also provides plenty of room for post work.  While not a post-production facility, TNDV frequently works with graphics, PowerPoint files and large video and audio files post-shoot.  The large amount of space allows staff to do post work in a separate part of the facility, away from the daily business operations.

“We have one particular office that we set with extra power and conditioning, additional video, audio and fiber tie lines, and sound reinforcement,” said Dugger.  “That way if we are cracking through some post-production on a loud concert we’re not disturbing the peace.”

This is just one example of how well-prepared the facility is to deal with media coming in and out, as well as moving files around on site.  The design includes single-mode fiber tie lines throughout, with between four and eight Cat6 cables going to each office.  This infrastructure supports anything from sending video feeds from one truck router to driving ProTools rigs on the audio truck — all while carrying traditional phone and internet data.

Dugger adds that the location gives his fleet quick access to interstates instead of having to slog through city traffic.  Another interesting aside regarding location is its close proximity to the production site of the ABC TV show Nashville — which shoots at the warehouse immediately across the street.

“Unintentionally, we’re building a small production community in this northeast portion of Nashville,” he said.  “We expect to be here for a long time, and I’m excited about identifying some key partners in the region that might need a space.  We have plenty of room to set producers up with offices for long term projects.  Essentially we want to build a ‘laborhood,’ where a group of complementary professionals can network, synergize and tap each other for resources, instead of having to live by Skype and conference calls to simply communicate.”

ABOUT TNDV: Television
Formed in 2004, TNDV: Television represents the culmination of many years of broadcast and live production for Nic Dugger, owner and president; and his staff of full time engineers. TNDV produces events from small single-camera productions all the way up to multi-million dollar international TV events, and takes pride in building custom solutions for challenging productions of any size, in any situation.  Recent productions include the live concert productions at the NCAA Final Four, the 2013 Re/Max Long Drive Challenge on ESPN, and the inaugural season of Sing for Your Supper on PBS