Tividoo Returns to the Streets of Mainz with LiveU 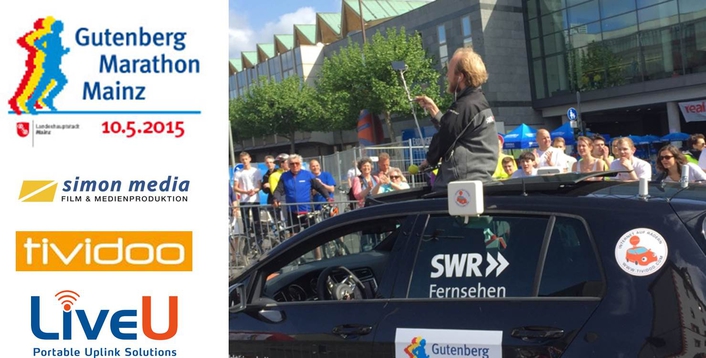 The popular event, held in the scenic German town along the banks of the Rhine, was again covered by regional public broadcaster SWR live online and with a roundup show on SWR TV Sport. Production company Tividoo worked in conjunction with OB provider Simon Media to capture and deliver the enhanced coverage. The iPhone 5 with LU-Smart allowed footage to be captured in a moving vehicle especially tailored for the event by Tividoo, using a unit to hold the phone steady. This allowed the race to be followed as it moved through the city providing a real sense of the occasion. A second LU-Smart was used for redundancy.

The iPhone used 3G/4G connectivity bonded with Wi-Fi in the car – provided by a multichannel VPN router – as well as additional SIMs in the router. The LiveU server received the feed in the stationary OB unit where it was vision mixed with signals from four other cameras, including broadcast units. In order to overcome fixed line difficulties, the final signal was also uplinked using a combination of cellular and Ka-Sat connectivity.

Tobias Gramm, Managing Director of Tividoo, said, “We were in charge of the technical planning along with SWR Sport Editorial this year for the expanded coverage. We wanted to be able to provide truly dynamic footage as cost-effectively as possible and to give a real sense of the movement of the runners in the race. Using LiveU’s LU-Smart allowed us to do that; it really is remarkable technology. We know that SWR was very happy overall with the quality of our expanded production.”

Zion Eilam, Head of Business Operations Europe, LiveU, said, “This is another clear example of the flexibility of our platform, with Tividoo able to select the precise tool for the production. The LU-Smart is designed to allow bringing unique viewpoints to viewers and has proved itself popular in the both the sports and news markets.”

About LiveU
LiveU is the pioneer in IP-based live video services and broadcast solutions for acquisition, management and distribution. LiveU's award-winning technology enables live video transmission from any location around the world with lightweight, easy-to-use equipment.  From backpacks to smartphones, and satellite/cellular hybrid to external antenna solutions, LiveU offers a complete range of devices for live video coverage anytime, anywhere. In addition, LiveU offers extensive cloud-based management and video distribution solutions. With top-tier customers in 60+ countries, LiveU’s solutions are being utilised for breaking and developing news and high-profile events, such as the FIFA World Cup™, Winter and Summer Olympic Games, Presidential Campaigns, Super Bowls, US Collegiate Championships and red-carpet events. LiveU’s solutions include multiple 4G LTE/3G, HSPA+, WiMAX and Wi-Fi cellular links, which are optimised for maximum video quality based on the available network conditions.