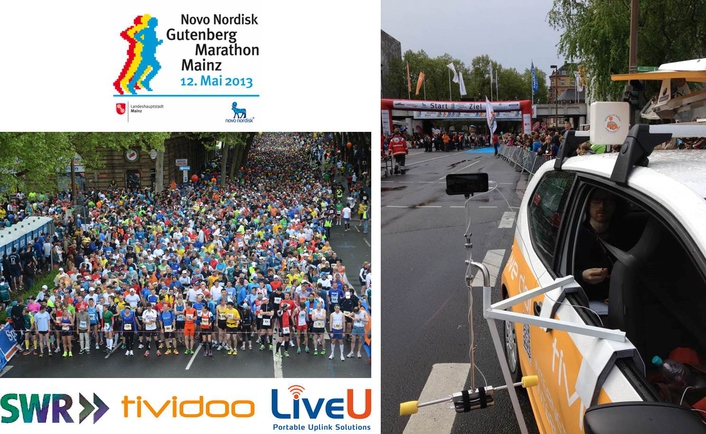 The marathon – which attracted approximately 9,000 runners and 15,000 spectators – was covered by a combination of emerging technologies. Tividoo filmed the event from a car alongside the runners, and then held post-race interviews with the runners in the main square. The car was fitted with a Viprinet Multichannel 510 Router that can bond up to 4 x 4G networks as well as a Ka-Band satellite connection. This created a WLAN around the car. While moving and filming the runners 4G uplink connectivity was used, augmented with Ka-Band when stationary at the end of the race. An iPhone 5 with the LiveU LU-Smart app and an LTE SIM was attached to a steady rig and a stabilised car mount and used for the actual video capture.

Tobias Gramm at the production company Tividoo, says, “When we were preparing this production we turned to Netorium as we recalled a conversation about LiveU and its iPhone app for live transmission. We believe that LiveU has the only app that can stream at broadcast quality to a server with SDI output and this is what we chose. It worked very well allowing us to supply high quality coverage.”

Zion Eilam, LiveU’s Key Account Executive, says, “The breadth and depth of LiveU’s range of bonded modem products means that there’s always a solution for every occasion. Sporting events like this are an obvious candidate to benefit from our innovation and we’re very pleased that both the broadcast and online communities are adopting our technology.”

About Tividoo
Tividoo is an innovative production and consulting company, offering mobile connectivity and broadcast solutions as well as product sales and consulting for broadcast and beyond in Germany. The company’s so uplink vehicle provides 4x 4G cellular network connections and Ka-Band satellite broadband internet for video streaming and more. Tividoo was founded at the end of 2012 and is sales partner for Viprinet, Dawson Dynamic and LGZ Broadcasting Tech.

About LiveU
LiveU is the pioneer of broadcast-quality, video-over-cellular solutions that allow live video transmission (HD and SD) from any location around the world.  With top-tier customers in 60+ countries, LiveU’s solutions have been used for breaking news and high-profile events, including the 2012 US Presidential Campaign, London 2012 Olympics, Hurricane Sandy, 2011 British Royal Wedding, GRAMMY Awards®, NBA and Super Bowl. From backpacks to smartphones, LiveU offers a complete range of devices for live video coverage. LiveU’s solutions include multiple 4G LTE/3G, HSPA+, WiMAX and Wi-Fi cellular links, which are optimized for maximum video quality based on the available network conditions.