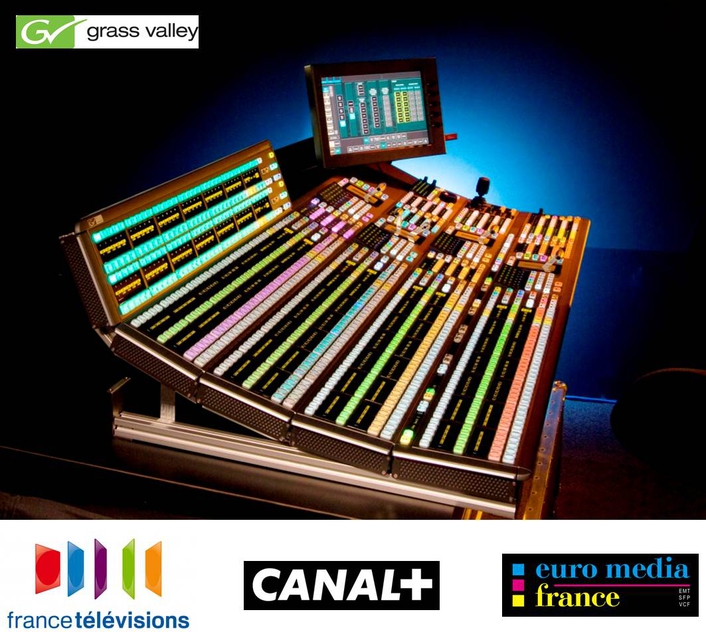 Canal+ has installed a 4.5 M/E Kayenne XL switcher panel in its studio 2 in Issy-les-Moulineaux, near Paris. The switcher is equipped with the full range of options, including six keyers on each M/E bank and the extended DVE option giving a total of 20 channels of digital effects which can be used in any part of the program flow. The order also included a Grass Valley Trinix™ NXT router, which is tightly integrated with the Kayenne panel, allowing the switcher to access to source ID’s names managed from a single location.

“We have used Grass Valley switchers before, and that helps us with the transition to the Kayenne,” explained Ralf Atlan, Deputy Technical Director of Canal+. “Our operators can start using the new switcher with the Kayak panel already installed, and then move over to the more capable Kayenne panel when they are ready.”

“It is the Kayenne XL switcher panel that makes it a dream,” said Mokhtar Ait Naceur of France Televisions. “We first saw the new panel at IBC2008 which started the whole project for us. We have had DD35, XtenDD, and Kayak HD switchers from Grass Valley, and we are very much looking forward to putting all this extra power into action.”

Euromedia is one of the leading outside broadcast contractors in Europe and, to support its work at the FIFA World Cup in South Africa, it re-equipped three of its largest trucks with Kayenne XL switcher panels. It was a tremendous indication of the confidence Euromedia places in Grass Valley products that the new panels should first be used when the eyes of the world were on the output of the trucks.

“We have a long and successful relationship with Grass Valley,” said Julien Schneider, CTO of Euromedia. “We use Grass Valley HD cameras exclusively, including the LDK 8000 and LDK 8300 1x/2x/3x Super SloMo cameras, and we have also used previous Grass Valley switchers. What the Kayenne panel gives us is a natural evolution from previous switchers but greater power, efficiency, and capacity.”

“These are three tremendous orders for the Kayenne XL switcher panel, coming at a time when the panel and the Kayenne Video Production Center switcher is achieving remarkable success around the world,” said Jeff Rosica, Senior Vice President for Grass Valley. “These orders underline a critical design decision we made when developing the Kayenne switcher, to create a switcher with unprecedented power and flexibility, which could do things that no other switcher can, but with the ability to use the Kayenne control panel with our Kayak switcher electronics to extend the Kayak's capabilities.

“Perhaps the most telling comment is that our sales staff finds it challenging to sell training to new Kayenne XL panel customers,” Rosica added. “Time and again they are told that operators already know 90% of how to use the new panel because it is a Grass Valley switcher panel.”

The Kayenne XL switcher panels went into service in the Euromedia trucks in time for the World Cup in June; the Canal+ studio went on air at the beginning of September in time for the French national football competition; and the first of the France Televisions studios will be on air later in the year.