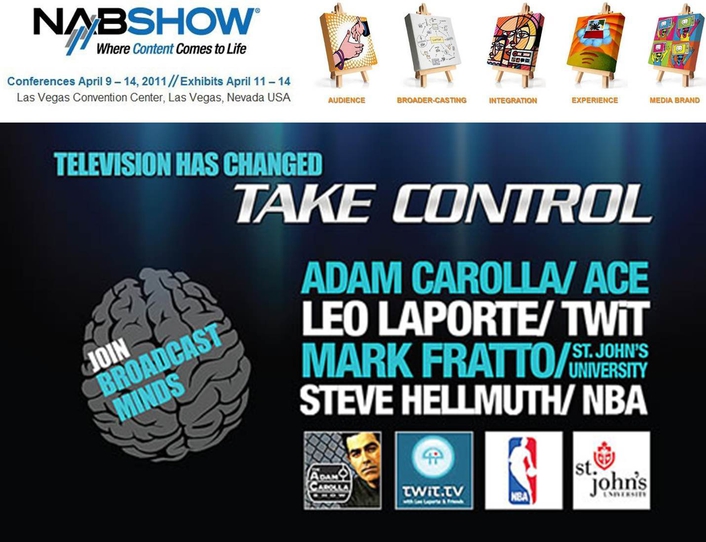 NewTek Brings Together Adam Carolla, Leo Laporte, Mark Fratto and Steve Hellmuth at NAB Show 2011
NewTek, a worldwide leader in video and 3D animation products, will present the second annual "Broadcast Mind" event at this year's National Association of Broadcasters (NAB) Show. Some of the most successful digital media influencers in the industry will discuss how to succeed in the new television landscape. The free event will be held Tuesday, April 12 at the Renaissance Hotel Ballroom (adjacent to the Las Vegas Convention Center), beginning with a cocktail reception at 6:00 p.m. PT, followed by a 6:30 presentation.

NAB attendees will connect with influential broadcast industry figures, including:

This candid "living room" discussion will be moderated by Streaming Media Editor, Eric Schumacher-Rasmussen. Guests are invited to participate in a Q&A session during this event. NAB attendees are advised to pre-register for this "must-attend" event.

According to Laporte, what he likes about the digital revolution is its democratizing nature. "If broadcasters are willing to think out of the box and throw away their notions of what broadcasting is, they can take advantage of and profit from the digital revolution," he said. "Anyone who has an idea they want to share and a potential audience, can produce and broadcast for themselves. This technology, along with NewTek TriCaster, allows you to get your voice heard. For me that is the most important transformation."

At NAB, NewTek will award over $100,000 in prizes with the TriCaster-A-Day Giveaway. For more information regarding NewTek at the NAB Show, visit: newtek.com/nab. For up-to-the-minute details on NewTek at NAB, follow NewTek on Facebook and Twitter.

With NewTek TriCaster™, anyone can simultaneously produce, live stream, broadcast, project and record HD and SD network-style productions. A single operator or small team can switch between multiple cameras, virtual inputs and live virtual sets, while inserting clips, titles and motion graphics with multi-channel effects. In addition to the Adam Carolla Show, NBA Development League, St. John's University TWiT.TV, and TriCaster is used by broadcasters, webcasters, sports organizations, schools, houses of worship, government agencies and others to provide a new level of extended programming and content to their audiences.