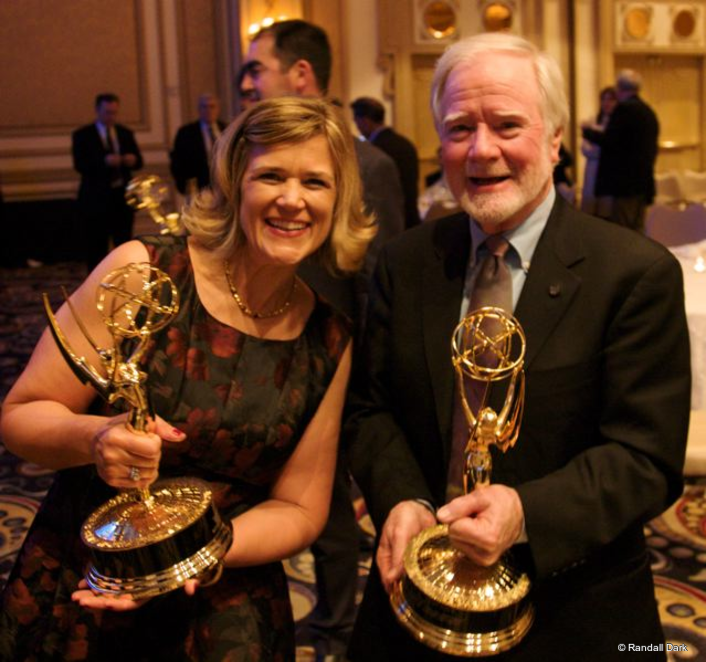 SMPTE Executive Director, Barbara Lange with SMPTE Life Fellow, Larry Thorpe of Canon U.S.A. Inc
SMPTE was the recipient of the esteemed Philo T. Farnsworth Award by the Television Academy at last night's 66th Primetime Emmy® Engineering Awards Ceremony, during the International Consumer Electronics Show (CES) in Las Vegas. The award honors an agency, company, or institution whose contributions over time have made a significant impact on television technology and engineering.

Founded in 1916 under the chairmanship of famed inventor Charles F. Jenkins, SMPTE was chartered to develop standards and provide training to streamline the U.S. government's burgeoning use of motion picture products. Increasing its scope in 1950 to embrace the emerging technology of television, the Society has continuously developed standards and educational programs that have made substantive impacts on this industry.

Notable technological advancements from SMPTE include the Society's trademark color bars and its core high-definition (HD) work including the Emmy Award-winning HD-SDI (serial digital interface) standard. Along with being responsible for the newly published and developed standards for the next-generation television format characteristics of ultra HD, high dynamic range, and immersive audio, SMPTE continues to contribute to the television ecosystem as it expands into a wide array of distribution channels enjoyed on omnipresent devices. This is SMPTE's eighth Emmy Award. 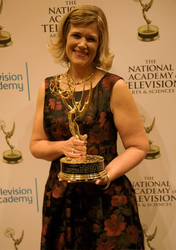 Barbara's acceptance speech:
I thank The Academy for this prestigious honor and recognition. I am proud to accept this award on behalf the SMPTE Board of Governors and our international membership, including an army of dedicated volunteers.

For nearly one hundred years, it has been the pioneering thinking of our members and volunteers who make television innovation possible so that consumers can enjoy a quality motion image. Technologies, such as the color bars, HD-SDI, as well as our latest work in UHD, high dynamic range, immersive audio, and tactile essence are the result of technology leaders coming together to standardize and educate the industry. And like Farnsworth before us, this work will continue to expand the boundaries of the television ecosystem as the industry and consumers demand more from a multi-platform environment. I know that 100 years from now, SMPTE will continue to be an integral part of the moving image technology ecosystem. Thank you so very much for this honor.

Larry joined Canon U.S.A., Inc. in 2004 as National Marketing Executive for the Broadcast & Communications Division. He was promoted to Senior Fellow in 2012. He is a renowned industry expert in the field of video acquisition. He spent more than 20 years at Sony Electronics pioneering the development of HDTV and digital production technologies in the U.S. broadcast and motion picture industries. Prior to that, Larry worked for RCA’s Broadcast Division in Camden, NJ, from 1966 to 1982, where he developed a range of color television cameras and telecine products. From that work Thorpe holds 10 patents in the field of broadcast development. He has published more than sixty papers on camera technology and the topic of HDTV imaging. Larry is a graduate of the College of Technology in Dublin and began his career as a design engineer with the BBC in London.

The namesake of Larry's award, Charles F. Jenkins, is the founder of SMPTE.

During the evening, Alex Trebek and Yahoo Tech founder David Pogue served as masters of ceremonies.