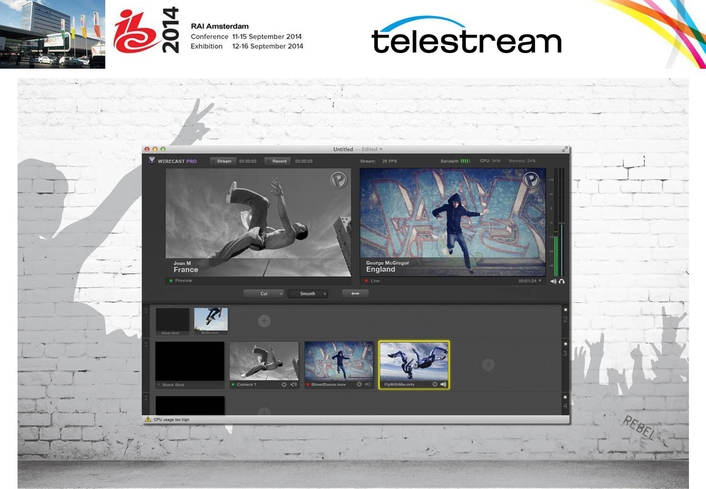 "Wirecast 6 is packed with many valuable new features for our users – it’s our most ambitious release yet,” said Barbara DeHart, VP of Desktop Business at Telestream. "Wirecast 6 offers functionality previously only found in hardware switchers at a much higher cost. This facilitates even higher quality production for sports and live event broadcasters, houses of worship, educational institutions, and anyone aspiring to begin live streaming."

Wirecast Pro 6.0 adds a powerful Replay capability allowing capture and replay of clips during live production with the ability to slow down, speed up or scrub across the clip and find the exact moment to show. Replay is perfect for sports broadcasters or anyone who wants to reshow portions of a live broadcast.

For adding user-generated content to live broadcasts, Wirecast 6.0 includes iOS device support and social media feeds. Users can bring in live feeds from iOS devices via Wi-Fi. Social Media support has been added so that Twitter messages can be overlaid directly on output.  To maintain control, operators can easily search and select only the Tweets they wish to display.

Additional enhancements of Wirecast 6.0:
·    Support for the latest 64-bit Windows and Mac OS releases means improved performance and fewer memory limitations.
·    Program productions to run 24x7 workflows automatically
·    Audio Preview allows users to check audio before it goes live
·    More keyboard shortcuts for faster switching, shot set-up, and production
·    Recoverable file-format ensures that even if your system crashes, you can recover your recording up to the moment of the crash.
·    Mac Retina Display support at 2880 x 1800 resolutions

"Our commitment to Telestream products has proven to be our best ally on our path to success as a Live Event Production and Multimedia Development Company,” says Hugo Simoes, Multimedia Developer at Wirestream Media and a beta tester for Wirecast 6. “With Wirecast version 6, Telestream continues to lead the way in live streaming production. Some of the most exciting features for us include 64-bit support to ensure efficient computer performance; Replay to allow us to switch in important live segments right from the interface; and the ability to create Playlists on the fly."

Pricing and Availability
Wirecast 6 will be released in Q4 2014, and will be unveiled to the public for the first time at the International Broadcast Conference (IBC) on stand 7.C12. Wirecast Studio is priced at $495. Wirecast Pro, priced at $995, adds support for more advanced production features and additional input sources. Customers who currently own Wirecast can upgrade to Wirecast Studio 6 for $149 and to Wirecast Pro 6 for $295.

Against a background where numerous large manufacturers appear to be struggling and a host of smaller companies have been the subject of acquisitions and mergers Telestream will arrive at IBC 2014 reporting strong revenue and profitability growth.

A slew of new products have fuelled this growth in every geographic region worldwide with strong growth being experienced in North America, closely followed by Europe. Having an enviable track record of posting profitable growth for the last 14 years, Telestream now reports that sales of its flagship Vantage transcoding and workflow automation systems increased by more than 40 percent last year.

The company’s CEO, Dan Castles, believes that its success can be attributed, in part, to Telestream’ s long track record of innovation in the file-based workflow space and understanding what the company can and cannot offer to customers. The majority of its management team has been with the company since its inception, and this stability is reflected in the consistent adherence to a strategy that has drilled down deep within the file based workflows.  Telestream customers appreciate the company’s commitment to being their trusted partner for the long haul through the transition from baseband to file-based workflows.

Telestream’s growth built on consistent customer focus
“Telestream offers its customers a very clear proposition,” stated Dan Castles. “We were one of the first companies to develop file-based workflow solutions as long ago as 1998 and today, our products reflect many hundreds of man years of development in this area. We are financially very solid and this has allowed us to stick to our strategies and not be tempted to chase opportunities that may bring in short term results, but distract us in the long term from executing on what we have committed to customers.  We are very relevant to our customer base, and we take that role extremely seriously.” 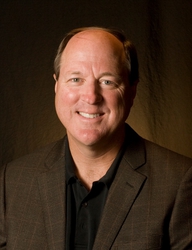 Market forces have driven recent corporate acquisitions, and some of these companies were struggling to survive. As a result, there are new combined companies, new management, and typically, new strategies. One of the likely victims during these transitions are customers who may have purchased products from one of these companies only to learn that a change of direction has resulted in product decisions that impact the original cost of ownership that was part of the initial purchase decision.

“Based on our own experience of acquiring companies, we know that they have to be implemented carefully and strategically,” stated Castles. “Owning a new piece of intellectual property does not mean that you understand the market it serves nor that it will integrate harmoniously within your existing product portfolio,” commented Castles. “We believe we are the right size as a company – not large and unwieldy, but not so small that we have to chase deals to remain in business. Our customers know we listen to their input as they see new products consistently coming to market that reflect their requirements. Implied in that equation is a level of trust that we will be around for years to come and that investing in products from Telestream is a smart decision long term,” Castles added.

Telestream announces collaborations with Apple, Avid, Adobe and Microsoft
Telestream thrives on collaborative ways of working with other technology vendors, and this is illustrated by news at IBC of co-operation with a number of key tech companies, including Apple, Avid, Adobe and Microsoft.  At the same time, Telestream has announced strong support and new product development based around the UK’s Digital Production Partnership (DPP) broadcast industry initiative.

“DPP is an excellent example of where many like-minded companies – many of whom are competitors – can come together and create an environment where all parties, and especially the end-user community, can benefit from collaboration,” stated Dan Castles. “This investment by many companies – of time, effort and goodwill – will reap rich dividends in the UK. We hope that the DPP will provide a vision of open interoperability that many other regions will follow.”