For the past two years, Telegenic’s T5 OB Vehicle – commonly known as T-Wiz, and based out of Atlanta Georgia – has been running the Sky Sports PGA Tour broadcast operations.

This year, Telegenic UK Deputy Head of Audio Simon Foster and Telegenic US Operation’s Manager Andrew Wisniewski undertook the re-design and commissioning of a complete overhaul of the T5 technical services. Telegenic chose a Riedel MediorNet de-centralized router to manage comms within the OB truck and the outfield operations, a Calrec Brio broadcast mixing console and RTS Telex intercom, and a SAM Kula Vision Mixer. At the heart of the operation was Lawo’s VSM (Virtual Studio Manager) system.

The aim of the exercise was to update and streamline the US operation, and bring the truck’s technical facilities into line with parent company Telegenic Ltd, based in High Wycombe UK. Lawo VSM is used in five of the seven OB Vans operated by Telegenic’s UK division, and so it was an obvious move for the US truck to follow suit.

The VSM system offers complete flexibility and is able to connect to all devices in the T5 OB truck, enabling Dante and RTS Telex gadget servers and to provide the Telegenic team greater control using just one system than is possible with multiple applications.

Riedel MediorNet connects to the Lawo VSM servers via the Lawo Ember+ Control Protocol, making all gadgets available to the engineers via the VSM platform, such as frame sync on/off, mic gains, etc. 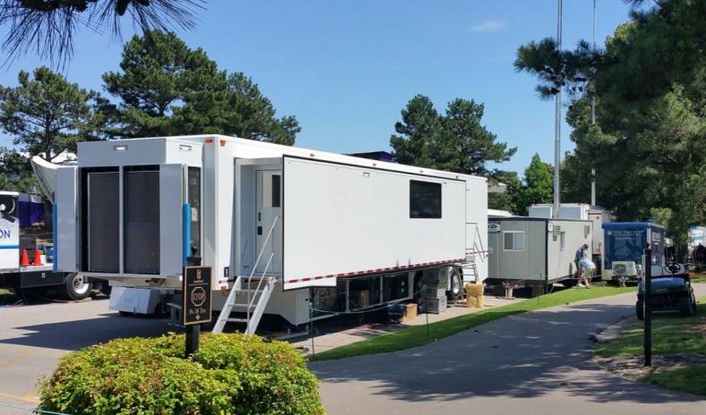 Foster and Wisniewski chose to run most of the configuration via software-based panels, as this gives greater visibility to the operators, keeping the front-end visual and simple, and allows unfamiliar engineers to easily get to grips with the truck features. Operators are able to program their own panels via mimic buttons, and engineers are able to view the signal flow using the Visual Link feature.

For the Sky Sports PGA tour broadcast, Lawo LBP-51 and LBP-17 hardware control panels are used for the outfield positions and EVS operators within the truck.

“This was a great project for us,” says Lawo’s Barry Revels. “The engineering team at Telegenic knew exactly what they wanted to achieve, so configuration was made easy for us. The panel layout designed by Telegenic really shows VSM off at its best, simplifying the operation of the OB but also presenting engineering with the detail required.”