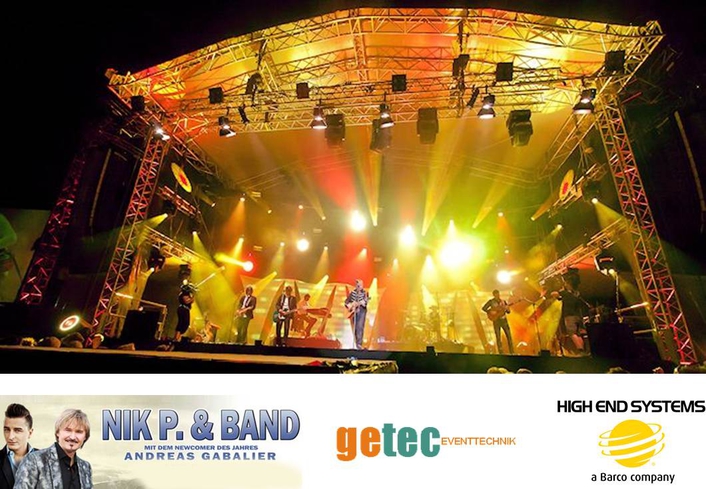 The tour required a lighting and set design rig flexible enough to fit a variety of venues, said Preworks’ Andreas Reinbacher. Lighting operator Michael Mayler jumped in to help in the design - which was important for the artists and their bands - “to make the messages of the songs visible to the audience,” Reinbacher said. Both artists are Austrian. Nik P. and his band perform what’s known as Schlager, or easy listening pop music. Andreas Gabalier is a folksinger.

“The output of the Technospot is incredible,” Mayler said. “In most situations I used only 30 percent of its intensity. The color mixing system is superb and the sharpness looks like spot lights in a much higher price range.”

Technospot is a hard-edge, compact automated luminaire designed for small and medium scale performance venues. With CMY color mixing, the fixture offers a number of effects including two rotating Lithopattern wheels, plus a rotating prism and animation wheel. Its large lens opening with a 5.3 inch aperture offers a full beam with zoom and more than 12,000 lumens of output.

In most of the show - about 80 percent of the songs - Mayler used custom content which he produced for the show. The DL.3 digital lights - an automated luminaire with an on-board media server - projected the content onto three 4x3 meter screens. By using the DL.3s, he said he can always guarantee the best projection quality in any venue on the tour.The three projection screens were placed in different positions behind the band, allowing Mayler to play with “more planes” with this configuration. He also used the DL.3’s Collage mode to combine the images from the three units into one large panoramic image at times during the show.

For extra effect, Mayler deployed the Pixilation LED graphic display luminaires - the SHOWPIX and the smaller unit in the family, the StudioPix. Mayer used solid colors on the LED displays to serve as wash lights when nothing was being projected on the video screens. But for highlights, he used the units as “eye-catching blinding effects,” he said.

Mayler controlled the show with the Road Hog Full Boar with Road Full Boar Wing. “With this system I am always happy,” he said. “The latest version of software, v3.2.2 is working fine and with support from Preworks all the customers are happy with the current Wholehog product line.”