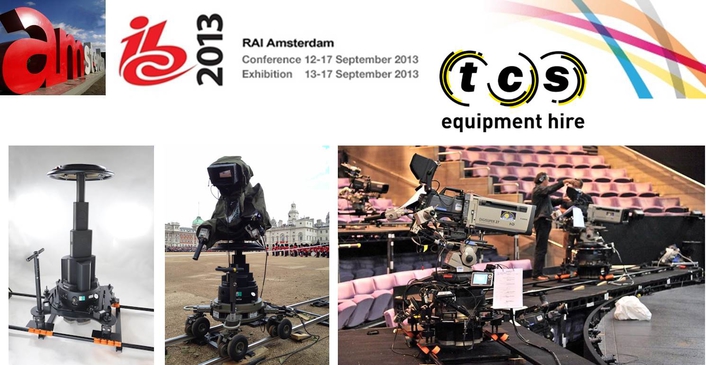 .
The TCS Skquattro Mk 2, a major innovation in broadcast camera pedestals, will make its European show debut at IBC 2013, Amsterdam, September 13-17. The Skquattro Mk 2 was developed by The Camera Store (TCS), a Vitec Group company, which supplies camera support systems on a rental and purchase basis for use in broadcast television and digital film production.

"The Skquattro Mk 2 is an evolution of Vinten's established and very successful Quattro pedestal," explains Tim Highmoor, head of rentals at TCS. "The Skquattro is a unique product designed exclusively for the rental market. It enables operators to deliver low and high viewing angles, including live tracking shots with up to 99 centimetres of on-shot elevation adjustment, while moving camera, lens and viewfinder payloads of up to 100 kilogrammes over a smooth studio floor."

Designed in co-operation with Grip Factory Munich, the Skquattro Mk 2 was first used during broadcast coverage of the BRIT Awards at the 02 Arena in London. It allowed film-style production while retaining the stability and precision for which Vinten pedestals are reknown.

"The popularity of large-screen domestic television receivers has made stable camera operation as vital for broadcast productions as for film," adds Marcus Buetefuer sales manager of Grip Factory Munich. "We are greatly impressed by the stability and versatility of the Skquattro Mk 2 and will be demonstrating it throughout IBC."

About TCS
Established in 1996 and based in West London, The Camera Store (a Vitec Group company) draws on many years of experience as television cameramen to guide clients in their choice of equipment. It has a large stock of standard equipment, including pedestals, tripods, heads, crane arms, lighting, fibre-optic cable and camera-support accessories. The Camera Store offers a countrywide rapid response delivery and collection service embracing large or small items. It is always ready to meet the challenge of improving existing kit or developing new production tools.