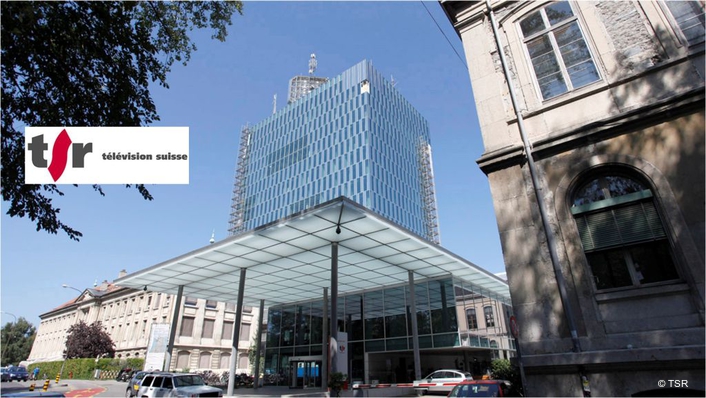 TSR Broadcast Centre in Geneva
SGT in cooperation with BFE, announced that the Swiss TV network TSR (Télévision Suisse Romande) has chosen the VEDA™ platform for its new playout automation system. The project called “CDD2010” will be set up by BFE with the objective to overhaul TSR´s broadcast center (Centre De Diffusion) in Geneva. The playout automation system will be installed for the two Premium channels, TSR1 and TSR2, and as of 2011 for thematic IP channels. The final system is expected to be on air during the second half of 2010.

The requirements for the new playout system

“The modernization of our broadcast center represents a strategic challenge that requires powerful and robust tools to accompany TSR in its future development,” said Blaise Guignard, Project manager at TSR. “After an in-depth market study, we have selected the VEDA™ solution from SGT, and BFE as our systems integration partner. The innovative features, the quality of the graphical interface, but also the adaptability of the system made the difference compared to other vendors.”

“TSR is a highly strategic project for SGT. It will allow us to demonstrate the advanced features of our VEDA™ offering. In addition, it will help us to accelerate our international growth and to develop new partnerships,” said François Chiche, Vice President Sales and Marketing at SGT. “The combination of our powerful VEDA™ suite and the professionalism of our integration partner BFE are key ingredients for the success of the solution.”

A reliable, secure and user-friendly solution

In order to ensure maximum systems availability, SGT and BFE will build a playout solution based on an active/active security cluster. The two VEDA™ Automation servers broadcast the same playlist and are synchronized. The VEDA™ Automation client complements the flexible and powerful VEDA™ platform to manage workflows and impresses with its ergonomics and its overall presentation – a key point for TSR in the final choice of the VEDA™ solution. The application can be organized to meet specific client needs and allows the workspace to be tailored through a graphical tool.

VEDA™ will integrate seamlessly into the IT broadcast environment at TSR, interfacing with all existing and to-be-deployed systems, and thus guaranteeing high flexibility and continuous operation. Through BXF services for example, VEDA™ will interface with the STRADA traffic system that programs the Premium channels. VEDA™ will also communicate with the existing media management system GICO that takes over the digitalization and archiving.

Furthermore, TSR puts a special emphasis on high-quality audio and dynamic branding: in an environment that – among other equipment – will be composed of the Nexio playout server from Harris, the Imagestore IS750 Master Control Switcher from Miranda, the Nexus audio router from Stagetec and the C8000 series audio processing components from Jünger, VEDA™ Automation allows working audio live from the source to respond to TSR´s requirements in terms of high-quality sound in 5.1 Discrete, Dolby E and stereo PCM. In addition, dynamic branding equipment is needed. In the case of the TSR implementation, SGT´s solution will integrate with Iconstation from Harris to ensure an excellent dynamic branding.

As of January 1, 2010, TSR (Télévision Suisse Romande) became Radio Télévision Suisse (RTS) following the merger of TSR and RSR (Radio Suisse Romande). It is part of the parent company SRG SSR idée suisse. RTS is a tri-medial company for the French speaking parts in Switzerland offering two TV channels (TSR 1 and TSR 2), four radio channels (La Premiere, Espace 2, Couleur 3, Option Musique), and an internet site that proposes programs over VOD and live streaming. The network addresses an audience of 1.8 million people. The headquarters are based in Lausanne and Geneva.

The company was founded in 1990 in France. Today, more than 60% of its business is generated outside of France.