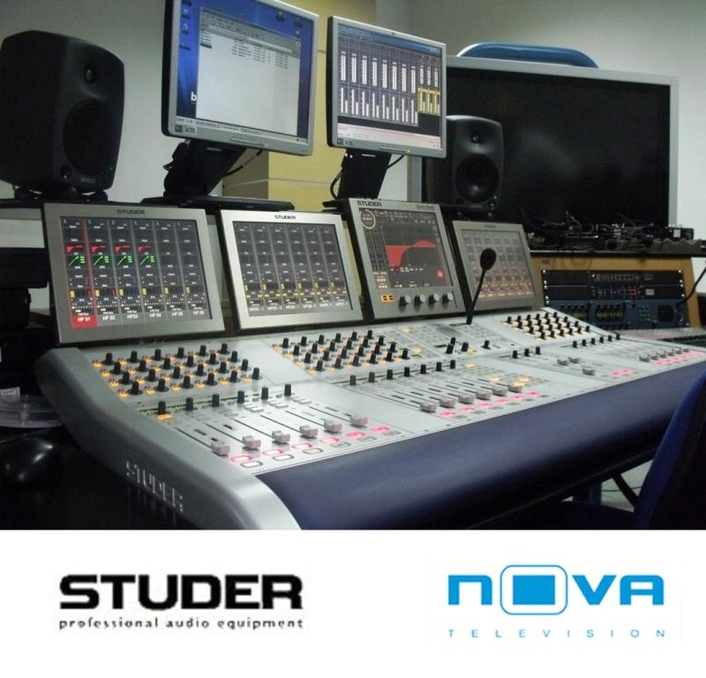 They also have two sixteen channel ADAT boards installed and the console is fed with AES Sync and a separate time code signal for internal clock synchronisation; all inputs and outputs are passed through patch-pannels.

There is an OnAir 3000 in both the live newsroom and the sports centre at Nova. Next May, the station will launch brand new sports channel (Nova Sport) broadcast directly from the Nova TV sports centre.

“Nova Sport will be produced by Diema, another TV company in the MTG group, but the main live production will come from Nova’s sports centre because it’s the best facility,” says Georgiev. “People find it much easier to work here and after coming from another company myself, I found the contrast to be incredible; the Studer sound quality is outstanding.” Nova TV has two local networks for its OnAir 3000 consoles, which are separate from each other and all other network domains. Vladimir Lazarov of Nova TV, said he’s been delighted with the scalability and flexibility of the system.

“The OnAir 3000s cover all operations in our two studios. I have been most impressed at its capability to connect several cores and consoles in one network and to use one console to control several cores,” he stated. “Being able to create presenter profiles is fantastic; every presenter has their own profile of settings, according to his or her voice and this helps us to uniform the sound, regardless of on-air personality.”