From outside broadcasts and sports reporting, to newsrooms and documentaries, the Sony XDCAM range, the most popular file base production system in Europe, continues to bring performance, flexibility and reliability to a number of productions. It makes it easier for users to accelerate their workflow with robust, nonlinear acquisition for both HD and SD production.

“XDCAM continues to deliver a superior workflow performance, and the sheer volume of users around the world certainly bears testament to this,” said Olivier Bovis, Business Group Head AV & Media. “Our growing customer base will continue to benefit from the evolution of our XDCAM family as our announcements at this year’s NAB will highlight. Such developments re-emphasise Sony’s continued commitment to our thousands of XDCAM users around the world.” 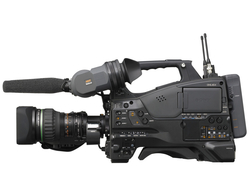 “XDCAM continues to deliver a superior workflow performance, and the sheer volume of users around the world certainly bears testament to this,” said Olivier Bovis, Business Group Head AV & Media. “Our growing customer base will continue to benefit from the evolution of our XDCAM family as our announcements at this year’s NAB will highlight. Such developments re-emphasise Sony’s continued commitment to our thousands of XDCAM users around the world.”At the end of last year, Sony announced the launch of the PMW-500 camcorder, the latest addition to its hugely popular XDCAM HD422 line-up. The PMW-500 represented the next step in the evolution of the XDCAM product range, becoming the lightest HD422 broadcast camcorder in the market, a “must” for journalists. The PMW-500 is built on the PDW-700 sensors and recording system, with the addition of operational speed of recording onto solid state SxS memory card and much lower power consumption. It is ideal for broadcasters, rental companies and freelancers looking for a versatile memory-based camcorder. Since its launch in October 2010, the PMW-500 camcorder sales to date across Europe have reached a total of more than 270 units, and major broadcasters including New Zealand’s TVNZ, Belgium’s RTL TVI and Germany’s WDR are amongst the first to already have placed large orders for this camcorder.

Sony signed a deal two years ago with Ireland’s public service broadcaster, RTÉ, to facilitate the station with its migration to a digital standard and high-definition tapeless environment. More recently RTE has continued the integration of Sony’s XDCAM product range into its TV operations. The deal saw Sony Professional deliver a broad range of its latest tapeless, multi-standard and multi-format production equipment which are being used in ENG camera activities and field editing, whilst working alongside RTÉ’s existing news and programme production systems. Some of the specific equipment ordered from the Sony XDCAM range were PDW-700 camcorders, PMW-EX3 semi-shoulder compact camcorders, PDW-HD1500 recording decks, PDW-R1 mobile recorder decks and PDW-U1 external drives.

Radiotelevisione Italiana (RAI), the Italian state owned public service broadcaster and the biggest television company in Italy, has taken further steps to embrace a complete HD and file based workflow by extending its use of disc technology operations over many areas of production, including National News, Sport, Special Entertainments events and Prime Time Fiction production. Since 2009, RAI has acquired a total of 300 Sony XDCAM HD 422 units for production operation, including 230 PDW-HD1500 Decks and 70 PDW-700 camcorders. Furthermore, Sony recently won the tender for the deployment of Sony XDCAM light camcorders for regional operation and Field News acquisition, including 60 PMW-EX1R and 35 PMW-EX3.

The Turkish Radio and Television Corporation, TRT Turkey, are currently expanding their XDCAM range with a significant order received in March for further Sony PDW-700 camcorders and PDW-HD1500 recorders for its newly established education channel, TRT Okul. Having selected XDCAM HD422 technology as part of its move to tapeless operation in 2008, TRT has so far purchased 64 PDW-700. This order came as a direct result of the new format adoption across the TRT entity and the ever increasing XDCAM material required by various departments.

Spanish broadcaster, TVE, has been a major driving force behind the transition to high definition in Spain. To continue its transition to HD, TVE recently awarded Sony Professional a tender to renew the equipment for its news department, documentaries, Centres in Production and Regional Centres. Over a period of three years, Sony will provide TVE with over 200 XDCAM-HD PDW-700 and XDCAM PMW-500 camcorders, more than 100 PDW-F1600 recording decks, 150 PDW-U1 drives and 25 PDW-HR1 field editors. In total Sony will provide more than 475 units of XDCAM equipment and 300 SxS card memories to TVE.

RTL TVI, the top French-speaking TV channel in Southern Belgium which reaches 3.9 million or 90% of all Belgian viewers via cable, has recently replaced its existing fleet of XDCAM PDW-510P camcorders with 22 of Sony’s XDCAM HD422 PMW-500 camcorders. The successful relationship between RTL Belgium and Sony dates back more than twenty years and the company has already invested in several systems from Sony, including the SX system, XDCAM and XDCAM HD. In addition, the Broadcasting Centre Europe, owned by the RTL Group, has chosen Sony’s codec MPEG2 HD422 50 Mbps as the broadcast file format of choice for all RTL channels.

In 2010, public broadcaster RTV Slovenia, made the decision to migrate to file based workflow for news, with further plans to migrate to HD in the near future. In October, Sony won the tender to implement its XDCAM EX workflow within RTV and subsequently delivered 11 PDW-500, 16 PMW-350 and 7 PMW-320 camcorders. PMW-500 was selected for the Ljubljana operation as it supports proxy, which is important for ingest in news system and 50 Mbps operation. PMW-350 camcorders will be mainly used by RTV Slovenia correspondents across the country.

Anadolu University, one of the pre-eminent innovative universities in Turkey which offers distance education programs, has chosen to invest in a number of Sony’s PDW-F800 camcorders to train its film students to create short films and film-like projects using hypergammas, filters and slow motion. The university provides its students with state-of-the-art products to give them the knowledge and experience in a wide range of production techniques; from film to documentaries, news operations to TV production.

Sony Professional, a division of Sony Europe, is the leading supplier of AV/IT solutions to businesses across a wide variety of sectors including, Media and Broadcast, Video Security and Retail, Transport & Large Venue markets. It delivers products, systems and applications to enable the creation, manipulation and distribution of digital audio-visual content that add value to businesses and their customers. With over 25 years’ experience in delivering innovative market-leading products, Sony Professional is ideally placed to deliver exceptional quality and value to its customers. Sony's Professional Services division, its systems integration arm, offers its customers access to the expertise and local knowledge of skilled professionals across Europe. Collaborating with a network of established technology partners, Sony delivers end to end solutions that address the customer's needs, integrating software and systems to achieve each organisation’s individual business goals.