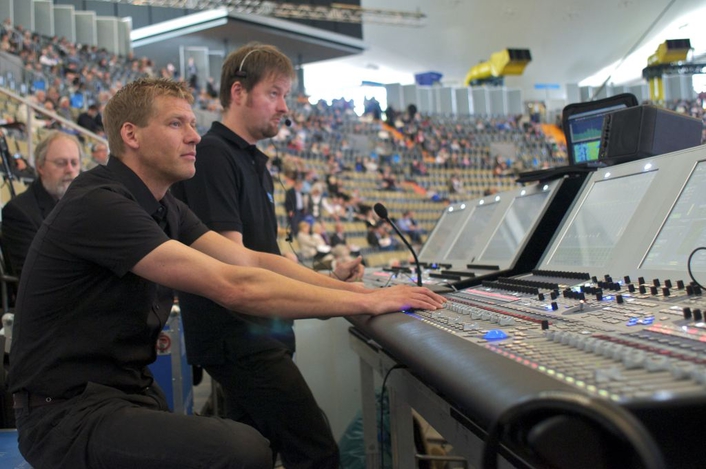 Audio Broadcast Services guarantees sound at the Allianz shareholder's meeting with Lawo Equipment
Mistakes must be avoided at all costs in case an entire event has to be rescheduled due to one single error. This can happen if a sound system breaks down for more than 20 minutes, or if the audio quality is inadequate. To prevent any such occurrences, Lawo’s daughter company Audio Broadcast Services (ABS) re-employed their successful strategy from the previous year and used their proven Lawo equipment for audio coverage of the Allianz SE shareholder’s meeting, called “Annual General Meeting”, held on May 5, 2011. ABS and Lawo collaborated in a successful and strong partnership during the project.

Audio Broadcast Services supplied the consoles, fibre optic cabling, engineering, setup, commissioning, and on-site support for the event, held at the Olympiahalle in Munich. The full service provider for event engineering, Gahrens und Battermann, contracted ABS for the second consecutive time. Gahrens and Battermann were given overall responsibility for the entire infrastructure, including logistics, for the third consecutive time.

A total of three Lawo mc²56 consoles were used. While one was allocated to the video control room, two consoles were installed as redundant FOH consoles. All feeds were required for the video stream (ie. the large monitors set up in the Olympiahalle) and the Internet stream, as investors were also able to follow the entire meeting live via the Internet.

The systems were designed with full redundancy. This applies to the router card, the DALLIS-I/O systems, the fibre optic cables, and microphone inputs for the speakers, as well as those set up for questions from participants. The former were split in the analogue domain and connected in parallel to two DALLIS Frames. The second DALLIS frame was connected to the second layer of the console, to allow manual switching at the push of a button. The microphone stations were opto-coupler controlled.

The main challenge was the installation of a fully redundant system. This included a redundant power supply, a system for the redundancy of all relevant microphones and sound reinforcement zones, as well as sound reinforcement via DALLIS I/O systems with both digital and analogue connections. Each DALLIS frame was equipped with an uninterruptible power supply to increase operational safety even further. Two days were scheduled to complete the event setup. For BMW’s (the German car manufacturer) shareholder meeting on May 12, 2011 at the same location, ABS was once again hired to provide the sound, using exactly the same equipment.

“Lawo’s technology offers precisely what we need for this kind of event: fully redundant systems that can be set up and taken down quickly, and offer a logical and simple structure for the user, that is easily monitored,” explains Matthias Paha, manager of ABS’ operational activities, when asked about the advantages of Lawo equipment. Concerning the audio quality of Lawo’s consoles, he adds: “As a FOH engineer, I use Lawo consoles myself for various events. It’s just great that the system provides such a high resolution and reproduces every nuance realistically, all without having to resort to the filters. Even if the internal filters and dynamics are used, it quickly becomes clear that you are dealing with a perfect tool that leaves hardly anything to be desired. It’s just great fun to work with these consoles!”

Philipp Lawo founded Audio Broadcast Services GmbH (ABS) in November 2005 as daughter company of Lawo AG. Over the years, ABS has become one of the largest rental companies in the audio market. As an independent rental partner, ABS offers audio systems and services for all kinds of broadcast applications. The focus lies on audio systems employing Lawo components, and is backed up by excellent system competency, thanks to close cooperation with Lawo, thereby guaranteeing a comprehensive service from first discussions to implementation. With their international experience, ABS’ competent teams can also take on a project’s entire logistics, configuration, and support, and are up to par with all requirements. ABS has realized small to mid-size projects with as much success as international mega events, such as soccer world cup competitions.