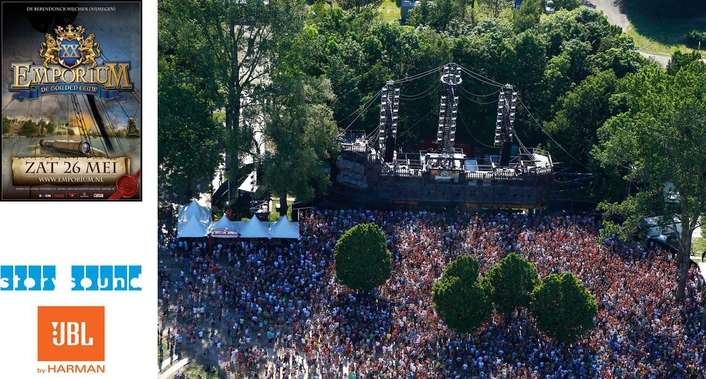 For the festival, Story Sound deployed almost 350 JBL loudspeakers, including 138 of the new VTX V25 full-range enclosures, powered by 190 Crown I-Tech HD amplifiers. This was the eighth edition of the popular event, which is held annually on the recreational area 'De Berendonck' just outside Nijmegen—and Story Sound has been there since the beginning.

The stage sizes then reduced from area to area, with the smallest containing five V25 loudspeakers per side.

Taking into account three wind directions, Story Sound installed a wireless measuring device to monitor the sound levels (which were restricted to 85dBA at 100 meters), set 100 meters behind three of the stages. “Since VTX is highly focused and offers us more controllability we could produce a higher overall sound level for the audience,” he explained.

Story Sound provided a sound technician to supervise each stage, with wireless laptop communication back to the central network control position in the production village, overseen on the HARMAN HiQnet™ platform by Story Sound’s Barney Broomer. “We could listen to the measuring microphone on the same network while we also had a range of Soundcraft desks—Vi6, Vi4, Vi1, Si Compacts on the smaller stages—so we could control the input of the DJ and monitor feeds, as well as the MCs’ microphones, using the dynamics of the desk,” said Story.

Each DJ was provided with two JBL VRX932 loudspeakers per side as high-class reference monitoring so they were not mistaken in thinking that the lack of sound bleeding back onto the stage was an indicator that their levels were too low.

In summary, Story believed the event was a massive success. “JBL’s Performance Manager™ is definitely an upgrade from System Architect, where we would have had to design so many custom panels [to achieve the same effect]. This has full input / output metering and thermal monitoring so that we could measure the temperature of the amps, side hangs and run a diagnostic,” he said.

The network had been rock-solid throughout, he confirmed. “It was a very fast and the stability of the Crown amps was very good. All DJ’s were extremely happy with the sound and the promoters were very happy—noting immediately the upgrade in sound quality.”