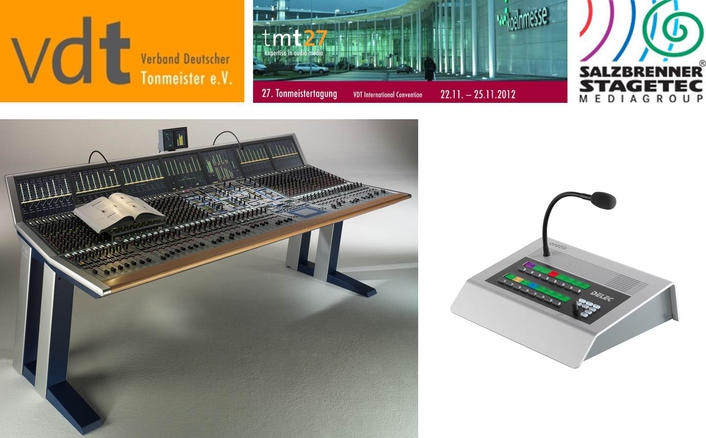 Award-Winning Stage-Management System, Dante™-Networks, Loudness Metering, and a Focus on Broadcasting
At this year's Tonmeistertagung, the SALZBRENNER STAGETEC MEDIAGROUP will show almost all their product lines, ranging from the compact ON AIR 24 self-op console to the large AURUS mixing-console system to the DELEC line of intercom and commentary systems. From a technical perspective, the MEDIAGROUP will focus on the integration of various systems – for example, the Dante™ interfacing between NEXUS, DELEC, or third-party products.

The accent will also be on Loudness metering. Measurements are made natively in NEXUS and NEXUS-based mixing consoles. The results can also be used in combination with the PINGUIN LndServer, probably the most powerful loudness-logging system available on the market today. These features enable convenient loudness control which is fully compliant with all relevant standards.

A visual and technical highlight at the MEDIAGROUP booth is the award winning new stage-management console for the Sydney Opera House in Australia. Based on DELEC oratis and MediaControl components it recently won the Melbourne Design Award 2012!.

The MEDIAGROUP will also present their new POLARIS touch, a mixing console which can be operated using a purely touch-screen user interface. MEDIAGROUP CEO Wolfgang Salzbrenner comments: “We already have shown our POLARIS touch on several occasions, and its innovative operating concept always gets an enthusiastic positive response!” In addition to touch-screen only operation, the POLARIS touch series also supports hardware controls such as faders, buttons and encoders. Each customer can thus order a custom control surface which matches his or her requirements exactly. The new system has already been taken up by the Bavarian Parliament, the Dresden Landtag Saxony as well as the UNIDO in Vienna.

MEDIAGROUP products have an important role to play even outside the exhibition booth: On Friday, the German Tonmeister Association (VDT) will offer an excursion1 to the dubbing rooms, Studio B, and the main control room of the WDR TV service. On the audio side, all these installations are based on STAGETEC systems – notably the large AURUS digital mixing console and NEXUS audio network. The SALZBRENNER STAGETEC MEDIAGROUP is supporting this excursion by providing coach transport from the convention centre direct to the WDR premises. For more information, visit booth 030, or ask when registering for the excursion.